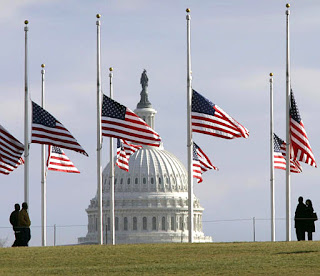 There are many points of disagreement I have with the Libertarians, but upon the spirit of this point, I agree with them:

The Income Tax: Root of all Evil, by Frank Chodorov

...The Constitution, then, kept the federal government off balance and weak. And a weak government is the corollary of a strong people.

The Sixteenth Amendment changed all that. In the first place, by enabling the federal government to put its hands into the pockets and pay envelopes of the people, it drew their allegiance away from their local governments. It made them citizens of the United States rather than of their respective states. Theft loyalty followed theft money, which was now taken from them not by their local representatives, over whom they had some control, but by the representatives of the other forty-seven states. They became subject to the will of the central government, and their state of subjection was emphasized by every increase in the income-tax levies.

The state governments likewise lost more and more of their autonomy. Not only was their source of revenue being dried up by federal preemption, so that they had less and less for the social services a government should provide, but they were compelled in their extremity to apply to the central authorities for help. In so doing they necessarily gave up some of their independence. They found it difficult to stand up to the institution from which they had to beg grants-in-aid. Furthermore, the federal government was in position to demand subservience from the state governments as a condition for subventions. It has now become politically wise for governors, legislators, and Congressmen to "play ball" with the central government; they have been reduced to being procurement officers for the citizens who elect them. The economic power which the federal government secured by the Sixteenth Amendment enabled it to bribe the state governments, as well as the citizens, into submission to its will.

In that way, the whole spirit of the Union and of its Constitution has been liquidated. Income taxation has made of the United States as completely centralized a nation as any that went before it; the very kind of establishment the Founding Fathers abhorred was set up by this simple change in the tax laws. This is no longer the "home of the free," and what bravery remains is traceable to a tradition that is fast losing ground.

For those of us who still believe that freedom is best, the way is clear: we must concentrate on the correction of the mistake of 1913. The Sixteenth Amendment must be repealed. Nothing less will do. For it is only because it has this enormous revenue that the federal government is able to institute procedures that violate the individual’s right to himself and his property; enforcement agencies must be paid. With the repeal of the amendment, the socialistic measures visited upon us these past thirty years will vanish.

In and of itself, repealing the 16th amendment would not cure all our evils, the 17th Amendment which removed the hierarchical structure of the constitution, by making the election of Senators directly into the hands of 'the people', rather than through their State legislatures, as it was designed, is also critical. And of course, the repeal of all Educational funding and all regulations regarding mandatory public education are equally critical to be repealed - but even that won't fix things, not without a populace sufficiently educated to understand what to do with themselves, as opposed to relying on Government to do it for them.

As Bastiat put it: "The state is the great fiction by which everybody tries to live at the expense of everybody else." - and by which they seek to escape not only the expense, but the responsibility, of, and for, their own lives.

I don't have time to do the topic justice at the moment, but I do intend to as I close out the "Liberal Fascism" posts, but on this, the Fifteenth day of April, a day proper for mourning, I didn't want to let pass without a comment.

And when we are tempted to think of our Founding Fathers as all wise political demigods (which they damned near were), it is good to remember that they made mistakes too, they sought to turn a blind eye to some dangers as well. In the ratification debates on whether or not to adopt the Constitution, one of the Anti-Federalists commented on Article 1, Section 8, Clause 1, by An Old Whig Fall 1787:

"The advocates of the proposed constitution, seem to be aware of the difficulty I have hinted at, and therefore it is, I presume, that in conversation as well as in their publications, we are told that under the proposed constitution, "direct taxation will be unnecessary"; that "it is probable the principal branch of revenue will be duties on imports." Some of those who have used such language in public and private, I believe to be very honest men; and I would therefore ask of them, what security they can give us, that the future government of the continent will in any measure confine themselves to the duties upon imports, or that the utmost penny will not be exacted which can possibly be collected either by direct or indirect taxation? How can they answer for the conduct of our future rulers?"

To put it mildly: He had a point - would that Madison had worked a further Right into the original Bill of Rights. But of course, that's unfair, no codifications will ever be able to substitute for thought and understanding - lose that activity of mind and soul, and no words can substitute (See Political Loathsomeness and The Enumerated Powers Act by Walter Williams for a pertinent example).

I revere the Founding Fathers, and the U.S. Constitution, but we should not ignore or lose sight of the Anti-Federalist's comments in our studies of the Constitution...those of us that is, who even bother to study it at all.