President Trump lands an ace of a speech, and shows off his mad Political-Fu skills

A couple quick thoughts before bed, on Trump's speech to a joint session of Congress.. Although I had a positive response to it, overall, especially in the 'political-fu' of it, there were several things that I liked, and several that I disliked about Trump's speech, and some I was delighted to be surprised by.

Being that eliminating the Administrative State is my highest political priority, on the road to returning us to a nation of laws dedicated to upholding individual rights under the rule of law, and defending our people from all enemies, foreign and domestic, you can probably guess what 'sent a thrill up my leg'.


"...creating a deregulation task force inside of every Government agency..."

, was music to my ears. As were those geared towards seeing to our military and law enforcement, and the various 'draining the swamp' measures. For those asking the easy question 'If reducing regulations is good, why not just eliminate the agencies?' There are no magic means of doing that, and as frustrating as it is, government can only be reduced by governmental means. Baby steps. It took us 140+ years to get here, no president is going to rid us of them armed only with a phone and a pen.

The surprises, were he didn't go for bombast, he didn't call out congress or the press, and, amazingly, he turned several promising 'Do a shot when you hear___' Memes into a dry, temperance fest of an evening, by not saying "Believe me!" or "let me tell you!" a single time.

But there were a number of things that were disturbing. What seems to be his idea of handling several issues, from infrastructure, to education, by means of "Public/Private partnerships", those alarm me. Such partnerships are conduits for politically driven favoritism, corruption, and expanding the reach and depth of the administrative state - the very things I'm thrilled that he is intent upon reducing.

While removing barriers to selling health insurance between states is a big plus, and repealing ObamaCare is a HUGE plus, when he appends '... and Replace' to the 'Repeal', it disturbs and infuriates me just as much today, as it did when I first heard Boehner floating it, years ago.

Trade Deficits are protectionist bogeymen, and pursuing them is very likely to damage the economy he is intent upon aiding... and so on, see-sawing back and forth through the speech.

So yes, overall it was an excellent speech, he completely disarmed and flummoxed the foolish democrats in their white dresses and sour faces. There was much in it to raise hopes, but also a fair measure to warrant heightened alarms.

Would Judge Gorsuch on the Supreme Court be some of that promised 'Winning'? Maybe so!

Well. I'm late to the SCOTUS party and just getting started on looking into Judge Neil Gorsuch's legal opinions, but... suffice to say that for the moment, it's looking good. While skimming various bios of him last night, my attention was caught by this bit from the Atlantic, 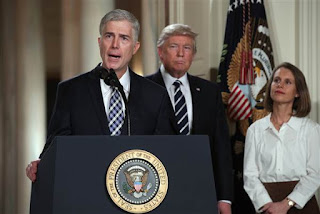 "...The most remarkable thing about the book is its measuredness. Gorsuch is a Jesuit-educated Episcopalian, but he does not rely on theology to make his argument. In fact, he takes pains to ground his work in “secular moral theory,” laying out a careful case based on the writings of thinkers from Aquinas and Epicurus to contemporary scholars Peter Singer and Ronald Dworkin. His work reads more like a philosophy paper than a legal brief, which is appropriate given his background: He holds a doctorate in philosophy from Oxford.

Gorsuch reveals a few interesting lines of thinking in his book. First, it’s clear that he’s deeply interested in fundamental moral principles. The common wisdom around his nomination is that he’s an originalist, reading laws and the Constitution based on their authors’ intended meaning. During his nomination announcement, he emphasized this principle: “I respect … the fact that in our legal order it is for Congress and not the courts to write new laws,” Gorsuch said. “It is the role of judges to apply, not alter, the work of the people’s representatives.”..."[emphasis mine]

This was especially timely, in that I was just grousing to folks, about how, with the rare exception of someone like Justice Clarence Thomas, few in our courts have much, if any, regard for the concepts of Natural Law that our Constitution was drawn out of in our Founder's Era. Instead, we've had to settle for, at best, the more primitive modernist 'Originalists' and 'Textualists' - and now here this fellow Gorsuch is sounding as if I may have to, well, not quite 'eat my words', but I may possibly have to nibble on them a bit. Around the edges.

And frankly, that's the kind of crow I'd gleefully chow down on all day long - fingers crossed!

Then this evening, in the first opinion I selected, his concurring opinion (starting on about pg 15) in Gutierrez-Brizuela v. Lynch, 834 F.3d 1142 (10th Cir. 2016), which focuses upon how Administrative Agencies have been allowed to overstep their power (to say the least (which the 'Chevron' case is referring to), the concurring portion starts with a Bang! and keeps getting better, and better.


"There’s an elephant in the room with us today. We have studiously attempted to work our way around it and even left it unremarked. But the fact is Chevron and Brand X permit executive bureaucracies to swallow huge amounts of core judicial and legislative power and concentrate federal power in a way that seems more than a little difficult to square with the Constitution of the framers’ design. Maybe the time has come to face the behemoth..."

, and they just keep coming,


"...Even more importantly, the founders considered the separation of powers a vital guard against governmental encroachment on the people’s liberties, including all those later enumerated in the Bill of Rights. What would happen, for example, if the political majorities who run the legislative and executive branches could decide cases and controversies over past facts? They might be tempted to bend existing laws, to reinterpret and apply them retroactively in novel ways and without advance notice. Effectively leaving parties who cannot alter their past conduct to the mercy of majoritarian politics and risking the possibility that unpopular groups might be singled out for this sort of mistreatment — and raising — along the way, too, grave due process (fair notice) and equal protection problems. Conversely, what would happen if politically unresponsive and lifetenured judges were permitted to decide policy questions for the future or try to execute those policies? The very idea of self-government would soon be at risk of withering to the point of pointlessness. It was to avoid dangers like these, dangers the founders had studied and seen realized in their own time, that they pursued the separation of powers. A government of diffused powers, they knew, is a government less capable of invading the liberties of the people. ..."


"...But however that may be, none of it rescues us from our riddle. For whatever the agency may be doing under Chevron, the problem remains that courts are not fulfilling their duty to interpret the law and declare invalid agency actions inconsistent with those interpretations in the cases and controversies that come before them. A duty expressly assigned to them by the APA and one often likely compelled by the Constitution itself. That’s a problem for the judiciary. And it is a problem for the people whose liberties may now be impaired not by an independent decisionmaker seeking to declare the law’s meaning as fairly as possible — the decisionmaker promised to them by law — but by an avowedly politicized administrative agent seeking to pursue whatever policy whim may rule the day. Those problems remain uncured by this line of reply"


"...Even supposing, too, that we could overlook this problem — even supposing we somehow had something resembling an authentic congressional delegation of legislative authority — you still might wonder: can Congress really delegate its legislative authority — its power to write new rules of general applicability — to executive agencies? The Supreme Court has long recognized that under the Constitution “congress cannot delegate legislative power to the president” and that this “principle [is] universally recognized as vital to the integrity and maintenance of the system of government ordained by the constitution.” Marshall Field & Co. v. Clark, 143 U.S. 649, 692 (1892). Yet on this account of Chevron we’re examining, its whole point and purpose seems to be exactly that — to delegate legislative power to the executive branch..."


"...Even under the most relaxed or functionalist view of our separated powers some concern has to arise, too, when so much power is concentrated in the hands of a single branch of government. See The Federalist No. 47 (James Madison) (“The accumulation of all powers, legislative, executive, and judiciary, in the same hands . . . may justly be pronounced the very definition of tyranny.”). After all, Chevron invests the power to decide the meaning of the law, and to do so with legislative policy goals in mind, in the very entity charged with enforcing the law. Under its terms, an administrative agency may set and revise policy (legislative), override adverse judicial determinations (judicial), and exercise enforcement discretion (executive). Add to this the fact that today many administrative agencies “wield[] vast power” and are overseen by political appointees (but often receive little effective oversight from the chief executive to whom they nominally report), and you have a pretty potent mix... "

My initial reaction to all of this?

I'm feeling like I'm in judicial heaven, or at least the Court Candy Store... but... that's a first impression. And yes, I've heard some folks complaining that he didn't come out with a full throated defense of the 2nd Amdt in another case - worrisome, but it's a bit difficult to see how that gibes with the ideas put out in this case - if he is stays consistent with the ideas dealt with here, having this judge on the Supreme Court, would be a big step back onto the road to restoring the Rule of Law.

Still though, I've got quite a bit more reading to do before I really buy into it - good or bad.

But so far? This is the kind of 'Winning!' that I could get used to.
Posted by Van Harvey at 10:41 PM No comments: