President Trump lands an ace of a speech, and shows off his mad Political-Fu skills

A couple quick thoughts before bed, on Trump's speech to a joint session of Congress.. Although I had a positive response to it, overall, especially in the 'political-fu' of it, there were several things that I liked, and several that I disliked about Trump's speech, and some I was delighted to be surprised by.

Being that eliminating the Administrative State is my highest political priority, on the road to returning us to a nation of laws dedicated to upholding individual rights under the rule of law, and defending our people from all enemies, foreign and domestic, you can probably guess what 'sent a thrill up my leg'. 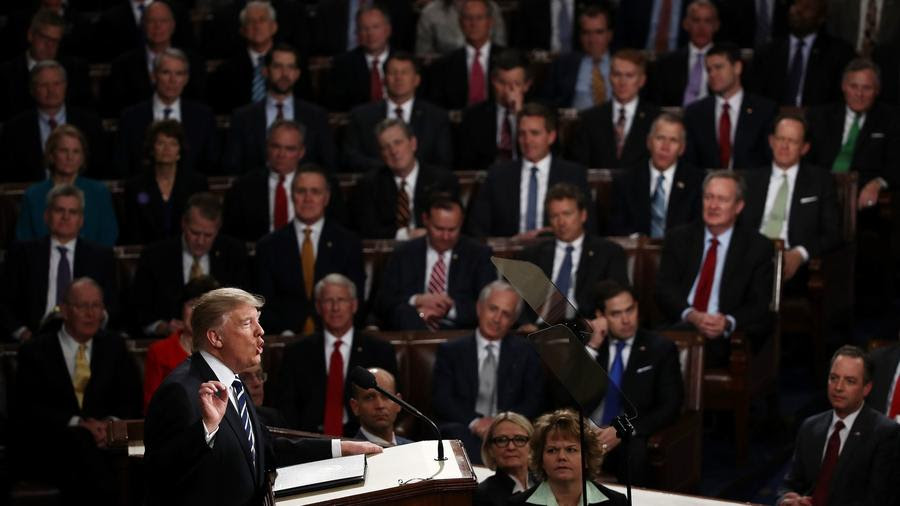 
"...creating a deregulation task force inside of every Government agency..."

, was music to my ears. As were those geared towards seeing to our military and law enforcement, and the various 'draining the swamp' measures. For those asking the easy question 'If reducing regulations is good, why not just eliminate the agencies?' There are no magic means of doing that, and as frustrating as it is, government can only be reduced by governmental means. Baby steps. It took us 140+ years to get here, no president is going to rid us of them armed only with a phone and a pen.

The surprises, were he didn't go for bombast, he didn't call out congress or the press, and, amazingly, he turned several promising 'Do a shot when you hear___' Memes into a dry, temperance fest of an evening, by not saying "Believe me!" or "let me tell you!" a single time.

But there were a number of things that were disturbing. What seems to be his idea of handling several issues, from infrastructure, to education, by means of "Public/Private partnerships", those alarm me. Such partnerships are conduits for politically driven favoritism, corruption, and expanding the reach and depth of the administrative state - the very things I'm thrilled that he is intent upon reducing.

While removing barriers to selling health insurance between states is a big plus, and repealing ObamaCare is a HUGE plus, when he appends '... and Replace' to the 'Repeal', it disturbs and infuriates me just as much today, as it did when I first heard Boehner floating it, years ago.

Trade Deficits are protectionist bogeymen, and pursuing them is very likely to damage the economy he is intent upon aiding... and so on, see-sawing back and forth through the speech.

So yes, overall it was an excellent speech, he completely disarmed and flummoxed the foolish democrats in their white dresses and sour faces. There was much in it to raise hopes, but also a fair measure to warrant heightened alarms.