So Attorney General Jeff Sessions recused himself, in response to a spurious, baseless, charge. Was this an admirable act of selflessly sacrificing himself to maintain the appearance of justice? Is he rising above "... any semblance of a conflict of interest...", by appeasing the calls of those who have no concern for impartiality, or truth, or justice?

His action today lifts no one, ennobles no process, and is itself a form of injustice. It's a dereliction of duty, sacrificing that Justice which he has been put in office to defend. His action will reduce no political temperatures for the Trump administration, but will only serve as a means to turning up the heat. Why is it that the Right positively loves indulging in and bathing in these waters of judicial snake-oil, do they really think that they look good preening in them before the media, and the nation?

It is unsightly and obscene.

Am I going too far? I wish. There was no honest question of propriety involved here, only the Left's relentless pursuit of an opening, any convenient pretext, to gain political benefits for themselves by means of the media, which they have not been able to achieve through public elections.

This is the main exchange that is being manipulated against Attorney General Sessions:


"SEN. PATRICK J. LEAHY: Several of the President-elect's nominees or senior advisers have Russian ties. Have you been in contact with anyone connected to any part of the Russian government about the 2016 election, either before or after election day?" the Vermont Democrat asked in a questionnaire.

He was asked if he had been in contact with any member of the Russian government 'about the 2016 election', and he answered, 'No'.  Did that question, or his answer to it, in any way imply that he had not met with representatives of the Russian Govt at all?

Why? Because as a member of the Senate Armed Services Committee, it would be not at all unusual for him to have met with ambassadors from other nations, including Russia, as a part of his job, and his having done so in that capacity, does not impact the answer he gave in any way, shape or form, not even if he were running for his own re-election, because it is part of such a senator's job. Even my own Senator from Missouri, Sen. McCaskill did, although she claimed that she'd never met with a Russian Ambassador in her position as a senator on that same Armed Services Committee, which Twitter and the Washington Post quickly showed to be a, by Democrat standards, blatant lie. 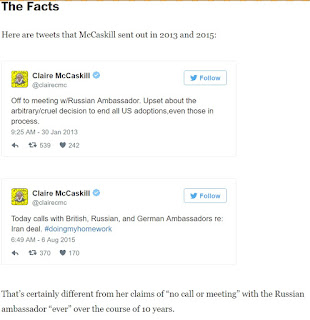 Are we to presume then, that, as a Democrat herself, that she now intends to tender her resignation in an attempt to live up to those same preposterous standards she demands of the Right?

No? Huh. Such a surprise.

Sessions should not have even offered a verbal 'PC Penance' of '... despite appearances, in fact...'. Instead, he should have called out these deceptive, dishonest, manipulative allegations, as being what they are, and continued on with the business he was put in office to do.

Instead, following the traditional GOP passion for publicly preening in ritual acts of political self mutilation, he chose to recuse himself from those duties that, if he cared about Truth and Justice, he should have diligently insisted upon personally overseeing, with extreme care and attentiveness, because that's what he owes, not to the media, but to the American people, on whose behalf he is now serving as Attorney General.

Instead, we're treated yet again to the GOP's preferred means of parading about in their political stigmata, by indulging, again and again, in actions that are the equivalent of those who cut and scar themselves for attention, offering up the plaintive cry:


'Aren't our wounds admirable and impressive?!'

The truly despicable truth is, that the GOP's indulging in these actions gives the left's deliberate lies and aspersions a sheen of credibility, serving to empower and embolden their efforts to increase their own ill-gotten political powers, by any means necessary. And this recusal will fuel and intensify their pursuit of those powers.

Will it accomplish anything at all for the GOP? No. Will it encourage the Pro-Regressive Left to treat them more fairly? No. Will it lessen pressure on the Trump administration? Hell no. Will it in any way shape or form enable the GOP to better uphold and defend justice for the people of the United States of America? No.

Will it weaken the GOP's ability to faithfully advance what they were elected by the people of the United States of America to do? Yes. Will that weakness encourage the left in its pursuit of even more power? Yes, it absolutely will do that.

For this, President Trump ought to tell Jeff Sessions: "You're fired!"

There are a lot of things that I take issue with Trump on, but in this case, I'd like to see a lot less GOP/Reince Preibus - Trump, and a lot more News Conference-Trump, something like 'This is a fake story and we're not going to treat fantasy as reality, so sit down!'

Instead...it's times like this that 'the Right' disgusts me, and I am so proud to Not be a member of the GOP.