'There's a spectre haunting America, the spectre of Constitutionalism' - The Road Not Taken to Making Americans American Again

I shared a post last week that I found hopeful, concerning a small but successful program at a sizable Ivy League University that's pursuing 'Wisdom First, Job Skills Second' (which is both surprising and new for today), through studying key works in the development of Western Civilization, and the foundations of a free society. At about the same time, a friend of mine shared a post about a 'name' Republican considering a move to the Libertarian party to run for President in 2020, which seems neither new, surprising, nor hopeful to me. The paths that these two posts propose, diverge into a future which we all hope will be better and brighter, and while they aren't mutually exclusive roads, I suspect that once we take one path, we won't get a chance for a do-over. So my question is, which road do you think is better suited to make all the difference for us, and why? Which road do you think we will have to make excuses for somewhere in the future, when we tell our grandchildren about the one we traveled by? 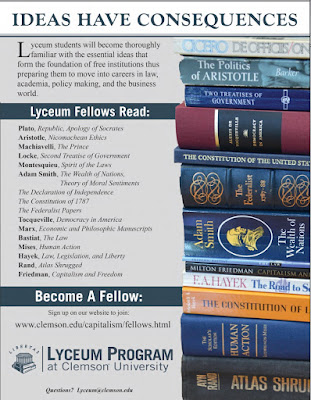 This is the post my friend Lloyd, a small 'L' libertarian [see my update to this, from Lloyd, below] who identifies as a Whig (you'd have to ask him), shared on the continuing struggle between Republicans & Libertarians over those who self-identify as fans of "Liberty!",


"...Libertarian Party leadership is now urging Justin Amash to run for President and make a third party challenge to the sitting President, Trump. According to Roll Call, the Michigan Republican told h…"

To which he commented with a mixture of sense and something else:


"Republicans will NEVER shrink this government AND they CANNOT be reformed from within. (Trump was the party's last chance.)
It does NOT prove the LP is the answer. It DOES prove it's gonna take a different party than donkeys or elephants, or the nation is lost.
A word to the wise-- however few of us remain."

As long as I've known him, one of Lloyd's fondest ambitions has seemed to be to see our current two party system upended or ended - particularly in regards to the GOP - and with each passing year I see even less wisdom in the prospect of such 'News!' as that. Not, as my friend persistently presumes, because I somehow 'support' the GOP (I have not been a supporter since George 'Read my lips: No new taxes" Bush 41), but for at least two other reasons:


First, because I think that it is truly hopeless to look to political parties or politicians for meaningful solutions, which presume (and require) ideas and positions which the majority of the electorate are neither knowledgeable about, nor have they shown any signs of interest in, or of even being open to considering - politics is the natural end result of that process, where an idea has bubbled up from the grass roots into a political hot-button, but politics is not the starting point of that process, and behaving as if it is, is getting it all wrong.
Second, given our current situation where We The People as an electorate are facing an unprecedented threat to liberty under limited government, by a Democrat Party which is now largely and openly identifying as being 'Democratic Socialists', it seems self-evidently foolish to pursue a path that must mean dividing the ability of 'The Right' to provide political resistance to the opposing party's efforts to gain power over our lives.

No matter how enthusiastic the libertarians are, there is no evidence of massive popular support for some alternative set of political ideas that have people champing at the bit to rush into the voting booth in support of them. Instead of popular bottom up demands for a new party, these are the top down calls of the soph-infatuated who want to shove their political influence down into the power of popular opinion, and I'm sorry, but it just doesn't work that way.

And although the second of those reasons is the more urgent, the first is the more important. As bad as I fear the electoral repercussions of a 3rd or 4th party would be, I think the inevitable failure that would result from the success of such a political agenda, would be even worse. The citizenry have to, at the very least, be already inclined towards, and open to, the new ideas and solutions being peddled to them, before they can be led in supporting them - but to succeed at doing the reverse of that, would require the mass use of force animating mass action through emotional zeal, rather than sober resolve, and that must end in disaster. That's not just my oh so humble opinion, but that of History's as well, which you can get a fair grasp of by looking at two contrasting sets of such revolutions: England's 'Glorious Revolution' and the American Revolution, both of which were successfully carried forward upon the strength of the people's support for their ideas; as against the French Revolution and the Russian Revolution, which sloganeered a largely ignorant and riled up people, into embracing tyranny and genocide. This snippet from Alexander Solzhenitsyn's short address on the subject gives a hint at the issue, and the full address is well worth reading,


"...It is now better and better understood that the social improvements which we all so passionately desire can be achieved through normal evolutionary development--with immeasurably fewer losses and without all-encompassing decay. We must be able to improve, patiently, that which we have in any given "today."
It would be vain to hope that revolution can improve human nature, yet your revolution, and especially our Russian Revolution, hoped for this very effect. The French Revolution unfolded under the banner of a self-contradictory and unrealizable slogan, "liberty, equality, fraternity." But in the life of society, liberty, and equality are mutually exclusive, even hostile concepts. Liberty, by its very nature, undermines social equality, and equality suppresses liberty--for how else could it be attained? Fraternity, meanwhile, is of entirely different stock; in this instance it is merely a catchy addition to the slogan. True fraternity is achieved by means not social but spiritual. Furthermore, the ominous words "or death!" were added to the threefold slogan, effectively destroying its meaning...."[bold in original]

Now, am I saying that if Libertarians succeeded in unseating the GOP, without the public wanting and understanding their positions, that they'd devolve into a bloody revolution? Well of course not! How ridiculous to suggest that freedom loving people could do such things. In fact, like Jefferson, I'd say the prospects of that were an outrageous suggestion, as obviously such a liberty oriented movement would never cost a single life! Of course... Thomas Jefferson said that very same thing... just a month before the riots began that kicked off the French Revolution's downward spiral, eventually devolving into tyrannical bloodshed and genocide (the Vendee is what Alexander Solzhenitsyn was referring to