Wanna see something really scary? How about looking at what your political positions are based upon...?!

Are you upset about the political climate today? Do you sometimes wonder who is to blame? Well, Trick or Treat, I think that I can help you with that.

Do you have political positions that you support? Good... good, good. Now let me ask you a couple questions, 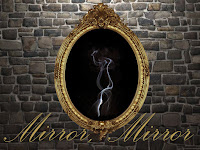 Now of course, if your answer is they came from family, friends, church, feelings, traditions, school, economics, that's fine... that's a start, no worries. But of course, now you need to ask where they (yes, even the professors, and even the authors of the books they're quoting from) got those positions from, and on what basis it is that they, and you, claim to know them to be true.

Because you see, if that's the case, that your positions are simply other people's positions with no known - to you - basis in reality for them, then we've just identified where your ability to reasonably disagree and discuss your political positions ends, and where your role in the worsening political climate of today begins! Yep, that's right, mystery solved - you're to blame! 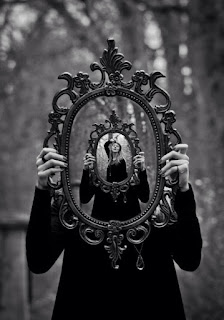 Well... at least partly. Why? What are you going to say when any political discussion you enter into, reaches that point where you know nothing more to say? What can you say, but 'Well.. my [family, friends, church, feelings, traditions, school, economics] are better than yours!'?

What else is there left to go to from there? Only anger's many masks of laughter, dismissal, derision, insult, and in the end, the bottom line of spittle spewing fury.

Do you still wonder who is to blame for the angry nature of our political climate today? Find a mirror. Look into it. Seriously.

But here's the good news: If you don't like that answer, and if you really do care about the sorry state of discourse in our society today, then there is something that you can do about it. All you have to do is try to get a better understanding of what your own positions are based upon. And then discuss them with someone else who is willing to admit that they don't know what their positions are based upon, either. Seriously - it's not as if it's going to be difficult to find someone else like you. Right? And no, that wouldn't be a case of the blind leading the blind, but one of the sighted learning to see.

Do that, and you will be taking an active hand in fixing the nature of the discourse in our society today.

Oh, and BTW, it might help to recall that this nation, and our liberty, were not founded upon either 'The Declaration of Independence' or 'The Constitution', but upon the (then) commonly known and understood ideas which those documents summarized and codified. It was because those ideas could and were understood, that we our nation could be founded upon them. As Jefferson said of the ideas behind the Declaration of Independence, that their,


"... authority rests then on the harmonizing sentiments of the day, whether expressed in conversation, in letters, printed essays, or in the elementary books of public right, as Aristotle, Cicero, Locke, Sidney,..."

If you really want to make a difference, try doing something different: think about, and try to understand, the 'Rights' you're 'talking' about, before you leap straight into arguing over them.

This Halloween, remember what's really scary to those who've been doing their best to keep you trapped in that hall of mirrors: You, reading, and discussing, those 'elementary books of public right', such as these: 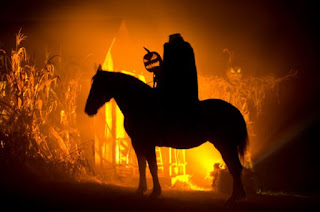 Be the Horsemen, headless no more.

I do think it's time to re-post this, from Columbus Day, 2015 - Why? Because after a few weeks of being bombarded with unsubstantiated charges and hysterical outrage from the most outrageous folks imaginable, I think it's time, even with as small a nod as this is, to explicitly disregard the rantings of the failed and the botched, and to lift a glass of cheer and celebrate the heroic adventures of those who actually dared to do what others feared; deeds which, even though tinged with a great deal of error, led to the greatest advances for mankind in all of our nations known histories. Celebrate this day, even moreso, because everything it represents is loathed and feared today by those who oppose celebrating this day, even moreso than was the voyage that Christopher Columbus undertook to take in 1492.

Posted by Van Harvey at 8:07 PM No comments: