Elections do have consequences - including being governed by who you've elected

If there's one thing that the 21st Century has made abundantly clear, is that elections have consequences - not the least of which is our suffering to be governed by those we've elected into office. Simple buyers regret, however, is not in and of itself a valid basis for reversing the decision of the electorate, and the progressive normalization of such behavior as we've been witness to of late, is, IMHO, a growing threat to representative government. 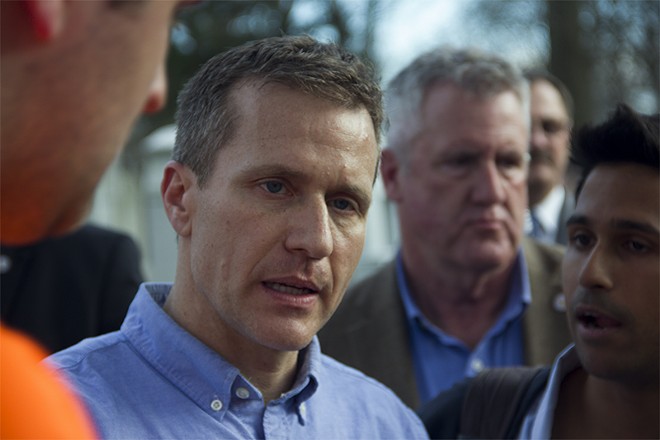 Elections do have consequences, but there are even worse consequences to be had from overturning elections. It is irresponsible, and not a little dangerous, to demand that elected officials be forced from office over unsubstantiated charges, with no other basis than the fervent opinions of some. And please do not resort to claiming that


"I have a right to my opinion! it doesn't have to stand up to a court of law!'

, you do have a right to your opinion, but your opinion alone is not a justifiable cause for demanding that the opinions of an entire state's (or nation's) electorate, that were voiced, tallied, and duly recorded in an election, should be overturned. The 2016 election is done and over, and the 'will of the people' was made known, and short of a radical change in the nature of the charges against our sitting governor, that election must stand, and if you care about our form of government, you should not demand it be otherwise.

Much as I dislike Eric Greitens - and I wrote several posts explaining why - I will not ignore the fact that unsubstantiated accusations and rumors against him, like any other form of 'sources say', is not a valid basis for my desiring that the will of the entire electorate, be reversed.

Especially not when we have nothing more before us at this point in time, than anonymous accusations which have been made without a shred of proof (and no, an unnamed disgruntled husband, allegedly recording the tearful accusations of his unnamed wife/ex-wife without her knowledge of his doing so, does not qualify as a shred of proof). Short of Gov. Greitens being convicted of, or admitting to, having committed blackmail or some other serious crime, whether or not he stays in office is not a proper consideration or justifiable choice for you or me to call for, and frankly it's not even properly his choice anymore - unless he knows himself to be guilty of blackmail, he should not step down - he is in that office because the electorate duly elected him to be there, and outside of the established paths for recall or impeachment, that is where he should stay for the duration of his term.

I understand your displeasure over discovering that he admitted cheating on his wife prior to his election, but that is not a valid basis for demanding an election be overturned - if that truly displeases you, perhaps pay a little closer attention to details of character, and demand explanations for major changes in stated beliefs, in future elections. Neither is there any valid basis for demanding that he resign because he doesn't 'network' with lawmakers and grassroots activists, as some might have hoped he would have. But worse by far, is for elected representatives to council him to resign - not because they know him to be guilty, but because they fear that a trial would be painful and uncomfortable - that is truly craven, despicable advice, and is dangerous to the continued prospects of representative government.

Do you seriously want to make removing an elected official, something that can be overturned on the basis of allegations alone? Allegations that are made by unnamed individuals, based upon a 'crime' they were privately told about by someone else? A 'crime' that the supposed 'victim' has not even come forward theirself about? Let alone without having even pressed formal charges?!

WTH is passing for 'conscientious consideration' here?! What the hell is wrong with you people?! If you want him out of office, then at the very least have the stones to begin a recall campaign - but I'd recommend that you have something more that you can substantiate first. Like the 'victims' name. And actual charges filed by that victim. And maybe a trial. Or a confession. First.

Do I think that it's possible that he engaged in blackmail? Have you heard his threatening conversation with John Brunner during the election? Have you heard about his belittling conversations with 'beady eyed' lawmakers? Yeah, I would be entirely unsurprised to learn that he sought to intimidate someone into silence, for his own convenience. But guess what - my suspicions do not become worthy of overturning the results of a clear election, simply because I think that they're valid!

I do not like Eric Greitens. I wrote numerous posts (here, and here, and here, and here, and here) saying why I thought he was unworthy of being elected our governor. However my point of view did not win the election. Those who voted for him for Governor, did win. By virtue of our system of representative government, he was elected by We The People - it would be a gigantic mistake to now demand that he resign his office because of unnamed sources, on unsourced, unsubstantiated, and unproven, accusations.

It's worth remembering, however, when you are faced with a choice like this again, before an election for instance, that it's best to choose those who are the most unlikely to find themselves the butt of unsubstantiated charges. What you can do to avoid that in the future, is to learn that 'hope is not a strategy' - that hoping that the fellow who claims he's a conservative, with no further reason or explanation given for that claim than the thinnest of appearances, really is a conservative, is folly and negligence of the highest order. Learn from that. Help your neighbor to learn from that. Because discovering that the guy that you helped get elected, isn't who you'd hoped he was, isn't enough to 'fix' that election after the fact.

I'll close out by leaving this snippet here from my first post having to do with Eric Greitens, "Is being Great all that good?" post back in 2015,

I'm saying that it's not their great qualities that concern me, but the little knowledge, understanding and conviction they've yet to demonstrate having about the fundamentals of our laws and their underlying principles.

I'm saying that without that understanding, which are the qualities that make any person, great or not, fit for office, and the lack of which makes anyone, great or not, unfit for office, then unrestrained by those convictions, they are liable, with the very best of intentions, to bring great harm to this nation and/or to our state. and at this point I'm not sure how much more of that we can take. ..."

Take the time to know that a candidate is worthy of your vote, to a reasonable satisfaction, because, as we are all finding out, elections do have consequences.
Posted by Van Harvey at 11:39 PM No comments: