Last Sunday, I was minding my own business, reading and poking the boobs on Amazon's 'Liberal Fascism' threads (I've much to post on this book when I'm done, conveying in greater detail much of what I'd posted on a year or two back - Stormcrow is my moniker there, btw), when I suddenly began to feel nauseous, had a head rush, and more intense nausea. I left my bat cave (see my profile pic) and came upstairs where my wife the nurse checked my blood pressure & heart rate. I noted a little extra steadiness in her features, but she said the BP was fine.
I sat there at the table for a few minutes, and then thought that maybe I just needed lunch and put some leftover spaghetti & meatballs in the microwave. While waiting... wo... the world began going white... I said "I think I'm actually going to pass out..." and a moment later, I did.
I dimly heard Carol hollering for the boys to come and help, and then nothing. Two minutes later I woke up on the couch with some very concerned looking faces leaning over me and Carol on the phone to 911 getting the paramedics over.
They checked heart rate and BP again, took blood sugar, EKG, all fine... with the oddity that my heart rate was 48. Great if you're a tri-athelete... not so great if you're a computer geek. Figuring that if you're going to be worried anyway, you might as well have a bunch of data to be worried with, we took me to the hospital ER, where they hooked me up to a nifty bed with all the heart & BP gizmos whirring and pumping and beeping every few minutes, and my favorite, the alarm that sounded as soon as I began to calm down again and my heart rate fell below 50 ...
'Beeeeep! Beeeeeeeeeeep!
Very soothing.
'Why is that beeping?'
'Your heart rate is abnormally low''
'Ah. Thanks.'
It was a while before they figured out that when I heard that beep, I thought that that meant imminent death,
'No, not critical, just odd. We should give you a thorough check out.'
'Ah. Thanks.'
And so I got a nifty room up on the cardiac floor - coincidentally right where my wife works, and I spent the next two days taking every possibly relevant test to figure out what the heck was happening. I also got a roommate who liked nothing better than to watch every Jerry Springer’ish kind of show available on TV throughout the day and night with his wife (picture principal Rooney’s secretary in Ferris Bueller) there with him commenting on every interesting development.
Ah… rest and relaxation.
I've had EEG's, EKG's, mucho many needles inserted (2:00 a.m. seems to be the best time to do 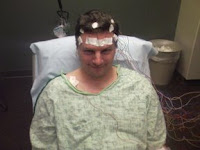 this) to do full blood workups, treadmill stress tests to let you experience utter exhaustion on differing inclined angles, with ultrasounds (cold goo pressed against your startled skin) of the heart before, during and after, Doppler’s of the carotids, CT scans of the head where they slid your head into a very angry sounding round machine that looks like the portal for Stargate SG-1, a tilt table test which tests your ability to withstand boredom while strapped to a flat board and tilted at various angles intermixed with nitro-glycerin spritz's and more automated blood pressure tests (this should be understood to mean 'squeeze REAL tight, get all blood out of your arm, all of it... ok, start letting it back in... rats, it's back). And of course after each test sizable chunks of arm and chest hair must be ripped out for maximum effect.
All of which can be summed up as 'yeah your heart rate is low, but seems to be normal for you, you respond just fine to all changes and exertions. We've got a cool term to describe your passing out, its called Vasovagal Syncope brought on by Idiopathic (it crossed my mind that maybe he was one of the Amazonites insulting me, but I don’t think so) causes, which of course means - 'we've no clue why you passed out, but we do recommend you don't do it anymore.'
Ok, I'm on board with that.
Reality did pop in before I left, just to make sure that I do keep my thoughts affixed to mortality; while I was waiting to get my final results, my roommate was rushed in a flurry from our room for emergency triple bypass heart surgery. His wife, remained behind for a few minutes to call their children and friends in heart rendingly tearful sobs, barely managing to give them the news "It looks bad, the Dr. said they'll do what they can... Oh My God...". I witnessed the instant transformation for me, of what moments before was a person of annoyance, almost a characiture of a person, into a real human being, a sympathetic person with intense cares and loves and desperate fears, whom I felt utterly helpless to assist or soothe as I watched and listened to her experience the destruction of their life and love... his wife... this time... could have been mine....
Reality. It’s all around you.
I’ll accept the Idiopathic diagnosis, but I’d be an idiot to think that THAT was the important thing for me to learn from my experience.
Posted by Van Harvey at 2:35 PM

I read somewhere that William F. Buckley has taken a low dose of ritalin for 40 years or so for a sluggish heart. I just googled it and found this letter written by WFB:

"I hope you will have a chance to mention that what the doc said, after I had fainted (first and last time) was that my blood pressure is so low that I should either take a quarter pound of chocolate in mid afternoon, or a Ritalin. But after 30 years, nobody has detected any change in me, haahaaaahaahahahhhaaaaaaa, eeeeeeee, oooooo-ooooooooo-oooooo! Now I'm feeling uiqte [sic] fine, as you can see."

Glad evrything's OK, Van. A trip to the hospital is just like a thrill ride, only without the thrill. And it's not much of a ride, either. BTW I don't know if you heard this, but Robert Jordan died this last fall, leaving the last book of Wheel of Time to be completed by someone else. (I thought I remember you saying that you'd been following the series, but if I'm wrong then chalk it up to the ritalin I didn't take.)

Petey said " I should either take a quarter pound of chocolate in mid afternoon, or a Ritalin. But after 30 years, nobody has detected any change in me, haahaaaahaahahahhhaaaaaaa, eeeeeeee, oooooo-ooooooooo-oooooo!"

Heh. Probably explains why I can (and do) drink a pot of coffee daily and never get trembly or anxious.

(BTW - to paraphrase Inigo Montoya "I no t'ink dat link, links to what you t'ink it links to")

I knew he was prepping his friend to complete it if he wasn't able can't think of his name at the moment, but a good writer...(Brandon Sanderson - not who I was thinking of)... but I didn't know he'd died... looks like mid Sept 2007. Damn.

I met him, very briefly, at a book signing in St. Louis - an interesting character, the man had some stories to tell....

I'm happy you're back with us Van!
Thanks for expressing so well the humor, the annoyances and the nearby tragedy in such a meaningfully human way.
It's a tough thing to go through when you're helpless in more ways than one.

Ideopathic is a word I know uiqet
well. :^)
"You see Ben, either the AIDS caused that, or the medication. We just don't know.
I'm pretty sure it's not another virus though."

"Uh...okay. Thanks Doc, I think."
Ideopathy does sound somewhat insulting, so my Doc often just says, "I don't know...for sure."
Which saves me from having to tell any Army jokes. :^)

You might wanna add some more joe to the menu, if the ritalin don't hack it.

Thanks again Van for an outstanding post! You're a natural storyteller! :^)

The things you had to go through for a story! Trying to keep up with Ben is only for the brave. Glad you're ok Van, and to find out you're an idiopath, well that sounds like a very useful superpower.

I am glad to are OK. Hang in there and try not to worry.

Finally I got time to put myself together and give a long due retort. I hope you are feeling better!
/Allotetraploid