I continue to be drawn back to the idea that the ends are contained, drawn out from, the nature of the beginnings. People grasp it in different ways, some say God’s plan, some trivialize it (to my mind) as random chance and blind evolution, but they miss its deeper implications. It is less a plan than an unfolding, following as it must from its nature, and headed towards a development equally formed from that, but far more elegant than by ‘plan’ – it is a harmonic freedom, no one thing can not be in tune with it, and yet all is guided from its own nature within. A beautiful choreography with no part determined, each freely pursuing what it must, and as it could not otherwise have been; and nothing determined; only beginning and unfolding towards an end that must be, naturally and freely.


I was listening to a talk tonight by David McCullough on “Journey Through Hallowed Ground”, and in the Q&A he began to become worked up about our failure in passing on our History as something of value and reverence - as who and what we are, and should be. In the course of that he draws attention to a statue, "the Car of History" in Statuary Hall, which is of the Goddess of History, Clio, standing in her chariot, observing the proceedings below, with the huge book of history open before her, and she is writing in it at that moment, what she is seeing. And positioned about where the chariots wheel would be, is a large hand crafted clock, still working, ticking away the present into the future, all of which rests upon a globe with the signs of the Zodiac carved upon it.


This sits in the hall of our Nation’s Capital, placed where our elected representatives pass beneath it, cannot miss seeing it. For those with eyes to see, for those charged with representing the people of the United States of America, who daily pass below it, it should gong that sense of Holy, of Time, of Awesome responsibility. A people who lose sight of their history, lose touch with the ability to feel, understand and respect the profoundness of their positions in life; in the course of life. Even looking on the most grave, they see nothing of it, think nothing of it.

From Thomas Jefferson to Jonathon Edwards in a fluttering of the eyelid of God. The bile and gorge rises in the throat. 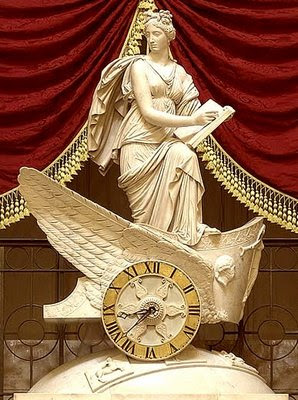 Though we may forget and discard notions and lessons of History, Clio writes on. From the present, into the past, for the future. It is all One.

McCullough noted in words to the effect of 'it is important to realize how utterly different they were from us, that it is a mistake to think of them as people just like us, they were formed from a different time, a different circumstance, a different mental world', he also made mention of Alexander Pope's line from his “Essay on Man” that was one of many of his on the lips and tongues and pens of the Founders generation "Act well your part, there all the honour lies"; and that they took that to heart, gravely, Washington was quite aware that he was playing a part in History, that he would be judged by how well he played it, and his fellows understood this as well.


…To whom can riches give repute or trust,
Content, or pleasure, but the good and just?
Judges and senates have been bought for gold,
Esteem and love were never to be sold.
Oh, fool! to think God hates the worthy mind,
The lover and the love of human kind,
Whose life is healthful, and whose conscience clear,
Because he wants a thousand pounds a year.
Honour and shame from no condition rise;
Act well your part, there all the honour lies….


They are not just words, and a far greater people who gave rise to us knew it and knew them to be True, that so many of us today know it not goes far towards explaining who we have become today. Not just words, not just dates, not just facts, not just names in dusty history books. But thinking so, threatens to make us... just people.
Posted by Van Harvey at 11:59 PM

Good one, Van.
It's all a matter of vocation: finding it, and carrying it out.
Some have a vocation for notoriety-worthy public figures, the great saints, sages, artists of all stripes.
The rest of us, not so much, but we're not off the hook due to obscurity.
Luke 17:10 would be my 'life verse', if Catholics had them...

"Act well your part, there all the honour lies"; and that they took that to heart, gravely, Washington was quite aware that he was playing a part in History, that he would be judged by how well he played it, and his fellows understood this as well.

Yes indeed! Our Founding Fathers were far better educated, both horizontally and vertically, within and without, than the vast majority of leaders we have today.
They realized what history is, and that they were making their part...acting their part, not as mere humans but as humans being.

Act well your part, there all the honour lies….

And, unlike far too many today, they understood honour. Honour, to them was a far more prized possession than power or money.

Do we have man and women of honour left in America today?

Aye! That we do. However, it is the responsibility of each and every citizen to recognize them and to choose them to lead our great nation.

Look not to the politicians that promise pork, but to the Statesmen that honour Eternal principles, Truth, Goodness and Beauty!

It must indeed have been a worthy post. I was inspired by the photo to listen to the lecture you referenced, and read the entire poem. So much food for thought in there. I have a project in mind for the grandchildren, something to flesh out the history of these United States. Sadly, I have horrible problems with discipline, and buckling down and doing the work. But this is inspirational. Thanks.

Dloye, glad you gave the links a look, there is worth there.

"I have a project in mind for the grandchildren, something to flesh out the history of these United States."

So do I, though it may be about the time I have grandchildren that I get around to completing it, there is much that can be done with the new laptop, tablet & UMPC (Bigger than a pocketpc phone, smaller than a tabletPC), that I think can put actual Education back into the hands of Real Teachers, Parents and Students.

Anyone got a few, maybe 6, months worth of time that I could borrow? Not you, just your Time... sort of a metaphysical account balance transfer?... nah, didn't think so... rats.

Van: You need to let me know when you write new stuff. So I can pop in and take something entirely out of context and then say something inflammatory about so we can flame war each other :) But anyway that is some good stuff there and it is going to take me awhile to process it all. But it looks very interesting as well.

Lance said "So I can pop in and take something entirely out of context and then say something inflammatory about so we can flame war each other :) "

This is great info to know.