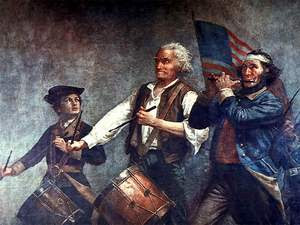 The Concord Hymn -Ralph Waldo Emerson (1837)
By the rude bridge that arched the flood,
Their flag to April's breeze unfurled;
Here once the embattled farmers stood;
And fired the shot heard round the world.

The foe long since in silence slept;
Alike the conqueror silent sleeps,
And Time the ruined bridge has swept
Down the dark stream that seaward creeps.

On this green bank, by this soft stream,
We place with joy a votive stone,
That memory may their deeds redeem,
When, like our sires, our sons are gone.

O Thou who made those heroes dare
To die, and leave their children free,
Bid Time and Nature gently spare
The shaft we raised to them and Thee.

Looks like Barrack H. Obama has been elected 44th President of the United States of America - I would emphasise the word elected. Clearly and uncontested. Agree with or disagree with it, wise or unwise, the American people have chosen a new President, and that is that.

As President, he is due the respect of the office, the support of the citizenry, and the best wishes of the people.

I will do my best to oppose, as far as I can see, all of his policies, but I will not sink, and I hope no one else I know will either, to the sickening, juvenile, destructive vitriol heaped upon the 43rd President of the United States of America, George W. Bush.

Lets work to clean house in the Republican Party, kick out the stinking rectum's of all the Rino and big Gov't types still standing, work to make it a party of Conservatives and Classical Liberals, and move America forward.

Best wishes and luck to President elect Obama, and the people of the United States of America!
BTW -Senator John McCain, though I disagree with most of his policies, he fought hard for what he believed in, a damn good effort - thank you for fighting for what you believed in.
Posted by Van Harvey at 9:58 PM

Well said, Van. You are far more gracious than I can be right now. But, here, I could not agree with you more. For the Love of God, let us not engage in B(arak) Derangement Syndrome.
But on the other hand, how can we let all that snark go to waste?

We'll think of something.

And I'd like to add, May God bless America. Still the greatest nation on God's green earth.

Well said Van, I know you are probably more then a little upset right now.

Also, we have a lot of up n' coming Republican Conservatives, Sarah Palin, Bobby Jindal, and more than a few Iraq and Afghanistan Vets. And who knows? Maybe Joe the plumber.

The horizon looks good, and it won't be easy gettin' from here to there, but I know we can get there.
We all know how bleak it looked during the 70's, right?

Republicans have done their share of Constitution-shredding, and perhaps this is payback.

OK, we'll give Obama a chance, but I reserve the right to mock his ears.

Yes indeedy, and Shays too! This is an opportunity to clean house, cut the dead wood, take out the trash... etc.

Lets do it, get our message back in line with our principles, and come out swinging with civility, style and a strong Right hook.