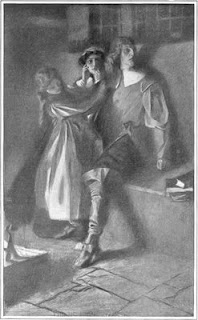 What's that sound? I've been hearing it for a while now, it was quite distant a couple months back, but it has been approaching and getting louder by the day.
Oh, yeah, that's right - it is Doom and the economy closing in.
My new project has been shelved, my current one is winding up, and I will be out of work as of Jan 1, 2009.
Happy New Year!
Still, could be worse... probably will get worse of course, but that's beside the point - even when it is worse, if you can think it, it could be worser still.
One of the books I'm reading at the moment is Amity Shales "The Forgotten Man"; Oh yeah... it could be worse! The other book I'm reading is Russell Kirks "Edmund Burke: A genius reconsidered"; Oh yeah, it could be a lot worse!
Come to think of it, I'm actually quite pleased to be able to lounge here in my robe, fretting over losing my position in three weeks; a fire in the fireplace, kids in their beds... it could all be gone tomorrow, but it's here now, and what has been cannot be lost, and what could be, can not be forgotten.

The Wanderer by W.H. Auden
Doom is dark and deeper
than any sea-dingle.
Upon what man it fall
In spring, day-wishing flowers appearing,
Avalanche sliding, white snow from rock-face,
That he should leave his house,
No cloud-soft hand can hold him, restraint by women;
But ever that man goes
Through place-keepers, through forest trees,
A stranger to strangers over undried sea,
Houses for fishes, suffocating water,
Or lonely on fell as chat,
By pot-holed becks
A bird stone-haunting, an unquiet bird.
There head falls forward, fatigued at evening,
And dreams of home,
Waving from window, spread of welcome,
Kissing of wife under single sheet;
But waking sees
Bird-flocks nameless to him, through doorway voices
Of new men making another love.
Save him from hostile capture,
From sudden tiger's leap at corner;
Protect his house,
His anxious house where days are counted
From thunderbolt protect,
From gradual ruin spreading like a stain;
Converting number from vague to certain,
Bring joy, bring day of his returning,
Lucky with day approaching, with leaning dawn.
(1930)

Shit happens. That's what Scotch is for. Get over it.

Yeeesh. Not great news. I suppose in the moments in between, when it doesn't feel like you're staring down the barrel of a shotgun, it can hold a modicum of hopeful speculation about new horizons and undiscovered opportunities.

You'll all be in my prayers.

Damn Van. I hope Mizz H has a recession-proof job. Cowboy keeps this proof in reserve.

I just know y'all will be fine.

Thanks guys. Just happens to be the way things go with contracting, even in good times, and the unavoidable price of freedom, is risk and insecurity - no sense complaining about it.

I geuss I could whine for some garaunteed security and stability, but that soulcharge is beyond my budget.

MizzH is now an R.N. which is pretty darn recession proof - probably not gov't-help proof - but hopefully that'll be awhile in coming down.

Either way, I'm sure I'll turn something else up soon.

In the meantime I'm dreaming of Lagavulin Scotch, but the price would rush me quite a bit closer to the poor house, assuming MizzH didn't put me beyond medical help first... so I guess Glenlivet will have to do.

Quote: This was worth a glass of 18 year single-malt.

Worst case, the Apocalypse will need good documentarians. You've got a hot pen, I've got a trusty camera. We'll be beggin' for a day off.

Just gotta figure out that little 'getting paid for it' problem.

Hang in there Van. Somethin' will turn up. The hard part is waitin'.