Memorial Day, for those who said "If I don’t do it, then who will?"

"The Commission administers, operates, and maintains 24 permanent American burial grounds on foreign soil. Presently there are 124,909 U.S. war dead interred at these cemeteries, 30,921 of World War I, 93,238 of World War II and 750 of the Mexican War. Additionally 6,177 American veterans and others are interred in the Mexico City and Corozal American Cemeteries. We sort of live by the motto of our first chairman, Gen. John J. Pershing, who said, 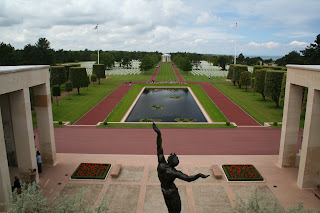 'Time will not dim the glory of their deeds'" 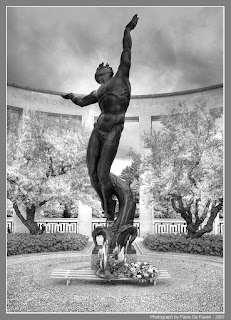 Neither will time diminish our debt to them, rather, it magnifies that debt with each passing day we are able to enjoy the freedoms they fought for.

And this photo brings home the true meaning of what they did, and amid all that they've given us, reminds us of what their loss truly means..., 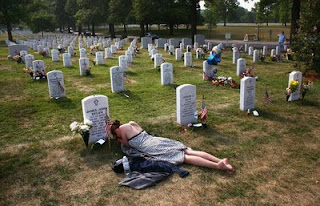 Mary McHugh, lying on the grave of her fiance, Army Sgt. James John Regan, at Arlington National Cemetery. He was a star lacrosse player in college, and Instead of taking a scholarship to law school or a financial services job, Regan followed a calling to the military, where he became an Army Ranger and served two tours of duty in Afghanistan and two in Iraq...

"He said, 'If I don't do it, then who will do it?'" said Regan's fiancee, Mary McHugh, a medical student at Emory University who, like scores of others at the Park Avenue house yesterday, wore Regan's high school graduation photo clipped to her shirt. "He recognized it as an option and he couldn't not do it."

For Memorial Day, I'll let others do the rest of the, sobering, talking. Beginning with a few comments by presidents who not only knew how to be Presidential, but who understood what this day memorializes. A few words from George Washington, starting with his "Prayer for the Nation" written at Newburg, June 8, 1783, and sent to the governors of all the states,

Almighty God, we make our earnest prayer that Thou wilt keep the United States in Thy Holy protection: that Thou wilt incline the hearts of the citizens to cultivate a spirit of subordination and obedience to government and entertain a brotherly affection and love for one another and for their fellow citizens of the United States at large. And finally, that Thou wilt most graciously be pleased to dispose us all to do justice, to love mercy, and to demean ourselves with that charity, humility, and pacific temper of mind which were the characteristics of the Divine Author of our blessed religion, without a humble imitation of whose example in these things we can never hope to be a happy nation. Grant our supplication, we beseech Thee, through Jesus Christ our Lord.
Amen.

... and, at the request of that Congress which had passed the Bill of Rights, proclaimed a day of "Public prayer, to be observed by acknowledging with grateful hearts the many and single favors of Almighty God".

Keeping in mind that while I'm not technically religious, I recognize that what Washington and the other Founders were speaking about, aiming towards, was what I do think and feel to be very, very real, and criticaly important to our lives and our nation... and I can tell you it has very little to do with 'talking snake stories'. Washington also noted,

"It is rightly impossible to govern the world without God and the Bible."
Was he speaking of the printed words, or their meaning? And with so few, if any, able to distinguish between the two, is there any wisdom in trying?

What did he mean when he said,

"No people can be bound to acknowledge and adore the invisible hand which conducts the invisible affairs of men more than the people of the United States. Every step by which they have advanced to the character of an independent nation seems to have been distinguished by some token of providential agency.... We ought to be no less persuaded that the propitious smiles of heaven cannot be expected on a nation that disregards the eternal rules of order and right, which heaven itself has ordained."

The full measure of his meaning was taken and given by those we honor on this, and every, Memorial Day... spend some time giving thought to what their words and deeds meant and continue to mean.

It is perhaps not improper to close out with Lincoln's Gettysburg Address:

"Four score and seven years ago our fathers brought forth on this continent a new nation, conceived in Liberty, and dedicated to the proposition that all men are created equal.
Now we are engaged in a great civil war, testing whether that nation, or any nation, so conceived and so dedicated, can long endure. We are met on a great battle-field of that war. We have come to dedicate a portion of that field, as a final resting place for those who here gave their lives that that nation might live. It is altogether fitting and proper that we should do this.

But, in a larger sense, we can not dedicate... we can not consecrate... we can not hallow this ground. The brave men, living and dead, who struggled here, have consecrated it, far above our poor power to add or detract. The world will little note, nor long remember what we say here, but it can never forget what they did here. It is for us the living, rather, to be dedicated here to the unfinished work which they who fought here have thus far so nobly advanced. It is rather for us to be here dedicated to the great task remaining before us—that from these honored dead we take increased devotion to that cause for which they gave the last full measure of devotion—that we here highly resolve that these dead shall not have died in vain—that this nation, under God, shall have a new birth of freedom—and that government : of the people, by the people, for the people, shall not perish from the earth."

Thanks, Van for an outstanding tribute to our veterans who gave there all to protect our life, liberty and pursuit of happiness (property) as well as their fellow veterans.

I was moved to tears by the photo of Mary McHugh. The families of veterans also ake great sacrifices, especially of those who lost their lives.
The grief they bear cannot be fully explained by words alone.

Those quotes by George Washington, General and President are powerful, Van!
Is it inconceivable we will ever hear an American President speak words to that effect? God, I hope not.
And how lecherous is our MSM to ridicule any mention of God by our President? President Bush being the last one.
I don't think I exaggerate that during the times of President Washington or Lincoln, these parasites would've been publicly tarred and feathered and ran outta town.

I wanna say thank you Van, and I thank all the patriots like you who have our six.
I don't think I'm bein' presumptuous in sayin' all our men and women in uniform greatly appreciate what you patriots have done and still do for us.

I was heartened when letters, calls and e-mails flooded Congress when Obama cravenly suggested that veterans pay for more of their own healthcare. Oh, he blamed it on a stooge but I'm not fooled by that game.
And of course, most of those Congress critters, fearing for their jobs and knowing public sentiment was in support of our veterans didn't dare back that foolish idea.
It was patriots like you who "convinced" them this was a foolish idea.
However, I do praise the Congressmen who have always went to bat for our veterans and there families.

You know, I've spoken with French and Italian sailors in the Phillipines and they say they envy the American military because most Americans truly do support us.
I felt bad for them, because so few of their countrymen want them around...unless there's trouble.
I couldn't imagine the pain they feel, like the pain our Vietnam vets felt. Good God! May that never happen again here.

This Memorial Day I will raise a glass in the honor of our veterans, past and present, salute them and say a prayer.

God bless our veterans, there families and patriots everywhere who get it: who hold these truth's to be self evident, and cherish life, liberty and the pursuit of happiness.

A wonderful tribute! Thanks.

God bless everyone of them.