nObama Healthcare plan - what's so confusing about it?

People think nobama care is confusing... Au contraire, I think it is very self explanatory. But first a quick review.

We started off with a 'healthcare system' that consisted of

This was soon followed by the system we have currently, that has been jiggered around by various helpful Govt initiatives to consist at this point of,

Now, nObama is proposing a remarkable solution to that 'problem', and in a show of bi-partisanship, the GOP has even provided a handy-dandy picture of it, which is useful, a picture being worth a thousand words and all... and thousands of words are needed to describe this thing, here it is: 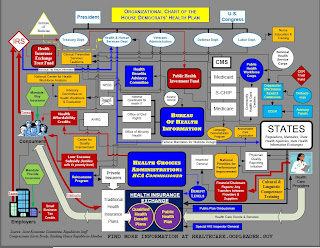 (Blogger's being a pain, won't let me update the pic, full size image here - thanks Alan)

, whereby they propose that,

Insane... sure... but self explanatory.

Ok, this much I get,
1 - People want more access to medical care, with the same or better quality of care, at a lower cost or even at no cost.

I Got it. Understandable.

It's the second part that I don't get.
2- They want, and expect, the government to be able to accomplish that for them, by replacing the 'private' insurance fiasco they've already mandated for us, with one entirely designed and run by... the Govt?

Has anyone in this entire nation ever repeated those two sentences to themselves, back to back? And still said "Yeah, sounds good to me"?

Baffling, horrifying, and amazing, all at the same time.

And something which The Gunslinger clarified, our true Rights involve being left free to do or say something ourselves, they don't presume a Right TO something of someone else's.

Didn't we fight a Civil War that revolved around such an issue?
Posted by Van Harvey at 8:02 AM

Nail on the head... until socialism is generally understood to be slavery, as it is, this battle will not be won.

Here's a thought starter - those who receive more cash from the government than they provide through taxes are in a situation where they are in a conflict of interest and cannot vote.

Van,
There are a few things I want you to factor into this equation. I work at a county hospital and provide medical care to adults. I see people who get off the plane and come to this hospital for a heart catherization and then immediately return to their home countries. I see people show up every 6 months, get medication refills and return to their life on the islands. These are uninsured patients who will never pay their bills because how would you collect your bill in Bangladesh? In comparrison to the typical Medicaid patient, they are pleasant. They do as instructed, get what they can for free, and don't cause problems. Since it is a county hospital, no one is refused care and everyone is cared for to the best of our abilities. Now the Medicaid patients are "entitled" to stay in the hospital despite being well enough to go home, and they constantly complain about not being fed well or some nurse looking at them the wrong way. They usually lose their prescribed medication, and need a new bottle of tylenol every month even though they can buy it over the counter. They are incredibly wasteful and if they had to pay for a minimal portion of their medical care, they would be far more frugal and agreeable. I don't think that they can pull this crap at a barber and ever hope to return to that shop, but in the hospital they demand, threaten, and cause a great deal of headaches for everyone involved. These folks feel entitled to a great many things and they have far more rights than you have ever dreamed of. Consequences and responsibility are not part of their dictionary.

BTW, can you post a high res image of that plan?

Yep, my wife is a nurse at a major hospital and runs into the same... her Mom was a labor and delivery nurse at a county hospital in Las Vegas and often found herself bubbling over with venom at the abuses thrown not only at the system, but the assumption that she was their slave to be commanded.

Disgusting. Not only the policy, but how it corrodes the spirit of not only those it 'helps', but those it assumes to compel to help them.

Thanks for the link Alan, blogger isn't letting me update the image, but I put a link to it under the post's pic.

BTW, did you know that the Dem's are trying to suppress the circulation of it?

We (a couple of concerned Americans) have set-up a website where you can download a "NObama Healthacare" icon to place on BLOGS and websites. Our goal is to show a unified stand against the health bill across the internet. You can check it out at www.NObamaHealthcare.org.

Keep up the great work!