Thought I'd share this with you all out there in Blogger land. I let one of my Senators, Claire McCaskill, know that I was extremely concerned about the healthcontrol bill which she and her congressional buddies are working on imposing upon us, our kids and our grand children. In part, I wrote:


"... I've not been politically active prior to this year, but that has been steadily changing. On my own dime, I made phone calls into New York for the NY23 election. I spent my 49th birthday on Nov. 28th helping to set up the Tea Party in Kiener Plaza. If this healthcare bill passes with your vote, I will be physically knocking on doors and working to unseat yourself and every other politician in 2010 & 2012, who supported it.

Even beyond my general political opposition to govt involvement in healthcare, this bill, it's deals, pay off's and shafting of most states to benefit a few, is just revolting.

I hope you'll see your way out of this thing."


I just received a reply from Senator McCaskill, she says:

"Thank you for contacting me regarding health care reform. I welcome the opportunity to update you about what is contained in the Senate health care bill and clear up some wide-spread misinformation.... "


Excellent. Alrighty then, update me.


"According to independent analyses of the bill, including the non-partisan Congressional Budget Office, the recently-passed Senate health care reform legislation will reduce the deficit, protect Medicare, and stabilize healthcare costs for over 90% of Americans...."


Well... I suppose that does have something to do with putting something 'up' me... but I'm not feeling all right about it. Why? Well, lets see a couple reason,

1 - The House Bill alone, HR3962, is going to establish at least 111 new boards, committees, govt programs, and various bureaucratic impositions, encumbrances and general hoops to be jumped through by those who will actually be involved providing, receiving or enabling your health and mine to be cared for.

2 - I, with the small bit of knowledge I have about the operations of govt, I know that with ANY new board, committee, program or red tape busy work, I think that I can make a reasonable guess that each one of those programs, nationwide programs mind you, is going to cost oodles of money, each in their own right for personnel and their supplies alone.

3 - Each of these new boards, committees, govt programs, and various bureaucratic impositions, encumbrances and general hoops to be jumped through are going to require quantifiable amounts of time and effort from those involved in actual healthcare, reducing the time they can devote to myself and other patients, reducing the amount of time available for them to be actually productive and profitable to themselves or their employers - Translation for the Senatorially impaired: this reduces the services that can be provided to myself and other patients, while raising the costs of them - that will not save anybody any money!

4. From this alone, I find it very difficult to believe that this bill is going to reduce ANY costs - you see,


That totals up to a financial drain, a reduction of available services, and people who are less aware and involved in providing those services that good Health Care requires!

"... This reform is necessary because the soaring cost of medical care is crippling our economy, bankrupting our nation's families, and becoming an unsustainable financial burden for American employers. In the last eight years, health care premiums have grown four times faster than wages, and insurance companies have made millions of dollars in profits while routinely denying coverage. " 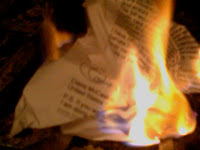 Here, you read the rest of her letter.

You can find an excellent analysis of the HR3962 bill, and a list of the 111 new programs, by Duke Univ. Professor John David Lewis here, and it is far, far, far worse than the trifling points I've mentioned above.

Senator McCaskill, I have a message for you and your congressional buddies, on the Left and Right, and it will most definitely result in cost savings for myself and all Americans, here it is:

And I'm not waiting for voting day to begin work against you, that's already begun... in Massachusetts... for Sen. Scott Brown. God, I love the Internet.

P.S. - Oh, and then of course there is one, teensie weensie additional detail to be considered here... before anything else need be considered... and that is that the govt has no right, whatsoever, to mandate that I enroll in health care at all, let alone in a form devised by the govt!


Where in the blazes does the Constitution of the United States of America give the Federal Govt the power to determine the content, form and procedures which private businesses will offer?!

This "up" thing- did it involve smoke and, say, your tushy (as we say around here)?
You were the wrong person to send that little mass-produced missive to...

Harry Reid was coming to Irving, but he bailed- the big chicken.

It would be a momentous win in Massachusetts. The hangover--which is permenant--will be that he is a 'moderate', and the conservative brand cannot survive and move forward carrying those people. Not that I would hesitate to punch his ticket on this one peculiar election.
He is the kind of person Democrats were fory years ago, but we see where that leads.

Yes, I was far from overjoyed when I first looked into his record... my impression was that that video which fades a speech from JFK into Scott Brown, was probably more accurate than anything else.

Like you said, 'Not that I would hesitate to punch his ticket on this one peculiar election.'

In this case, and keeping in mind that we're talking about Massachusetts... it's a no brainer all around - message to our cousins in Massachusetts - vote for Brown, and we'll deal with each other's hangover's together!

Yeah, Reid's a shifty chicken, and from the polls outta Nevada show... he's got good reason!

I hope people back home are keeping a close eye on whose eggs he's keeping warm now, but I'm betting they aren't being laid in Nevada.