Too late to put coherent thoughts together... still recovering form our oldest son, Ryan, leaving for bootcamp yesterday, but today was filled with two protests against Obamao Healthcontrol bills.

The first was in the morning at the St. Charles convention center, with an onsite panel including Lt. Gov. Peter Kinder, State Senator Jane Cunningham, and State Rep. Cynthia Davis, joined by satellite by U.S. Rep. Todd Akin and Mike Pence. 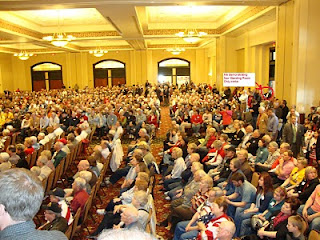 Akin identified Obamaocare as "By far the worst bill I have ever seen" and a threat to our health care, our economy and our Rights and Liberties, and drew rousing cheers and standing ovations with calls for the crowd to help in the effort to stop this monstrosity. Sen. Cunningham and Rep. Davis also made standing ovation comments about our best first line of defense against this thing, the proposed Missouri's Health Care Freedom amendment to Missouri's constitution.
The Townhall, called by Akin, was made all the better by a standing room only turnout of 2,225 people in attendance, and that didn't count numerous others, such as myself, who weren't able to register as they ran out of cards.

In the evening, we had a second helping of Tea Party Protesting, greeting President Obamao in downtown St. Louis. The whole St. Louis Tea Party gang was present, Bill Hennessy, Dana Loesch, Jim Hoft of Gateway Pundit, John Loudon & Gina Loudon, Sharp Elbows, Jon Burns, Jay Stewart and all the rest of us rescued the excellent weather from being wasted on nothing more than Obamao and McCaskill fundraising efforts, see their links for more pictures and stories.

We had a nice round of dueling protests corners (vid of our singing skills to follow), 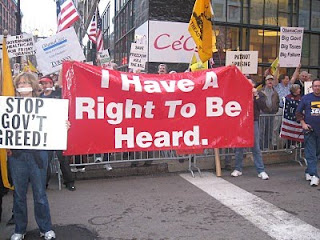 Jon Burns, on the left side, and myself on the right of the banner, get behind supporting our message. 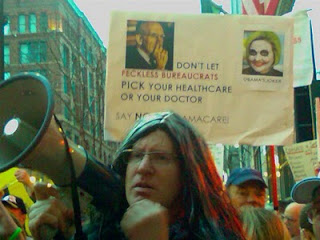 Jim Hoft of Gateway Pundit tries out a new hair do. 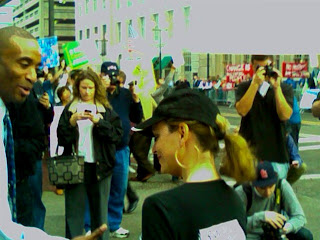 Gina Loudon speaks with the Press. 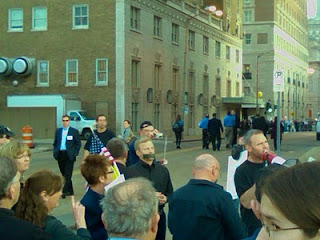 Bill Hennessey prepares the troops during the pre-game event. 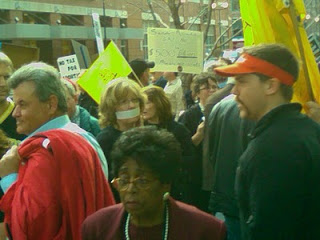 Aw, honey. Prayers for you all re: this big change. Please thank him for his service.

Hey Van, which branch is he going in to? I have several family members and friends who are the different branches. My thoughts are with you and your family at this time.

Nice post! And your mission statement at the top is so powerful, I am going to credit you and use it as my status today. THANK YOU for standing with us!

Thank you Sal, and thanks Lance. He's going into the Air Force, and even after seeing the catastrophic mess me made of his room before leaving... I wish he was here for me to order him to clean his room!

Guess he's getting his fill of taking orders now though.

Thanks Gina, it's my honor.