U.S. Asst. Secretary of State, Michael Posner says that in talks with the Communist Chinese, he brought our 'situation' in Arizona up early and often, 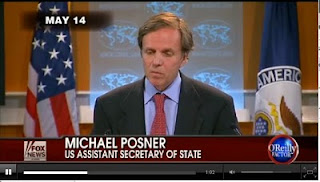 this is better read as Gateway Pundit puts it, as stating that he "...apologized early and often to the Communist Chinese regime for Arizona’s ID check law during last week’s talks...." - hey, no surprise, it's an Obamao administration tradition.

Are you surprised? Really? If so, slap yourself for it, and begin getting yourself informed. Really. Sorry, I've little sympathy for you here in 2010, open your eyes.

I mean... really... if you think America is being run by Americans, in either the Gov't, the Press or Wackademia, keep in mind that the House Majority Leader Pelosi, the House Whip Steny Hoyer, the Senate Majority Leader Reid, and NUMEROUS other prominent politicians, have in one form or another chuckled at the thought of actually reading the bills they are voting on wittily summing it us with something like "I wouldn't have time for anything else if I did that!"... several, Pelosi & Hoyer for instance, actually laughed at the thought... well with that in mind, here's what James Madison had to say about bills that are too big to read in Federalist #62..


"...The internal effects of a mutable policy are still more calamitous. It poisons the blessing of liberty itself. It will be of little avail to the people, that the laws are made by men of their own choice, if the laws be so voluminous that they cannot be read, or so incoherent that they cannot be understood; if they be repealed or revised before they are promulgated, or undergo such incessant changes that no man, who knows what the law is to-day, can guess what it will be to-morrow. Law is defined to be a rule of action; but how can that be a rule, which is little known, and less fixed?...

Or how about the Attorney General of the United States of America (among others... like... the President... the Homeland Security Director... etc), denouncing a law duly passed by one of the states... which he hasn't read? Isn't that sorta like profiling?

Where from does your surprise spring from?

But.. first... keeping with the theme, I'll go ahead and apologize too... for being blog-gone for so long and coming back with this as a greeting, but seriously, come on, this was just the latest in a string of slaps that should have roused you long ago (and yes... there's more below).

For now though, I'll just apologize for being AWOL for awhile... our household's been jostled between boot camp and Air Force and a new job (finally)... and really... my head has just been shaking from the headlines... the concrete stupidit of it all... isn't it enough to make you say WTF? Hold that thought through November of 2010 and 2012.

Aside from everything, I've been rereading my Aristotle... slow going, but good stuff, and one of the very few antidotes to what ails us in the world today, which I'll be blogging on soon (and applying it here as well). But while I don't have more than a minute this morning, I just couldn't let this latest one-two punch pass. I'm sure most of you have heard the latest idiocy form the Obamao administration regarding the Arizona immigration law (which apparently none of the Obamao's have read, but feel competent to comment on anyway), but still, that's not all... no no no... read on.

As I was receiving some good news from Gretchen Logue regarding the Race For The Top program getting another setback in Missouri (Franklin County just shot it down and even the MO's NEA is against it), when I saw this bit of insanity - which should make Michael Posner's position a little bit more understandable for you,

"...the Chinese education ministry has been extending its tentacles worldwide, from the 550 higher-ed programs (“Confucius Institutes”) already operating in 90 countries (including almost 70 on American shores) to the newer but no less worrisome K–12 language programs that are taking the U.S. by storm. One of Beijing’s chief U.S. partners in this venture, the Asia Society, has already opened 20 pilot sites in American public schools and seeks to launch 80 more by fall 2011. Some districts and states — notably North Carolina — are working directly with the Chinese government, while still more districts are turning to their local-university-based Confucius Institutes to get started..."

The communist Chinese are teaching Americans in American Schools... maybe this makes the actions and words of the boob job Posner apologizing to the Chinese, a tad more understandable? After all, he's just the type who would have attended such classes and would likely send his own children to them.

"...The basic offer is surely tempting, and doubly so in a down economy: At little or no cost to you, the government of China will teach your students Chinese language and culture. Chinese nationals handle instruction (almost 5,000 of them currently roam the globe, secondary and higher education combined); their government subsidizes their salaries and pays their airfare. China provides a free curriculum, textbooks, and materials...."

... the Communist Chinese Govt, teaching Americans. Of Course Posner apologized to them. After all, they're only responsible not only for something like 90 million deaths of their own people just a few decades ago, and continuing brutal oppression of any dissent of their people... slave labor, not to mention a policy of killing or deporting illegal immigrants from places like North Korea back to them for certain execution, this administration is equating and apologizing for, Arizona's legally enacted laws against illegal immigrants... to the beasts of Communist China... I mean... it's not like they support 'freedom' or 'profit' anything really disgusting and offensive of that sort, so seriously, what's the big deal, right?

I'd like to say that I'm surprised by both Under Secretary of State Michael Posner and the fact that a communist Chinese program to 'teach' American students ... and you can be sure it involves officially or unofficially lessons in how to be 'ethical'... but I've been investigating the history and philosophy of the left for far too long - it. just. doesn't. surprise. me. one. bit.

If you really are surprised... please... slap yourself again, and start looking into the matter!

This article isn't a bad place to start, John Taylor Gatto's "Some Lessons from the Underground History of American Education", he gets a bit libertarianish, a bit too free and easy with the shallow blame 'corporations for all our ills' type stuff, but the educational info is spot on.  I came across Gatto's article this weekend while cross checking some references regarding a proregressive fellow named Ellwood P. Cubberley who'd written a history of Education in the early 1900's, and was pleasantly surprised to see Gatto (and Cubberley!) taking note of many of the milestones I've bee harping on for ages, like the Morrill Act, etc. And incidentally - if you ever want to hear proregressives say what they really think, you can either wait for an idiotic slip-up like Posner's, or you can just look at what they said flat out and in the open, in the years before Hitler made all their pet ideas look so bad.

Seriously. The Proregressive left is that bad... well, I suppose they don't want to gas you... but they do want to do away with your rights and liberties, and once that's done, the only thing that would prevent such a thing, is their inclinations against such nasty business. Does that really make you feel comfortable?

Again if you are surprised either by Posner's apologetic comments to one of the worst mass murdering regimes in all of history, or by the fact that the Communist Chinese are being welcomed in to teaching American students, and in some cases in American schools... please... for me...slap yourself, and begin looking into the matter.

That or prepare your own apology to your grand children on how and why you let America dissappear from the face of the earth.
Posted by Van Harvey at 8:59 AM