The First Monday in October 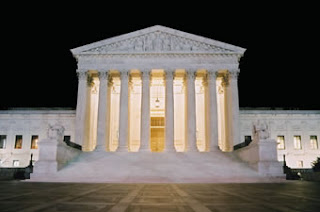 These Nine Justices, are the ones who hear and rule upon how laws will affect your liberty and freedom.

One of them, Sonia Sotormayor infamously said,

And as I said before:


"The problem with Sonia Sotormayor’s “Latina” comment isn’t that it’s racial, but that in seeing reasoning human beings, as defined by their genes, excludes character and reasoning, to say nothing of Constitutional reasoning (which IS her and their point) from the matter altogether." 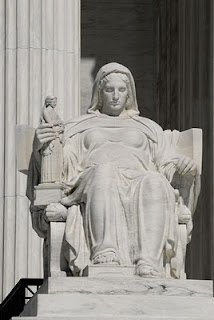 Another Justice, Elena Kagan, wrote an academic paper advocating for policies to redistribute Free Speech. And advocated before the Supreme Court which she now sits upon, that, it would be a swell idea to give a regulatory agency power over the 1st Amendment (which she is now charged with defending), trusting that... it's highly unlikely... that they'd ever actually limit anyone's Right to Freedom of Speech (but just in case... it was needed, they should have power over it).

I don't have the stomach tonight to go through the worst Justice on the court , Stephen Breyer (or at least he was until the two latest came along - he may be eclipsed by them - I've posted on him several times before, he's simply awful), or the others on the left or 'center' of the court.

I'll just say Thank God for these guys - Justice Thomas and also Justice Alito and Justice Roberts... and I suppose Justice Scalia as well - they are all (note: Four is less than Nine, and Four is less than Five also) that's standing between your liberties being defended by a written constitution, and their defense being cast as a 'living document' able to mean whatever those who want to find a particular meaning in it - like Kagan, Sotomayer & Breyer - which happens to fit what they'd like it to mean.

Am I fear mongering? Damn right I am.

Here's the Article of the Constitution which defines the Supreme Court, click the links, learn the meaning behind them - you're gonna need it.


Section 1. The judicial Power of the United States, shall be vested in one supreme Court, and in such inferior Courts as the Congress may from time to time ordain and establish. The Judges, both of the supreme and inferior Courts, shall hold their Offices during good Behaviour, and shall, at stated Times, receive for their Services, a Compensation, which shall not be diminished during their Continuance in Office.
Section 2. The judicial Power shall extend to all Cases, in Law and Equity, arising under this Constitution, the Laws of the United States, and Treaties made, or which shall be made, under their Authority;--to all Cases affecting Ambassadors, other public Ministers and Consuls;--to all Cases of admiralty and maritime Jurisdiction;--to Controversies to which the United States shall be a Party;--to Controversies between two or more States;--between a State and Citizens of another State;--between Citizens of different States,--between Citizens of the same State claiming Lands under Grants of different States, and between a State, or the Citizens thereof, and foreign States, Citizens or Subjects.
In all Cases affecting Ambassadors, other public Ministers and Consuls, and those in which a State shall be Party, the supreme Court shall have original Jurisdiction. In all the other Cases before mentioned, the supreme Court shall have appellate Jurisdiction, both as to Law and Fact, with such Exceptions, and under such Regulations as the Congress shall make.
The Trial of all Crimes, except in Cases of Impeachment, shall be by Jury; and such Trial shall be held in the State where the said Crimes shall have been committed; but when not committed within any State, the Trial shall be at such Place or Places as the Congress may by Law have directed.
Section 3. Treason against the United States, shall consist only in levying War against them, or in adhering to their Enemies, giving them Aid and Comfort. No Person shall be convicted of Treason unless on the Testimony of two Witnesses to the same overt Act, or on Confession in open Court.
The Congress shall have Power to declare the Punishment of Treason, but no Attainder of Treason shall work Corruption of Blood, or Forfeiture except during the Life of the Person attainted.

The Supreme Court is one of the reasons that when it's time for the general election, I will vote for the lesser of two evils.

We wouldn't be any better off economically, and not much better off legislatively with McCain, but we would not have these two clowns sitting on the Court for the next thirty years. I'm praying for the good health of all seven remaining justices. I hope they can all hang on until we have a President less likely than Obama to wipe his or her butt with the Constitution. For all Bush's bad points, the Roberts and Alito appointments -- we'll forget that little Harriet Meiers thing -- remain a noble legacy.