The Pied Piper comes to collect your children-lab rats

On the heels of my last post on the issue of Education taking a back seat to pushing a political agenda, the article which this post from the Missouri Education Watchdog links to asks “When is the line crossed between better health and surveillance?”, and it asks it regarding this: 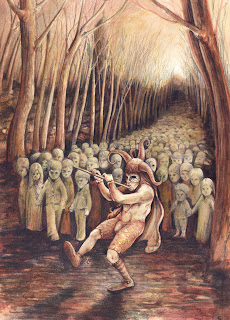 “In early 2012, wristwatch-like devices called Polar active monitors will be used by older students in PE classes at all 18 Parkway elementary schools… focus of the monitors' use will change gradually, so that by the end of the year students will continually wear the monitors for a full week at a time [24/7] to assess activity levels.
"We want to be able to look at both physical activity and sleep patterns," Ramspott said. "We also want to see how various activity levels correlate to student achievement and behavior."
They want to monitor, track, record, the activity levels of your children, examine their sleep patterns, they want to have your children way an electronic monitoring device not just at school, but at home, at play... around the clock.

These are elementary schools. They are supposedly for Educating your children... ok, not even I believe that... but they are at least supposed to teach your child to read, write, calculate and have some semblance of a scientific and historical perspective. They are not research labs for testing the performance quality of human resource units - your children, my children, are not being sent to school to function as lab rats so that government 'education professionals' can tweak their performance.

I’m sorry, but if you can’t see that this doesn’t even deserve the question of when a line might be crossed, and instead leaps directly to inquisition mode with

“Who the hell conceived of this and why do they still have a job around our children?!”

, then… I find it very difficult to see how the name ‘American’ applies to you in any way other than as a geographical reference. If you don't think that this, and worse, so very much worse, is coming to a school near you - soon... you are insane. That much ignorance of the progression of proregressive education is not excusable by ignorance or negligence, you are insane, and perhaps criminally so.

I don’t know how to string together enough four letter words to adequately express my outrage on this properly, so I won’t bother trying, but as Sam Adams said

"... May your chains sit lightly upon you, and may posterity forget that you were our countrymen!"

“Nobody can force kids to wear these things at home…”

You can look at this and seriously identify that as the key issue? Good lord, I hope I don’t know you.

What part of Reading, R’iting and ‘Rithmatic do you see monitoring a child’s activity levels and sleep patterns as falling under? Do you not grasp what assumptions this makes about not only the role of the School System, but its role in your life? Have you been so assiduous about not ‘over-reacting’, that you are willing to entertain any invasion of your life, any assumption of your child as a resource unit, as long as it isn’t ‘forced’ upon you?

Do you completely lack sufficient warmth of imagination to see what will follow once this is accepted as being the rational norm? Here, let me help you, this is from the article,

“… a pilot project started in April provided the monitors during physical education classes to students at Henry and Ross elementary schools. Shenandoah Valley Elementary School in Chesterfield joined the pilot in August.
At the district's Dec. 7 Board of Education meeting, the board approved expanding the project beyond the pilot phase.”


It began as providing monitors during phys ed classes, and is now expanding the project beyond the pilot phase… what do you suppose the ultimate purpose of the program is? This is every bit as much of a ‘pilot phase’ as wearing the monitors in phys ed class was, are you not able to see that?


“… but over-reacting isn't a rational way to deal with anything. “

How anyone can see this even being proposed, and not react with seething rational fury is beyond me. Personally, I’d be hard pressed to call anyone’s response to this, an over-reaction, and not reacting is just plain sick.


The proprietor of of "The 3Rs of Education: Respect, Reality, Reason" recently supplied this from Thorndike’s definition of the art of teaching, from his The Principles of Teaching based on Psychology (1906), that it,

"Stimulus and Response Using psychological terms the art of teaching may be defined as the art of giving and withholding stimuli with the result of producing or preventing certain responses In this definition the term stimulus is used widely for any event which influences a person for a word spoken to him a look a sentence which he reads the air he breathes etc etc The term response is used for any reaction made by him a new thought a feeling of interest a bodily act any mental or bodily condition resulting from the stimulus The aim of the teacher is to produce desirable and prevent undesirable changes in human beings by producing and preventing certain responses The means at the disposal of the teacher are the stimuli which can be brought to bear upon the pupil the teacher's words gestures and appearance the condition and appliances of the school room the books to be used and objects to be seen and so on through a long list of the things and events which the teacher can control The responses of the pupil are all the infinite variety of thoughts and feelings and bodily movements occurring in all their possible connections."

If that is accepted as the definition of Teaching, and it is in all of the Teaching Colleges which certify  Teachers, you can be assured that what it is that is being taught is not compatible with Liberty... but it goes fabulously well with 24/7 electronic monitoring.
Posted by Van Harvey at 8:05 PM

Wow. That is just insane. And what will the state do if your child is considered insufficiently or excessively active? Among other things - I'm sure location tracking will be a necessary part of the activity tracking function.

So many things wrong with this, it's hard to know where to start.

Scary people. Is it time to fight or time to hide?

That is incredibly intrusive. It's none of their F'n business how active your child is.

I think what is most troubling is that it teaches the children that this sort of monitoring by the government is OK to do.

Homeschool your kids. We homeschooled our girls and, well, actually, they sort of have trouble obeying authority. But that's a feature not a bug!

Creepy. And just last night caught this nearly as creepy TV commercial for this device you can put in your car from Progressive Insurance. It monitors your driving. You get a discount if your a good little pooch, I mean, driver. It's the people in the commercial that are the creepiest. They just love the thing. Like pod people or something.
How can there be so many people willing to do the monitoring?
My son was convinced it was some kind of joke commercial.

Sadly, it seems like folks are more and more willing to be participants in this especially if there is an alleged benefit. As Rick said, we are like dogs performing tricks for Scooby snacks.

@Anonymous, friend, there is no place to hide.

Rick - oh dear lord, I hope my insurance company doesn't latch onto that little scheme. I tend to mosey from place to place, but often at a rather high rate of speed, if you catch my drift.

Rick, check out the update at the bottom of the post, Stimulus Response, is the core of modern teaching.

It's also the core of governing, legislating and particularly advertising... because... it is the core of modern philosophy, going back to Rousseau who packaged it ever so attractively.

And Liberty has no place at all within it.

Yes, another good reason I homeschool my kids. That and I want them to have a real education, not the nonsense currently being spewed.