The foolish injustice of calling for "Justice for Trayvon!", after justice has already been served.

I rarely follow criminal trials, because, it seems I know something that most other people seem not to know: I wasn't there.

If you've been lucky enough to miss out on the relevant details of the matter, or sadly unable to understand them, let's recap, shall we?
Now if that system is being abused, ignored or maliciously altered, then that's something I might be likely to take an interest in it and I might be able to have some additional knowledge of, and an opinion, to offer on it, but to the best of my knowledge there has been no such evidence brought forward (and no, not liking the verdict, is not evidence of wrong doing). Do you have some evidence? Again, evidence, not opinion of news stories. No? Then sorry, not interested. I'm actually more interested in the Royal's new baby... and I'm not the least bit interested in that.

For those who keep trying to get an opinion out of me on the zimmermartin trial, what I had to say about the matter last year, pretty much goes the same for this year:


"If we had a way of knowing what happened and who was to blame, we’d have no need for a Judicial system.

That is the very foundation of the Western concept of Justice, indeed of society. Clearly these people who are so loudly and violently calling ‘for justice!’, have no interest in Justice, whatsoever."

On the other hand, the Left one of course, if government officials, like an Attorney General or a President for instance, would like to raise some noise about trying the case again in order to get a 'better' result... well... that I do have an opinion upon... but there's really way I could fit that in this post, but in lieu of that long long wind, how about simply reviewing the Fifth Amendment? You don't even need to read the whole paragraph, just this clause will do:


"... nor shall any person be subject for the same offence to be twice put in jeopardy of life or limb..."

Of course, if all those years of college 'education' has made it too difficult to actually think about such a non-PC concept as that, you could always let Justice Joseph Story's commentaries on it get you started:


"§ 1781. Another clause declares, that no person shall be subject, "for the same offence, to be twice put in jeopardy of life and limb." This, again, is another great privilege secured by the common law. The meaning of it is, that a party shall not be tried a second time for the same offence, after he has once been convicted, or acquitted of the offence charged, by the verdict of a jury, and judgment has passed thereon for or against him...."

That's not that complicated, is it? Simple enough for even an adjunct law professor to understand, isn't it? And I can't resist adding this next part about the nature of jury trials, especially the bit towards the end,


"§ 1785. The other article, in declaring, that the accused shall enjoy the right to a speedy and public trial by an impartial jury of the state or district, wherein the crime shall have been committed, (which district shall be previously ascertained by law,) and to be informed of the nature and cause of the accusation, and to be confronted with the witnesses against him, does but follow out the established course of the common law in all trials for crimes. The trial is always public; the witnesses are sworn, and give in their testimony (at least in capital cases) in the presence of the accused; the nature and cause of the accusation is accurately laid down in the indictment; and the trial is at once speedy, impartial, and in the district of the offence. Without in any measure impugning the propriety of these provisions, it may be suggested, that there seems to have been an undue solicitude to introduce into the constitution some of the general guards and proceedings of the common law in criminal trials, (truly admirable in themselves) without sufficiently adverting to the consideration, that unless the whole system is incorporated, and especially the law of evidence, a corrupt legislature, or a debased and servile people, may render the whole little more, than a solemn pageantry. If, on the other hand, the people are enlightened, and honest, and zealous in defence of their rights and liberties, it will be impossible to surprise them into a surrender of a single valuable appendage of the trial by jury." 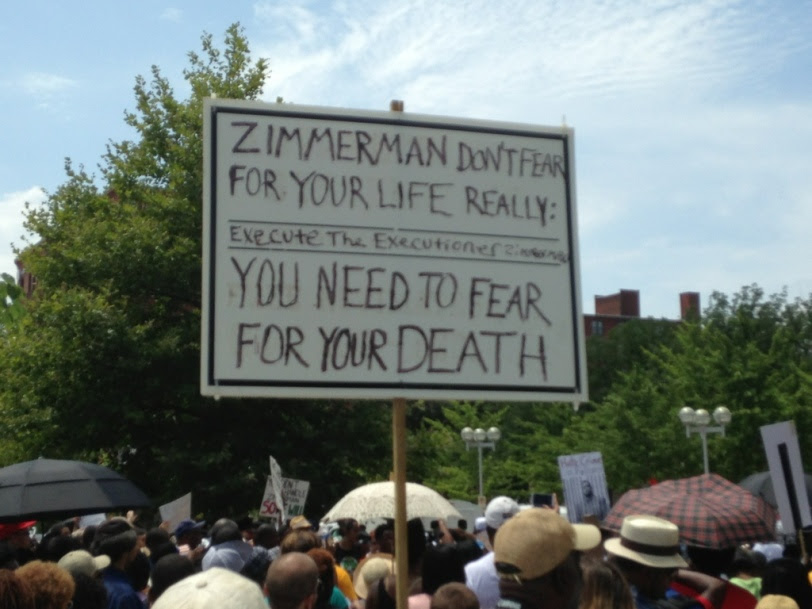 IOW, if you are calling for "Justice for Trayvon!", such as those in this picture Stacy Washington took at the St. Louis rally, now, after a trial has already been held, in which evidence has already been presented and argued and a verdict of "Not Guilty" has been rendered, then please, stop pretending as if Justice is of any interest to you at all. You're simply spewing out words of thoughtless thuggery which someone else put in your mouth. Which is just gross.

And if you do have an interest in preserving your Rights and Liberties, then when you do hear someone talking such non-sense as "Justice for Trayvon!", point out that justice has already been served - a trial has been held and a verdict has been rendered - and ask them to explain themselves. It probably won't take much more than their own explanation of what they said, to show what a foolish thing it was to have said it.
Posted by Van Harvey at 12:03 AM

Well said, Van!
The only injustice I see is coming from the AG, President and media, all of which are ignoring the evidence of this case and repeating the lies.

They are trying to use this case to increase gun control and get rid of self defense laws.
Oh, and stir up racial strife.