The Virtual Rapists of the ProRegressives Virtual 'Men'

The other night a fine representative of The Huffington Post, made his argument in the only way it could be made, with force and insult, rather that reasoned argument.

What is worth taking note of is not that he had no argument - that's their norm - but that his substitute for it, was to suggest that the person he was arguing against, Dana Loesch, should be raped for not believing in the anti-gun agenda, as he does. Katie Pavlich asks:

"Are you shocked? Because I'm not. It's no wonder Robert is anti-gun, that's usually the case with progressive men who promote rape against women (conservative women in particular).

Loesch pointed out on her Twitter feed that attacks like the one above are the reason why many women don't get into politics and thanked her supporters for condemning Robert's comment.

"I appreciate you all who speak out against these morons. You show other women that if they take heat over free opinion, they have allies," she said. 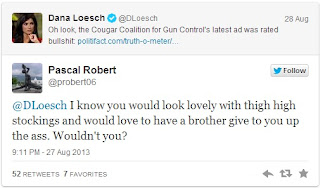 As she notes, this is far from an unusual tactic from the proRegressives. It is however slightly unusual that this wasn't just the typical run of the mill proRegressive hate monger.

Take a gander at the Twitter feeds of Dana, or Michelle Malkin, or Stacy Washington or any other women of the Right (who BTW make up more than a majority of the Tea Party), and you'll see what I mean.

Conservative women who've dared speak out against the politically correct religious dogma of the ProRegressives - which the rest of us refer to as politics - are routinely subjected to what anyone with a sense of decency, would find to be highly obscene.

What is a teensy bit unusual in this case, is that this particular scumbag is an official blogger of The Huffington Post.

This'd be the same HuffPo that has been railing against the Right for conducting what it calls a 'War on Women'. HuffPo, prime purveyor of Offendocratic politics, the sort on online rag who screams out in offended outrage whenever anyone on the right should suggest that our government should not be paying for birth control, welfare, etc.

But when one of their own official bloggers spews out his desire for a women to be raped, for the crime of disagreeing with his creed - there is not a word of offense or outrage by Huffington Post, Ariana Huffington, or anyone else on the proRegressive left.

Because the sense of outrage they appeal to in all of their Offendocratic particulars, is not their sense of what is, and is not acceptable, but ours. They scream their outrage, not because they are outraged, but because they realize that our sensibilities can be appealed to with a minimal amount of spin, which more often than not, causes us to side with them against our own representatives.

It is the decency of the Right, which Offendocrats appeal to, and expect results from - not any such sense of theirs.

The ProRegressive on the other hand, left or right, does not derive their ideology from what they believe to be Right and True, but from what they pragmatically calculate will advance their cause.

Which explains why The Huffington Post will likely remain silent on the issue.

Calling out their own for outrageous comments does not advance their cause, and so it is of no use or   interest for them to care about or even acknowledge this or any similar incident. Advancing the cause is the virtual virtue of the ProRegressives.

But that doesn't mean that there will be no consequences for these comments, or the failure to acknowledge or denounce them.

For the ProRegressive's virtual men to use sexual actions as a means of insulting and intimidating women, is to transform themselves into virtual rapists. For the Institutions of the ProRegressive left, such as The Huffington Post, to not only condone but to purvey such virtual rape of those who disagree with them, is to be actively conducting far more than a virtual war on women.

For the virtual men of the ProRegressives, left and right, to insult, threaten, even pine for, the rape of women of the right, is to commit virtual rape in order to advance a political cause, and to feel virtually virtuous in doing so.

And if anyone thinks that our acceptance of such thinking will not have dire affects in the real world, they are living in a virtual reality of their own.
Posted by Van Harvey at 1:42 PM