Ranting against rioting in Ferguson, MO

I too am upset at how the police and our governor have handled the rioting in Ferguson; not for their use of force, but for the lack of it. No one can be secure in their rights in the presence of a mob. There is no right of peaceful assembly if what you are assembling as is a riotous mob gathered in the middle of our public streets, violating everything from traffic laws to disturbing the peace, engaging in the destruction of property and violence, well into the night, and chanting threat's against the community and against the police. And on top of that, we've got communist agitators from Chicago who've inserted themselves into the rioters to egg them on to the violence they much prefer to voting booths. 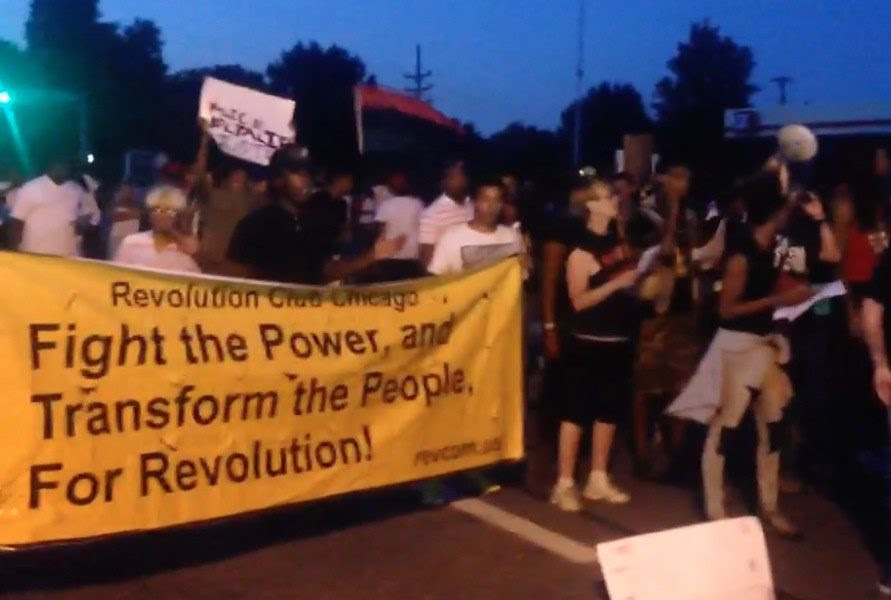 Honestly it is such a clear cut case for the legitimate use of force as I can imagine. My uninformed non-professional law enforcement advice would be something along the lines of giving the order:


"Disperse or be shot. 10 seconds". Count to 10. Shoot and arrest whoever is still there 1 second later.

If the actual professionals have a more effective tactic that will cause less harm and loss of life, fine, but if that tactic leaves a mob such as this in place for even an hour longer, let alone night after night, then that tactic is doing actual damage to the real rights and safety of those living and working (!) in the immediate surroundings, as well as to the wider community at large. Ya know what happens when you depend upon tear gas to disperse a mob? They move their mob and destruction to another location! There's video on Facebook of the screaming mob running from where they were being tear gassed, to another QuikTrip down the road, which had nothing to do with the original 'cause', but was being overrun and looted!

This prolonged rioting and looting is doing real damage to the safety and security of the entire area and to credibility of the police who are the representatives of law and order for all, and as such it is absolutely unacceptable to allow it continue one moment longer.

To concern yourself with the self-esteem or safety of the rioters, at all, rather than with the people who live in that community, and those surrounding it, who are losing sleep, work, businesses and even forcing children to stay home from school day after day, if your first concern is not with those who are being forced to survive under such a blatant and direct threat to their peace, security and safety which such mob violence poses... well, that is as disgusting a display of ignorance as our modern educational system can boast of.

Listen up: There is no more fundamental duty of government, and specifically of the Police, than to secure the peace so that its citizens can pursue happiness, secure in their lives, rights, liberty and property. To fail in that, to knuckle under to such a direct threat and disregard for the rule of law which a mob is the manifestation
of, is despicable. I could source & cite references from our Founder's era, on back to Cicero and the ancient Greeks to bolster that position, but frankly I should not have to and not a single one of you should need supporting references to 'okay' what should be clear and obvious to a few moments deliberate thought.

To top it off, a friend of mine, Martin Baker, has been one of the few voices calling for calm from the supporters of the police and from those supposedly supporting the family of Michael Brown, one of the few calling for the equal application of the laws, for justice, and for his pains he has been subjected to such a vile stream of insult and slander as can be imagined.

One pitiful excuse for a reporter, Jon Swaine, Tweeted that

There are perhaps 125 people at this pro-Darren Wilson protest. 124 white people and Martin Baker, aged 44

What he failed to report was where else Martin was in attendance, as Dana Loesch noted:


How nice that @JonSwaine incited everyone to attack Navy veteran #MartinBaker by withholding this photo:
— Dana Loesch (@DLoesch) August 18, 2014

Now, what with my not being a journalist, perhaps someone could clue me in
as to why, being fully aware of Martin's presence at the rally for Brown, why the first question that this 'reporter' asked wasn't:


"Where are all the other supposed black leaders of the community at the event calling for equal justice for all?"

Instead, he tries to somehow make Martin look bad for actually having the good sense, and guts, to be at both rallies.

Another friend of mine, Stacy Washington, has been receiving threats against herself and her family for also daring to call for law and order while black:


Last night people threatened me on radio because I said we should wait on #Ferguson investigation result. Today, they mock #MartinBaker
— DarthBossyness (@StacyOnTheRight) August 17, 2014


How hideously stupid of a fool must a person be to attack someone else because they are standing up for Law and Justice for all? Apparently the answer can be demonstrated for you by nearly any available leftist you can find, if you simply mention that Martin Baker is black and is also calling for equality before the law and justice for all. Like this idiot Swaine, they'll fall all over themselves to give you a demonstration of just what racist stupidity looks like in real time.

Ladies and Gentlemen, if you look upon the scene in Ferguson and think to yourself primarily about skin color - whether in terms of favoring or opposing the rioters doesn't matter - then you are as foolish as you are bigoted. If you base your arguments, pro or con, around skin color, then your have self-identified yourself as being racist and incapable of coherent thought.

While this rioting has been tolerated and chiefly dealt with by Governor by press conference, the rioters, operating from the clear and present danger of a mob, have been openly making threats into news cameras and tweeting out threats to bring their violence to the surrounding communities, including numerous threats to take the violence to the neighborhoods across the bridge. Well my community is across the bridge, and as such we've had multiple SWAT teams mobilized and even staked out around our mall because those threats have been taken seriously.

While I am a supporter of the Individual Rights which the 2nd Amendment defends, I've never owned a gun and haven't wanted to, for no other reason that I never felt the need. And even today a burglar is still more likely to receive a mix of ball bearings & bb's in the face from my wrist rocket, than a blast of buckshot from my new shotgun, that form of defense is utterly useless against the sort of mobile mob-in-a-car that we've been threatened with, and so now having been threatened, I feel a need to be able to respond.

But because our Individual Rights are so little respected, because property rights no longer have much real standing in the law, and because so few other actual rights are even attempted to be upheld today, or else are so thoroughly corrupted in practice, there is little more than complete confusion on the issue of what to do about violent mobs rioting and disturbing the peace. And because every branch of the Govt., State, media, wackademia, etc, have been complicit in this state of affairs about, now when we are faced with such a clear cut, basic legitimate function of the State and the use of force, they think themselves entirely helpless as to what to do about it.

And We The People are so damn screwed.
Posted by Van Harvey at 11:50 PM

Email ThisBlogThis!Share to TwitterShare to FacebookShare to Pinterest
Labels: #Ferguson, #MartinBaker, Rioting, The Rule of Law

Couldn't agree more Van.
Initially, I thought Capt. Johnson would use his obvious leadership skills to establish order and the rule of law.
Sadly, he too has inserted himself into this case and has not done his job.

Following Obama's lead, Nixon has also inserted himself into the case ignoring the evidence and calling Brown a victim.

Obviously, he doesn't care about truth or justice, and is quite willing to sacrifice Wilson for doing his job in spite of all the evidence exonerating him.

Pandering to a bloodthirsty mob that believes the false accounts of Brown's death is just fine for this fool because he doesn't care about the oath he took as long as he retains his power.

Of course, so-called journalists on the left are helping to inflame the situation and are also ignoring the truth.
Thankfully, we can still find out the truth thanks to guys like Jim Hoft and Dana Loesch.

However, that will never excuse these leftwing agitators from stirring up more trouble with their lies nor their efforts to get Wilson, your friend Martin and others hurt, or worse.

These agitators are disgusting, vile and just as bad as the thugs who are in Ferguson to steal, kill and destroy.

Van,
I'm so frustrated and upset for you and your neighbors.

Thank you for writing this.
Leslie G

My wife has been worried about her cousin who lives in St. Charles.

I think a curfew is a good idea -- something objective to enforce -- and, as is the case with a natural disaster, shooting looters should be the known and stated rule.

Does Nixon think this is going to help him out-state when he runs against Blunt? I think it is going to kill him in St. Louis -- not that I'll be crying if he loses.

Thanks all. And Mushroom, yep, I know how your cousin feels - we share the same mall.

As long as the curfew is accompanied by a temporary state of emergency, I don't have a problem with it, but if you're going to go with half measures, I think the one they came up with last night, forbidding loitering and keeping the people walking, is probably going to have the best results.