"...And lest we get on our high horse and think this is unique to some other place, remember that during the Crusades and the Inquisition, people committed terrible deeds in the name of Christ. In our home country, slavery and Jim Crow all too often was justified in the name of Christ...."

Really. Sooo... let me get this straight: You want to justify the barbaric mentality of the middle ages being resurrected by ISIS today, by (misleadingly) referencing our own behavior during those long past middle ages? 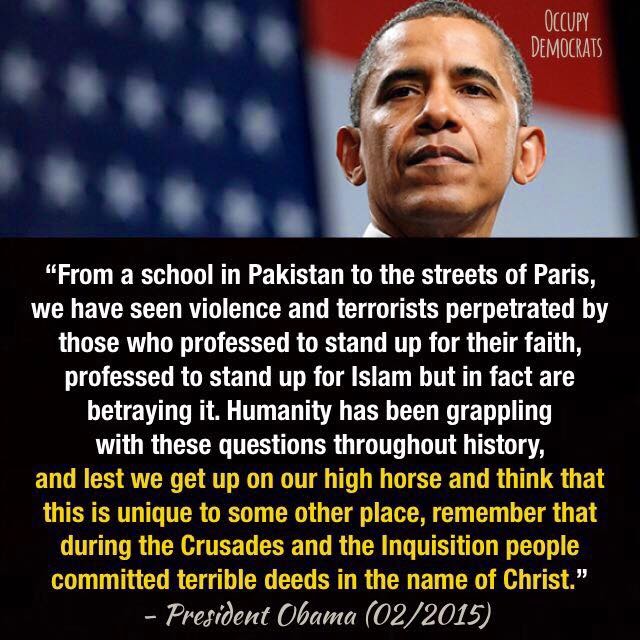 Dude, you're missing your own point! Would you scold your fellows for objecting to someone in a workplace who punched someone else for annoying them by saying "Remember, in the 3rd graded you did that too"?

We left the Middle Ages in the Middle Ages where they belong. ISIS is bringing them back. We separated Church from State, they see them as the same thing. We moved on, they're not only trying to go back, but to drag the rest of us back with them.

And you have the audacity to to call drawing a moral equivalence between barbarity today and supposed barbarity then, thoughtful? Wise?

Piggy-backing on that epic twittery, we have the dailykos with some truly top-notch Hate-America-Firsterism.:


"..American Exceptionalism blinds those who share its gaze to uncomfortable facts and truths about their own country.

For almost a century, the United States practiced a unique cultural ritual that was as least as gruesome as the "medieval" punishments meted out by ISIS against its foes..."

Tell me, aside from that heinousness - a heinousness which, BTW, ISIS aptly demonstrated as NOT being an exclusive trait of Americanism, but of being human - aside from that also being relegated to our past, was that period of our history ended by trying to make the racists feel more comfortable amongst us?

Did we end that by allowing their 'laws' to spread unmolested? By trying to empathize with their unique views?

Did we end such lynchings by treating them with respect (hint: if your brain comes up empty, consult Hollywood (good and bad))?

Or did we end it by calling them out for the barbaric disgraces they were?

I don't know about you, but if someone speaks wistfully of such bygone traditions, I've got a ration of condemnation and vitriol ready browbeat them to dust and sweep them from my company. And I sure as hell wouldn't, under any circumstances, attempt to use it as justification for similar atrocities.

But maybe that's just me.
Posted by Van Harvey at 3:32 PM