No, the Rule of Law did not just die with the FBI's recommendation of no prosecution for Hillary, it's just that the nearly century long "Weekend at Bernie's" has finally come to a close - it is dead, but it happened long before today, and although dead, it's only mostly dead.

If you haven't seen the movie "Weekend at Bernie's",


"Two losers try to pretend that their murdered employer is really alive, leading the hitman to attempt to track him down to finish him off." 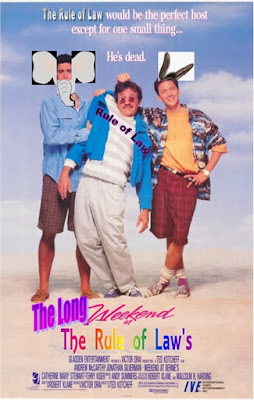 , give me a moment, and it's plot will become familiar to you.

Keep that narrative in mind as we review the facts, which begin way back in 1837, when the Rule of Law had contracted a lethal disease in the Charles River Bridge v. Proprietors of Warren Bridge case, so much so that one of the deans of American Jurisprudence, Chancellor Kent, wrote in The New York Review, that


"A gathering gloom is cast over the future. We seem to have sunk suddenly below the horizon, to have lost the light of the sun."

, and when famed lawyer Daniel Webster desperately fought to save it, on losing the case, he simply, and he remorsefully stated, that it meant


"That's the death of property rights."

Sadly, those who might have cured its disease, the colleges, had themselves been infected, and soon after wards took to their deathbeds as well, dooming the entire Educational System to a similar fate, and so no relief was ever able to come.

By 1913 the disease had metastasized and spread to the patient's Constitutional System through the 16th, 17th & 18th Amendments, and from them to its political system, and for those paying attention, it was clear that the end was near. And so, sadly, in 1938, at the close of the Gold Clause Cases, Justice McReynolds pronounced that:


"this is Nero at his worst. The Constitution is gone."

, and so, tragically, nearly eighty years ago, our dear Constitution, together with its close companion, the Rule of Law, had officially died of its Progressive infection.

How did you not know of this?

Well, the news of their demise, if made known, as in the movie, it would have made matters very uncomfortable for two rather opportunistic and deeply desperate characters, an Elephant and a Donkey, who contrived a bold plan to take turns moving the body about admidst the crowd of drunken party goers, as often as necessary in order to make it seem to still be alive. So they'd move an arm here, shake its head there, and amazingly, everyone was fooled! Naturally though, as their interests conflicted, they sometimes battled over the body, leading to awkward moments where the eyeglasses would fly off here and there, but remarkably, in deep, dark comedic fashion, they pulled their ruse off.

Today, following shortly after former President Bill Clinton's secret (almost) meeting with Attorney General Lynch, and on the day after the 240th anniversary of the Declaration of Independence, the long "Weekend at Bernies" finally came to a close, as it was no longer possible for anyone to pretend, with a straight face, that the body was still alive, no longer possible to mask its death with only a pair of dark glasses and clever repositioning of the corpse, as the fumes of bodily corruption and decay seeped out in the FBI director Comey's presser announcing that Hillary Clinton had broken numerous laws, but would not be charged because, seriously, she's Hillary Clinton, "no reasonable prosecutor..." is going to take that case.

Not even CNN could swallow that one whole.

But I've forgotten to mention the third character in the "Weekend at Bernie's" plot, haven't I, the hitman - who is that? That'd be modern philosophy, and it goes under many aliases: Misosophy, Marxism, Pragmatism, Pro-Regressivism; but whatever name it goes by, what it depends upon is your accepting that what IS, isn't. Reality is deniable, unidentifiable, that reality 'in itself' is something beyond our ability to know... which ultimately means that reality is whatever you want it to be. How else do you think we got to the point of men 'identifying' as women? That Truth and Justice are meaningless because there is no truth, only what 'works' (for the moment). But what it all comes down to, is if your words have no meaning, there can be no Rule of Law, only its Doppelganger, the Rule of Rules.

Can you guess who it is that is served by the Rule of Rules? That's right, those with the power to make the rules, transforming "Justice" into, as one Meme wag put it:"Just us!"

So yes my friends, the Rule of Law has died, but that death occurred long, long ago. What is important now, however, today, is that people not attempt to remember it by the grotesque positions that the body has been placed in over the last eight decades, or even to focus on those later judgments that were given during the advanced moments of its deep illness. Instead, We The People should do our part to remember the Rule of Law when it was in fine health and good condition, fully alive and in control of its faculties, when its sole purpose was to uphold and defend our Individual Rights and Property under the understanding of Natural Law. Never forget, that the Rule of Law, Natural Law, Individual Rights and Property, are ideas, integrated concepts that enable men to know what is, and as such, they can't truly die, it only requires a people to attend to them, learn and understand them (as I'm attempting to help with in these posts), for them to live in that people's heart once again.