"I am done." I've heard that so often lately, and from all corners, especially after the Missouri Primary election yesterday, where, IMHO, the worst candidate won. But what does this damned 'I am done' mean? Do those who mutter it, understand the highly unflattering things it says about themselves? 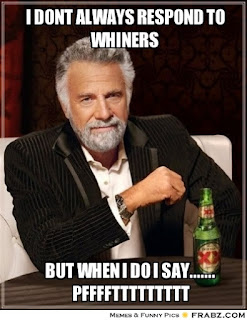 Of course I get the emotional knock that seeing your, and even the two other decent candidates in a race, losing to who you - probably rightly - consider to be an unworthy candidate. It is frustrating.

But leaving pure emotional impact aside, if the comment "I am done" reflects a serious judgment, I've got to ask, in all seriousness,

There are things worth fighting for, but don't make a damn fool of yourself by pretending that you know for certain what the outcome - positive or negative - will be. We don't know the outcome, we can't know the outcome, and any sense that we are assured of an outcome, is vanity, naivete, massive self conceit and folly!

If you are thoughtfully moaning that 'America is done for!', do you realize what that says about you?

There is only one thing that made America possible, and which then actually made America, and that is caring about what is right and True, realizing that it doesn't exist in a vacuum, but as an integrated whole, and that the truth can be known and is worth knowing, and worth adhering to it - not because it guarantees a beneficial reward, but because it is right and true, and in and of itself that is all the justification or reward necessary.

If you are whining about America being lost, and tearfully asking

, the answer - if you are actually interested in it - is a simple one:


When we again become a people who strive to be a nation of moral, self governing individuals, capable of living lives worth living in society with others, under the Rule of Law - not to achieve order, but to seek Justice (and wise enough to know that order will follow from that, secondarily)

, then, and only then, will we be a nation of Americans again.

The secret sauce in that, is no one needs to wait for the nation to be restored to being America again, in order to experience that profound and exceptional satisfaction of being Americans themselves, now - and indeed if you only seek it for that (an assurance of 'success!'), you've probably already barred yourself from it - you do it, live it and teach it, in whatever way that you are capable of, what it means to be an American, as best you can, to whoever you can, because it is right and a reward in and of itself.

If you want to feel sorry for how tough you have it, and how bad things are, tell it to people like Sam Adams, who struggled, often alone, for nearly 30 years before his fellow countrymen became Americans and made their Declaration of Independence... and then fought through years of revolutionary civil war, a failed constitution, and then, finally, after much disagreement, they established and ratified the Constitution of the United States of America (which, btw, Sam wasn't all that hot for, at first).

He had something to whine about. You? Not so much.

If you can't realize this in moments of contemplation, then rest assured that you've lost nothing - as you never had any part of that great value to begin with, and so can feel no real sense of loss for what you never had or were a part of.

I don't know if our, my, America will 'win' out again in the popular sense, but I do know this, if we do, eventually it will be lost again - that's the reality of human life and the nature of being human. But here's a more important reality: Success isn't the justification for attempting to succeed, and if you think it is, you are a fool. Failure, loss, eventually, is far more likely and assured, but again: guaranteed results are not the point... realizing and striving for the best, as best you are able, is.


"’Tis not in mortals to command success,
But we’ll do more, Sempronius; we’ll deserve it."

If you think that guarantees are possible or what you should be striving for... you've already failed. It's hard to pin down where this notion came upon us, that succeeding as Americans is rooted in what others think and do (though I'd readily point to at least the last 150 years of 'educational reform') but know this, what you embody and teach to your kids, friends and co-workers, is what has the only chance of making America great again. It is up to you - that's what the meaning of IS is - don't puss out and pass the buck by whining about how unlikely it is that America can be restored. Shut the hell up already, you don't have a Crystal Ball, and it wouldn't matter if you did.

All that is, or ever will be, in your power to bring about, is what you do, inspire or teach others to do, and that, in and of itself, is admirable and sufficient. If you think you are capable of 'changing' the nation by any other means, you're not only a fool, but a danger to what you supposedly revere.