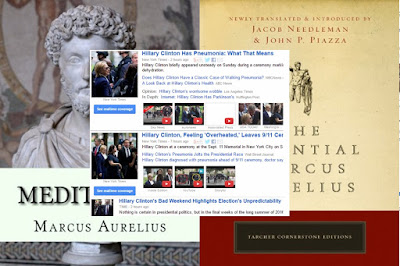 Wouldn't it be nice if we didn't need translations?

I'm often frustrated with the fact that I've never learned to read Greek or Latin - I've taken a couple feeble stabs at it, but the usual excuses find there way into the moment, and... then the moment conveniently passes you by... and you need someone to translate that which interests you, for you, which means that I continue having to take my classical era 'food' in, second hand. In trying to counter that as best as possible, I enjoy reading different translations of the same work, sometimes, like today, at the same time, so that the differences that come through the different translators translations often seem striking, giving you a wider perspective on, and, hopefully, a fuller understanding of, what you're reading.

This morning I was reading the 2nd century Roman Emperor,Marcus Aurelius's, 'Meditations', through one 19th Century translation by George Long, and another recent translation by someone I often enjoy disagreeing with on other topics, Jacob Needleman, and John P. Piazza. Anyway, the different flavors that come through the translations range from mild to startling, but an example of mostly the routine, 'small' differences, that you come across, is this one, from section 1.7, where Aurelius's is reflecting on his thanks 'to a Stoic philosopher whom Aurelius valued highly', where he says, through these two different translators,


"... and with regard to persons who have offended me by words, or done me wrong, to be easily pacified and reconciled, as soon as they have shown a desire to be reconciled; and to read carefully, and not to be satisfied with a superficial understanding of a book; nor hastily to give my assent to those who talk overmuch; and I am indebted to him for my acquaintance with the discourses of Epictetus, which he gave me out of his own collection."


"...Also, to be eager for reconciliation and meditation with anyone who, having lost their temper and caused trouble, wishes to return. To read with precision and not be satisfied with the mere gist of things, nor to agree too quickly with clever debaters. Finally, to have encountered the discourses of Epictetus, which he provided for me from his own library...."

The differences in the translations of this passage seem like fairly straight forward differences of choice, and one does seem to complement the other, but that is often not the case with those who we've trusted to translate the words and wisdom of past masters, so that we can benefit by them. There are some translators (and in fact many of the celebrated translators of the 19th century), as Allan Bloom notes in the forward to his excellent translation of Plato's 'Republic' who often took it upon themselves to, in their translations, 'correct' the likes of Plato, Aristotle, Sophocles, etc., by literally (!) putting those words into their mouths which they themselves felt sure should have been said by them, rather than simply translating those words that they actually wrote, and which they the translators were supposed to be translating, for our benefit.

A further interesting note, Marcus Aurelius, a Roman, like most Romans of his time, did not use his native tongue, Latin, to write or converse on philosophic matters, because they found it to be too 'clunky' of a language. So they wrote, even privately to themselves (as Aurelius was doing - his meditations were more like a personal diary of his thoughts, than something meant for public publication), in Greek. So here's lil' ol' me trying to learn from a Roman Emperor, who was writing in Greek, in the years between 167 - 180 a.d., which was then translated into English by a scholar in 19th century England, and by an American academic philosopher in 21st century America, which, for me, is fascinating. Fascinating to see the words that they agreed upon, fascinating to see the similar but not quite same terms they used in others, and how the choices of one, shed light upon the choices of the other, especially in regards to the (Long)


"nor hastily to give my assent to those who talk overmuch"


"nor to agree too quickly with clever debaters".

Anyway, what brought this to mind in more stark relief than normal, was that while reading these translations side by side, I was also seeing and hearing the different accounts of Hillary's leaving the 9/11 ceremony this morning, ranging from:
, and it struck me how in hearing news reports from the likes of CNN, MSNBC & Fox and all the other options, our position as Americans attempting to find out what is happening in America, here and now, is very much akin to the difficulties, challenges, and fascinations to be found in reading different translations of a book that comes down to us from a long dead author in a different era, a different language and a different culture and land, where we have to rely upon how a translator not only picks and chooses to translate the words which the original author used, to match the translator's own sensibilities, to which they often add, drop, convey, or go to pains to explain what the author 'must have meant', rather than telling us what they actually said. So remember folks, that when reading or even (especially) watching the NEWS, do remember that we are engaging with our world through the translations of translators who are trying to tell us not only what was said and done, but through their interpretation of what was said and done (or should have been).

Bottom line, in reading the News of the day, or in reading what was once new, ages past - whether in your own language or on being translated into 'your' language - you must try your very best to not only understand what has been said and done, but to then think it through yourself in order to truly understand what needs to be understood, by you, in your life, here and now - otherwise it might as well all be Greek to you.
Posted by Van Harvey at 11:37 PM