McConnell on Healthcare Failure: ‘Everybody Has Given It Their Best Shot’ 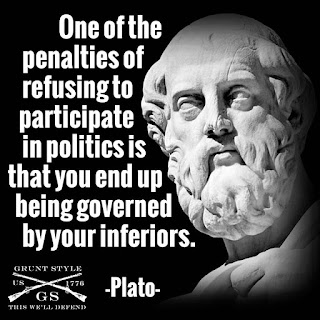 
"...And for this reason, I said, money and honour have no attraction for them; good men do not wish to be openly demanding payment for governing and so to get the name of hirelings, nor by secretly helping themselves out of the public revenues to get the name of thieves. And not being ambitious they do not care about honour. Wherefore necessity must be laid upon them, and they must be induced to serve from the fear of punishment. And this, as I imagine, is the reason why the forwardness to take office, instead of waiting to be compelled, has been deemed dishonourable. Now the worst part of the punishment is that he who refuses to rule is liable to be ruled by one who is worse than himself. And the fear of this, as I conceive, induces the good to take office, not because they would, but because they cannot help --not under the idea that they are going to have any benefit or enjoyment themselves, but as a necessity, and because they are not able to commit the task of ruling to any one who is better than themselves, or indeed as good. For there is reason to think that if a city were composed entirely of good men, then to avoid office would be as much an object of contention as to obtain office is at present; then we should have plain proof that the true ruler is not meant by nature to regard his own interest, but that of his subjects; and every one who knew this would choose rather to receive a benefit from another than to have the trouble of conferring one. So far am I from agreeing with Thrasymachus that justice is the interest of the stronger. This latter question need not be further discussed at present; but when Thrasymachus says that the life of the unjust is more advantageous than that of the just, his new statement appears to me to be of a far more serious character. Which of us has spoken truly? And which sort of life, Glaucon, do you prefer?..."

Which do you prefer?

What chance do you think there is that you'll get it?