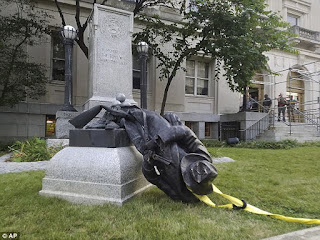 I have no love for the figures that had first been named, Teddy Roosevelt, Roger B. Taney, or any of the figures of the Confederacy. While I recognize that TR was a 'larger than life' figure, I despise him
as the first one who popularized and legitimized every anti-constitutional measure that was later pushed through by Wilson, Hoover, FDR, Truman, Johnson, and finally by Obama (regulatory agencies, income tax, govt controlled and funded education, govt controlled health care...).

Roger B. Taney, a justice who served as Chief Justice on the Supreme Court prior to, and during, our Civil War (appointed by founding Democrat, Andrew Jackson), is someone that, IMHO, should be vilified by every teacher in America to their students, and not only for his racist, pro-slavery Dred Scott decision, but at least as equally, for his reasoning behind the SCOTUS's first significant case which denied the value and standing of property rights - and so the standing of all Individual Rights, and hence the later Dred Scott decision. It was Taney, who led the majority on the court in the "Charles River Bridge v. Warren Bridge Company", case in 1837, in favor of the pernicious notion that what 'the people' wanted 'for the greater good' (as conveniently conveyed by those in positions of power), should be made to trump objective law. The most famous lawyer and orator of early America, Daniel Webster, who fought the case and lost, called it


'the death of Property Rights'

, and the father of the American legal system, Chancellor Kent, a towering figure in the early formation of American Law, whose views are cited in numerous SCOTUS opinions, said of that decision in The New York Review,


"A gathering gloom is cast over the future. We seem to have sunk suddenly below the horizon, to have lost the light of the sun."

I have zero regard for any of the usual Confederacy friendly suspects, or for the Confederate Flag, but for anyone with an actual regard for History (and an interest in the quest to 'Know Thyself'), these statues and all other such reminders, should be made to serve as a means to do what history does best - to teach us about ourselves and the dangers we are so easily prone to slip into. They should be daily used to remind people of how easily those who are otherwise capable, worthy, courageous, honorable, etc, can have their better qualities turned to the service of villainy and evil. And especially to remind us of how easily, an entire people can find themselves drawn into supporting and cheering for them, in the 'spirit of the moment'.

Rather than remove these symbols it would probably maximize their value, if with each passing decade, we were to place an additional plaque upon them, explaining that period perceived their esteem, or lack of it, for them - that would give some sense of history in action. 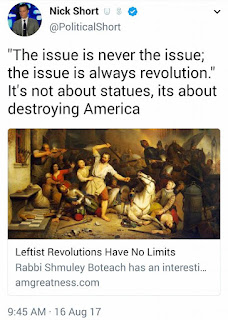 But for those of you who are honestly considering this matter, you should be aware that those iconoclasts who're engaged in the physical act of attacking objects of our nations history, they are not engaging in any form of honest actions or intentions. Consider, for instance, what it is that they are attacking - these are representations and symbols of our history, of our past (?) ideas and actions, in the effort to eliminate them.

Would you want them to follow those same means, in our public libraries? And if you say, "Well, these aren't books, they're just statues, plaques, names on parks and street signs", ask yourself if you think that there's a difference between a mob assembling and kicking over a park bench, or assembling to kick over a statue? And if so, why would attacking a thing, be different from attacking a symbol? 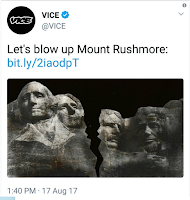 If you do agree that there's a difference, then you should be aware that historically, iconoclasts (a person who attacks cherished beliefs or institutions) such as these, only begin with attacking objects and symbols, but they have no intention of stopping there... that's just a way of edging up public's weariness and acceptance of their violent means, which will soon be directed towards attacking institutions, public spaces and beliefs (and is already moving in that direction), individual people, and then entire peoples.

If you pay attention to what people have done throughout history, rather than simply attempting to topple historical objects, you'll discover that once beasts such as this are allowed to feed, they do not stop. My friend Patch has some points on that matter, worth your while to consider.

BTW, if you didn't acknowledge that there's a difference between kicking over a park bench, and a statue, then I acknowledge your superior ideological ability to resist reality, and I caution you to consider that eventually the Nazis' you are encouraging people to punch, will be discovered to be you -  and with that, I invite you to move along.
Posted by Van Harvey at 10:31 PM