Gorsuch vs Thomas: An object lesson in Constitutionally rooted disagreement

Wow. USA Today ran the headline of this SCOTUS decision on immigration law as "Neil Gorsuch sides with liberals to tip decision to immigrant in Supreme Court deportation case", which seems like a selective bit of spin, to say the least. But it did get my attention, and so I began, and am still reading, the opposing opinions  in "Sessions v. Dimaya" of Justice Gorsuch (for, beginning on pdf pg 31) and Justice Thomas (against, beginning on pdf pg 65), and I tell you what:This is good reading! 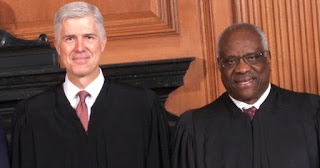 As I began reading Gorsuch's opinion, I was nodding at nearly every point, with a sense of "How can you argue against that?".

And then as I read Thomas's opinion, he resoundingly struck back at each of those points - not so much by arguing against those points, but by going for a wider and deeper context which leaves them seeming to be less than decisive as relevant points, and I find myself thinking "ooOoohhh. Ah. I guess that's how... hmmm...".

At this point I'm not so sure of my take on it yet, and though I do have the sense that Thomas is going for the deeper substance, but I will have to beg off of agreeing or disagreeing with either one until I can take some real time with comparing one's point to the other's counterpoint, but I tell you what - if you want to see what it means to argue a point of law where both sides are respectful of the Constitution, you could do a lot worse than starting with these two.

What's more, I'm betting that a large number of coming Supreme Court decisions are going to hinge upon the balancing points of these two Justices' arguments.

"Vague laws invite arbitrary power. Before the Revolution, the crime of treason in English law was so capaciously construed that the mere expression of disfavored opinions could invite transportation or death. The founders cited the crown’s abuse of “pretended” crimes like this as one of their reasons for revolution. See Declaration of Independence ¶21. Today’s vague laws may not be as invidious, but they can invite the exercise of arbitrary power all the same—by leaving the people in the dark about what the law demands and allowing prosecutors and courts to make it up.
The law before us today is such a law...."

, and from Thomas's conclusion:

"...Surely the Court cannot credibly invoke stare decisis to defend the categorical approach—the same approach it says only a “lunatic” would continue to apply. Ante, at 24. If the Court views the categorical approach that way—the same way Johnson viewed it—then it must also agree that “[s]tanding by [the categorical approach] would undermine, rather than promote, the goals that stare decisis is meant to serve.” 576 U. S., at ___ (slip op., at 15). That is especially true if the Court’s decision leads to the invalidation of scores of similarly worded state and federal statutes, which seems even more likely after today than it did after Johnson. Instead of adhering to an interpretation that it thinks unconstitutional and then using that interpretation to strike down another statute, the Court should have taken this opportunity to abandon the categorical approach for §16(b) once and for all.
* * *
The Court’s decision today is triply flawed. It unnecessarily extends our incorrect decision in Johnson. It uses a constitutional doctrine with dubious origins to invalidate yet another statute (while calling into question countless more). And it does all this in the name of a statutory interpretation that we should have discarded long ago. Because I cannot follow the Court down any of these rabbit holes, I respectfully dissent. "

I wish all of our SCOTUS opinions were of this quality. Dare to dream!
Posted by Van Harvey at 6:58 PM