The Frauds of Free Trade, and the possible uses of Tariffs

As someone who holds Free Trade in high regard, I'm about sick of all of those on all sides of the issue, who toss the term about as if it holds no further meaning or purpose than to serve their personal political agendas. For instance, there are the direct frauds of 'free trade', such as Sen. McCain, and a host of others, who have been blathering on about President Trump's tariff talk, as being a threat to what they delight in calling 'Free Trade' between the G7 nations:

To our allies: bipartisan majorities of Americans remain pro-free trade, pro-globalization & supportive of alliances based on 70 years of shared values. Americans stand with you, even if our president doesn’t.
— John McCain (@SenJohnMcCain) June 10, 2018

There's just one teensy problem with that - for it to be possible to harm an actual Free Trade scenario between the nations of the G7, something resembling Free Trade needs to already exist between them - and it doesn't!!

These nations have not signed on to their pet 'trade agreements', concocted and employed reams of demands and requirements in carefully worded legalese, in order to say nothing more than:


"We pledge not to hamper, alter, favor or hinder anyone engaging in any form of trade across our borders."

Instead, they, and Canada is particularly relevant in this, have enshrined multiple tariffs against trade from the dairy, lumber, and other industries of the United States of America - not only is that not how Free Trade works, it eliminates the possibility of it, which means that the one thing that most definitely does NOT exist between the peoples of those nations right now, is Free Trade!  It is not 'Free Trade', but multi-national agreements of officially sanctioned intrusions into a Free Market, that are the '70 years of shared values' that the likes of John McCain are tweeting their support of, and to hear them pretending to defend 'Free Trade', is like hearing Jack the Ripper calling for chivalrous behavior towards women. 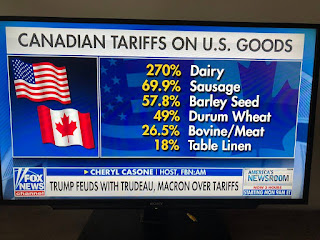 Free Trade is not brought about through governments imposing their restrictions, directives and penalties upon the peoples' attempting to trade across those nations borders.

Free Trade is what results when the political philosophy (which economics is but a subset of) of those nations, have created a Free Market to trade freely within, by establishing a Rule of Law that is dedicated to upholding the rights, property and contracts of their people.

Free Trade, and Free Markets, cease to exist when some or all of those nations write laws and treaties which use their political powers to alter, hinder, favor, and exploit what trade they do deign to permit between their peoples - no matter what you choose to call that, that is not Free Trade.

The truth is that where there exists a NAFTA, or a TPP, or G7 agreements, or ___ (fill in the damn blank), in place between these nations, cutting 'deals' that their people must conform not only their trade to, but more than a few slates of preciously politically correct policies, these manifestos of political manipulation, favoritism and corruption, ensure that there can be NO FREE TRADE existing between the nations involved in these agreements. Those who are peddling, supporting, enabling or ignoring the reality of these 'trade agreements', in order to continue this... fiction about 'Free Trade' being threatened, are, IMHO, the more egregious liars, hypocrites, and frauds involved in the process, not the person who is upsetting the collective apple cart by refusing to play along nicely in such deceitful schemes.


Trump shook up the meeting on Saturday morning by proposing to eliminate all barriers to global trade, a surprise turnaround from his aggressive tone on tariffs before the summit.

“No tariffs, no barriers, that’s the way it should be, and no subsidies,” Trump said during a 30-minute press conference in La Malbaie. "I did suggest it and people were -- I guess they’re going to go back to the drawing board and check it out."

Sorry, who's the threat to Free Trade?

But wait, there's more!
And then there are those constitutional experts who are using 'Free Trade!' and 'the Constitution!', to prattle on about how only Congress can create tariffs, not the President,  and in doing so are being more than a little disingenuous and obfuscatory. Yes, that is what is stated in the text of the Constitution, very true, as you can see in Article 1, Section 8, Clause 1,

, but there's more to the truth of the matter than that. Congress has passed a number of laws, that explicitly delegate that power to the President, giving him the ability to propose or impose Tariffs, with very few restrictions. Those laws have yet to be successfully challenged and overturned by the Supreme Court (good lord, even writers at Vox realize this - what's the 'experts' excuse?). So... unless you are advocating for pitching the entire congressional record, laws, regulations and codes (which... I'm listening), shut up already about the President not having the power of Tariffs.

FWIW, I don't think it's a good idea for a president to have that kind of power, but thanks to Congress's disdain for our Constitution, and their repeated preference for the Administrative State, the President does now effectively have that power.

... and the economics of cheerleading
And for the rest of you who are enthusiastically on Trump's side of this, stop beclowning yourselves by saying that Tariff's help the economy - they do not. Or rather, it is the easiest thing to point to what is helped by them, but it takes only a little more effort in thought and attention, to see the greater and more widespread damage that they do to the rest of the nation's economy, and to equal treatment before the law.

Frédéric Bastiat, in his 'What Is Seen and What Is Not Seen, or Political Economy in One Lesson', and in his 'Economic Sophisms', gave more than enough arguments and demonstrations of the truth of this, back in the mid 1800's, and just as 2+2 is still equal to 4, the truths he exposed and explained about the economic folly of tariffs (and other market interventions), are still, stubbornly, factually, true today, and for all tomorrows to come.

Tariffs are economically unjustifiable. But what about politically...?
Is there a place for Tariffs? Economically speaking? Again, IMHO, No. When government interferes into its citizens contracts in order to 'help' them compete with others from other nations (or within their own, for that matter), the appearance of helpfulness is an illusion. There is no credible justification for initiating the use of Tariffs to 'help' your nation's industry, and especially not to 'level the playing field' with another nation's people and industry, who are legitimately more productive in that area than your own. Ignoring and abusing that power, will result in real and immediate harm to the liberty, rights and property, of those you're ostensibly trying to 'help'. It is true that in the Founder's era, with the study of Political Economy still in its infancy, it was thought there was a justification for tariffs, which is why it was included in the Constitution. However, as was proven over and again within just 50 years of the ratification of our Constitution, on that matter our Founder's were mistaken. Oops.

Still... that doesn't mean that there isn't a political justification for using tariffs.

There is an argument to be made that Tariffs provide a viable means for political retaliation against nations that are improperly and aggressively using their political power to gain from economically damaging another nation's industries, and in a scenario such as that, Tariffs may well be justified in much the same way that retaliatory force is justified in response to physical aggression from an attacking person or an invading nation. Tariff's may well have a valid place in a nation's political arsenal, as a means of addressing economic conflicts, aka: Trade Wars.

But. As with any form of warfare, it is going to be costly, and it will do damage to their own economy, in employing it - neither side will benefit, except through the complete cessation of hostilities. The questions to be asked, are:
That is a dangerous game to play, and it only becomes moreso by treating these situations, as the economic questions they only appear to be, rather than as the weighty political issues they actually are. Such oversights can lead to  dangerous misjudgments, misapplications of power, and would almost certainly lead to deeper and more painful complications, conflicts, and unforeseen consequences, from their misuse.

But again, if Trump wants to threaten tariffs as a means of negotiating with other nations to end their tariffs, or as a means of political retaliation when they will not drop their aggressive policies towards us, then although I worry about the  possible consequences (which should not be taken lightly), I don't have a real problem with his doing so.

But if we persist in speaking of Free Trade, where it does not and cannot exist; if we insist that some presidents follow constitutional means while ignoring the legislative means that Congress has written to get around them; if we ignore economic realities in the face of partisan fervor; if we fail to identify the nature of the remedies we use, and remain ignorant of the real consequences those measures might bring about... if anyone expects that we can willfully ignore reality as a means to achieving economic benefits for America... we are all in for a very rude awakening.
Posted by Van Harvey at 11:56 AM