What the words 'Government' and 'Economy' really mean: You Living Your Life

What's become most interesting to me in the last few days, is that the Coronavirus is now providing a backdrop for people to see the actual meaning of two words which have become so used and abused in our daily lives as to become either nearly meaningless, or to be assumed to mean something else entirely, to us. Those two words are:
Americans, and perhaps especially surprising to the people of California, are coming to realize that the word 'Economy', which has become such a sterile and despised term, actually means:
, and that it is most often used as a euphemism to distract you from realizing that. 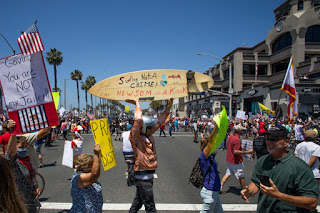 People are discovering that those actions and activities which are extremely essential to providing the means and ability to live their lives, and to take care of their family, friends, interests and all of their material needs, have been deemed 'unessential', and that they themselves are being made to seem paltry and 'selfish' to their fellows, by means of that same term: 'the economy'.

People are also discovering that the entity which most misuses and abuses the term of 'the economy' in an effort to desensitize you towards it, for their own benefit and gain, is: Government.

What people are coming to discover, is that what government actually does, and especially under the cover of that term they'd prefer to remain as meaningless to people as possible, 'the economy', is to use its power to forcibly prevent you from taking a large number of those actions that you think are extremely essential and important to your life, and to do so with little or no reasonable justification for its exerting its power over you, in areas ranging from going to church, to gathering with friends, to supplies you can get at the store, going to the beach, or in whether or not you can go to work to enable your doing everything else.

There's much more involved here to give some serious thought to, but first and foremost I hope that people will now take especial notice that 'The Economy' refers to everything you do in your life and in your relations to your fellows, and that what results from how well or poorly the Government uses its power to uphold (or abuse) your ability to do what you need to do to live your life, is: The Economy.

I'll say that again: What we refer to as 'The Economy', is what results from how well or poorly your government upholds and defends your individual rights.

I'll also point out, once again, that the 19th Century pro-regressive 'Progressive' academic field of 'Economics', was created to conceal that truth, by replacing the field which had been very focused on making that clear: Political Economy.

However accurate or flawed that predictions for the Coronavirus have been, it is a highly infectious, potentially debilitating or even fatal virus, and those saying either that it's the new Black Death, or of little more concern than the common cold or flu, are likely either cranks, opportunists, or people who don't give much thought to what they say. It's important that we remember that as we began to become aware of the examples of China, Iran, France and Italy, it was apparent that there was reasonable cause for concern that our equipment, personnel, and facilities would be overwhelmed if the virus were to hit America in a similar fashion as it did 'over there'. With that in mind, our federal, state and local governments advising of 'Social Distancing' measures, was justifiable (even if many states and localities interpretations and implementations of that policy, were unjustifiable) actions to follow in order to 'flatten the curve'. Today, by the reports I've seen, even in severe hot-spots such as New York City, that curve has been 'flattened' - we have the equipment, personnel and facilities to handle infectious outbreaks.

At this point in time, the potential of a vaccine, or even of easily available tests, are still out of reach. Without discounting the threat of the disease, and without discounting the need for people to behave responsibly around those most vulnerable to it, the curve has been flattened, and it's no longer justifiable for any of our governments to prevent people en masse from going about their lives - some previously unthought of measures may still be warranted, but restraining people from their lives, is now a greater emergency, than the emergency that the virus itself poses to us.

But what people are slowly discovering, thankfully, is that the far more clear and present danger to all of our lives right now, is our not giving our thought and attention to what these terms of 'The Economy' and 'Government' mean, and mean to our lives.