In the previous post, I gave my unpopular opinion that Schools are closed: Why undo the only bright spot in 2020?, and pointed out that the nature of the 'Progressive' redesign of our school systems over a century ago, was systemically in conflict with the nature of the principles which had made America an exceptional nation. With the nature of that experimental system they put in place, it shouldn't be surprising that many graduates of our school systems have lacked a reverence for this nation, or that many of them can be found in many American cities tonight, rioting in the the streets. What should be a little more surprising though, is that 'Progressives', then and now, have enjoyed a degree of popularity with those they termed 'the masses'.

The Progressives in general though, and John Dewey in particular, were adept at making their ideas sound appealing to the 'democratic' public, yet while fans and foes of their ideas still debate the merits and dangers of what was actually meant by some of those theories, Dewey's fellow leaders in 'Progressive' education mostly agreed about how best to put those ideas into practice, and they consistently revealed a shared disdain for 'the masses' of the public they supposedly thought and cared so much about.

For instance, Woodrow Wilson, when still president of Princeton University in 1909, advised the Federation of High School Teachers as being an critical purpose to their teaching:

, a view which was also echoed by James E. Russell, head of Columbia University Teachers College, who gave a speech there in 1905 called "The Trend in American Education", where he expressed his equally 'pragmatic' concern that:


"...How can a nation endure that deliberately seeks to rouse ambitions and aspirations in the oncoming generations which in the nature of events cannot possibly be fulfilled ? If the chief object of government be to promote civil order and social stability , how can we justify our practice in schooling the masses in precisely the same manner as we do those who are to be our leaders?..."

Such sentiments, recently hinted at with 'the soft bigotry of lower expectations', were commonplace amongst the 'Progressives' writings and speeches of the time (and which is still alive and well in our time), and in case you missed the relevance of their intentions to you today, the information age equivalent of fitting 'the masses' to perform 'specific difficult manual tasks', is exactly what is behind the current rage to train 'the masses' in STEM skills, and not in that understanding which our Founder's generation formed themselves, and our nation, through - how could 'the masses' possibly understand Aristotle and Cicero, etc... (as those of the Founder's raised and taught them by their Mother's in the backwoods did - see George Wythe), for the Pro-Regressive's, such a thing was inconceivable. 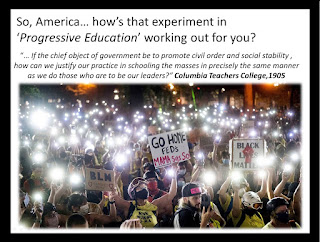 Where such contradictory ideas as those would be a problem for a traditional American's principled thinking - civil war not being out of the question for how to resolve them - it's not at all problematic for the pragmatist (see previous post). For the pragmatist who upholds no principles, and values only doing what empirically 'works' for their own 'expert' purposes, promoting 'Democracy!' to the masses, while using political power to see to it that those masses are trained so as to be easier to be controlled by 'their leaders', was (and is) not a problem for them at all - after all, as they'd tell you: it works.

What I'm hoping is becoming unavoidably clear to you, is that this 'Progressive' understanding was exceedingly common to those who designed the components of our 'modern' school system's, and their theories shaped its districts, buildings, schedules, curriculum, textbooks, tests and standardized tests... which we still 'enjoy' today. That understanding drove our school districts so far from Jefferson's hopes for providing a sound education under local control, to the point that school systems felt justified in seeking and wherever possible taking control over your children, as was expressed by yet another leading 'Progressive' school reformer of the time - yet another that you've probably never heard of (though he had a great deal to do with the life that your education shaped) - as Elwood P. Cubberly, who in 1909 delighted over the fact that


“Each year the child is coming to belong more to the State and less and less to the parent.” 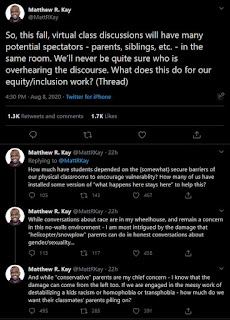 Yes, 1909 was a long time ago, but their intentions were not trapped in the past, and though the past may be forgotten by most of us today, the processes which they set up back then are still actively operating upon us today, and the goal of our school systems from their inception at the opening of the 20th Century, are still largely the same goals and guidelines (though perhaps worded differently) of our school systems here in the beginning of the 21st Century, and they still forcefully shape the actions and intentions of those studying or teaching within them. It should be no surprise to anyone, that a system designed to slyly reform a people into an ideal they weren't fully aware they'd bargained for, would devolve into a system which would support evermore radical ideas being promoted to students without their parents knowledge as their expertise determined was for the 'greater good', such as was recently tweeted out by this teacher in Philadelphia,


"So, this fall, virtual class discussions will have many potential spectators - parents, siblings, etc. - in the same room. We'll never be quite sure who is overhearing the discourse. What does this do for our equity/inclusion work?..."

UPDATE: If you thought that was a one off, or a 'Big City' issue, that's not the case. Here we have a school district in Tennessee, Rutherford County Schools (RCS), that intends to parental signatures on forms, promising not to 'monitor' their children's virtual classes at home:


““RCS strives to present these opportunities in a secure format that protects student privacy to the greatest extent possible, however because these meetings will occur virtually RCS is limited in its ability to fully control certain factors such as non-student observers that may be present in the home of a student participating in the virtual meeting,” according to the form.
“RCS strongly discourages non student observation of online meetings due to the potential of confidential information about a student being revealed.””

That tactic of misleading and patronizing parents (whether of the traditionally minded in 1909, or of the non-woke today), of eagerly assuming proprietary control over their children today, as noted above with Elwood P. Cubberly a century ago, as well as with castigating our society about its perceived 'inequities' and unfair 'privilege', as Dewey himself often had


"...But, most of all, the present industrial constitution of society is, like every society which has ever existed, full of inequities. It is the aim of progressive education to take part in correcting unfair privilege and unfair deprivation, not to perpetuate them...."

These are not new developments! Yes 1909 was a long time ago, but last week wasn't! What this Philly teacher tweeted - and the rest is worse, and is surprising only if you haven't been paying attention - is not anything meaningfully different from what was said a century ago, he's just saying it more rudely and crudely than those who put us on the path to where we are today. The reason why the 'Progressives' of 1909, and the Woke-Folk of 2020, are substantially the same, is because their purposes, problems, attitudes and goals, are systemic to our school system - then, as now.

Yes, there is a systemic problem facing America today, but it has little to do with racism, and everything to do with how our school systems were designed to transform our understanding of ourselves, and of our form of self government, by the means of a reckless experiment that we allowed them to perform upon us in our own government's schools. A bad education is a dangerous thing, and that system which had begun in earnest with the Morrill Acts of 1863 was fertilized with pragmatism by 'Progressives' and, fully entrenched by 1900, bore fruit fast. By 1918, every state in the Union had adopted laws establishing compulsory education, and it should be no surprise that similar sweeping changes followed from fellow 'Progressive's Teddy Roosevelt (R) & (as POTUS) Woodrow Wilson (D), in the form of their Administrative State (now that was bi-partisanship!), as after all, for those who no longer felt fully responsible for what was most valuable to their lives - their children - what fuss would they, or could they, raise over such trifles as undermining their individual rights through a federal Income Tax, the Federal Reserve, Prohibition, or how Senators should be elected?

The effects of those experimental lessons have progressively damaged us in the one area that a nation built upon ideas cannot long survive - our understanding of ourselves. The systemic structure that they reformed our ideas of education and school into, have had a profound effect upon your parents, yourself, your children, and our society, and whatever their intentions might have been and may still be, the fruits they've borne have been disquiet, death and destruction, and it is folly not to judge our school systems by that!

The problem is systemic, it is not simply the fault of teachers; sure there are bad teachers, but there are far more better ones in our school systems, who the system doesn't permit to function fully, or allow to simply teach. The consequences of that century old decision are simply not sustainable, and we cannot afford to let pass on this golden opportunity to put an end to it - by a weird twist of fate and providence, our school systems have been closed - for your sake, for the sake of your children and their teachers, we should keep them closed.

As is proven daily by the well educated 'peaceful protesters' burning down our cities and stopping citizens at gun point on our streets, the 'progressive' experiment in Education has failed, - by their fruits you shall know them - what's your excuse? It's time to correct our mistakes, and surprisingly, we have the opportunity to begin doing so now, and that must begin, as it began back then, in the schools - keep them closed! Close the schools, promote and allow the other options, such as Micro-Schools, which good teachers and concerned parents are driving, and enable their students to be educated as they could and should be.

Keep our school systems closed so that students can get a good education.
Posted by Van Harvey at 10:27 PM