Boil, boil, toil and Biden's Laptop trouble: The Pro-Regressive conjuring of the world into what they don't want you to see

My personal assessment of Joe Biden, is that he, and his family, are thoroughly corrupt - but that's an opinion of mine that has nothing to do with Hunter Biden's laptop, and in fact goes back to the 80's, with his various lies, dishonest and unethical attacks on Supreme Court nominees, bullying of individuals and the press, and that old habit of his of plagiarizing better speakers that forced him to withdraw from one of his 20th Century presidential runs. On top of that, in early 2019 even the New York Times' realized that there had been strong enough circumstantial evidence to suspect the 'impropriety' of the Biden's Ukraine & China deals (until they realized that Biden was all they had, that is), which I would not be surprised to find that Hunter's infamous laptop's will lead to proof of (but that's for the courts - we'll see what we see). But that isn't the issue I have with this despicably dishonest article from NBC. The issue I have with their latest FakeNews article, is its deliberate exercise in spreading Pravda-grade disinformation to save their election, and it is deeply infuriating.

It's not so infuriating for what it says, mind you, but for what it attempts to ensure that you the reader will never  ever think of, should you take their story to heart. 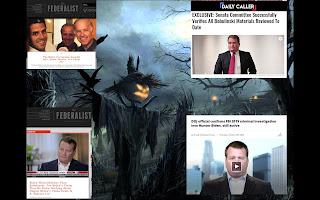 It shouldn't be surprising, especially here in the far end of 2020, where it's become so obvious as the Pro-Regressives daily demonstrate how much they prefer fantasy to reality. They've deeply wanted to believe those vague hearsay charges of 'Russian Collusion!' that told them what they wanted to hear about President Trump for the last four years, and now they want to believe the vague hearsay that tells them what they want to believe about Joe Biden, which they're doubtlessly eager to sustain for the next four(?) years. But the fact that that desire means dismissing out of hand, undiscussed, unexamined, unmentioned, the sizable amount of officially verified materials of physical evidence, and open & corroborated testimony given by actual people publicly identified and on the record, is of no matter to them - what they want reality to be, is what they are intently conjuring 'reality' to be.

Sad. The verbal hocus-pocus they perform to accomplish that, is eminently suitable for Halloween.

This FakeNews story from NBC, is called:

, and it works on focusing it's naïve readers attention on "...a fake "intelligence" document about him went viral on the right-wing internet..." a month ago that is "...an elaborate conspiracy theory..." about the Biden's. It then spends the entire story dwelling on and 'exposing' the flaws in that irrelevant document and its author, and then by elaborating on that theme for the entire article, it manages to entirely ignore the fact that Hunter Biden's laptop has been in the possession of the FBI since December of 2019, ignores the fact that it is acknowledged by the FBI to be part on an ongoing money laundering and corruption investigation, it ignores the fact that the copies of the Hunter Biden's laptop hard drive which has come into the possession of others, have been verified as legitimate by the FBI & the Intelligence Community, and most of all it ignores any mention of the damning email documents which have just been officially verified as being legitimate. They also manage to entirely ignore the official, on the record testimony, of their former business associate, Tony Bobulinski, and the verified nature of his own documents that he's turned in as evidence. [BTW, if you ever wondered what a 'straw man argument' is, that's it.]

As Bill Clinton once famously conjured "It depends upon what the meaning of the word 'IS' is", and the Pro-Regressive's (Left & Right) entire imaginary world depends upon exactly that. This is beyond sad, it's frightening. Happy Halloween.

Understand, I've no problem at all with people questioning the nature and validity of the charges being made against the Biden's. Tony Bobulinski is, IMHO, at best a tainted actor, and his outraged defense of his character and integrity ring at least a little bit hollow to me - he was knowingly doing business with the Biden's & Communist China fer gawds sake (I think some of his outrage comes from Biden's emails that show them cutting him out of some deals and cash)! My problem with this 'article' is that I've never seen a more blatant attempt at faking not only the news, but the contents of the American mind, than this NBC FakeNews story, and that it's doing so with such a transparently ridiculous straw man charge, in order to create the impression that real and officially acknowledged charges, real and officially acknowledged evidence, and real and officially acknowledged investigations, do not in fact exist.

It is truly despicable. There is no hyperbole involved in my saying that this is exactly the scale, scope, and nature of USSR era Pravda. And the media has not needed the power of a totalitarian government, to impose it on us. That should give you pause enough.

For more along those lines, and the Tech Giants as well, I'll recommend Dana Loesh's

When Media Became the Overlords
Who will guard the guards themselves?

For those who're looking for corruption to complain about, this article the self refuting 'NBC News', is the most vile example of media corruption that I've seen yet.

Here's a few related stories for reasserting, or at least discovering, the reality behind the FakeNews's incantations: , and on a very much related note:
Posted by Van Harvey at 10:45 PM