Every four years, on the Tuesday after the 1st Monday of November, We The People after much discussion and debate, come together to hold an election to determine who will be the President of the United States of America. Most people at least have some idea of why they want an election - even if it's just to get your guy in, and get the other guy out - but few seem to give much thought to what an Election actually is. One decent definition to start the thought rolling with, is:

election -[əˈlekSH(ə)n] NOUN: "a formal and organized process of electing or being elected, especially of members of a political body."

It seems obvious that "formal and organized process" indicates laws, rules & steps to be followed, right? Such formal and organized processes provide detailed, mostly mandatory, instructions that cover everything from determining who or what is being voted upon in that election, to how the voting is to occur, how it is to be conducted, and counted, and certified to the satisfaction of all, and it happens to be one area of our Constitution that has undergone the most changes through constitutional amendments, and legislation at the state and local level. Why? So that those processes would comply with how We The People have thought it was important to define, and redefine, and improve those processes over the years. 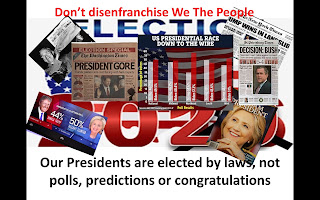 I personally don't think that many of the intended 'improvements' were actually improvements, but that's neither here nor there - those rules are what do define our electoral system, and my thoughts and feelings about them, do not. Do you feel that your preferences and feelings should have that power over our laws? I hope not.

Does it seem reasonable to you that such 'a formal and organized process' as established by We The People to manage those in power over us, should be abandoned mid-way through, because a partial tally plucked out of an ongoing process, suits the designs and desires of one faction of We The People, as having told them all they wanted to hear? Would you put up with calling a baseball game after the 7th inning, or a Super Bowl without knowing the ref's call on the chaotic last second touchdown? Should we really treat an election as something less than a game? Should we permit some of We The People to ignore our formal and organized processes, and essentially say:

"Hey! Hold up! No need to finish, some of us like how things appear right now, so there's no need to continue, how about we just stop and run with that, ok?! Huh? Whatcha think? Some of you like it? Ok, cool, we're done here then, congratulations to the person we wanted to win! The rest of you can suck it."

I'm a hard 'No' on that, as it would mean disenfranchising those voters (all of them, actually) not yet counted or resolved. So what do we mean by that word 'disenfranchised'?:

disenfranchise[ dis-en-fran-chahyz ] verb - to deprive (a person) of a right of citizenship, as of the right to vote.

We The People have gone through a great deal of discussion, debate and effort in order to formally organize our electoral system in such a way so as to ensure that all valid voters can participate in the electoral process, and so that no one will be 'disenfranchised' from the process of casting their vote and having it counted in that election.

So let me ask you: If you declare one candidate to be a winner, congratulate that candidate for winning, before the process of counting and certifying votes in a disputed election is completed, and if you assert that 'The election is over!', when it's not, aren't you effectively disenfranchising those voters whose votes are yet to be counted or resolved?

It's a serious question. Do you have an answer?

I'm asking because nowhere in our formal and organized processes for handling an election, is there any mention made that any consideration should be given, let alone given leave to alter or halt our electoral processes, because of the predictions of popular pollsters or the projections of various news media and pundits. Neither are there provisions made for the feelings of those who're prematurely and jubilantly celebrating what they do not yet have a reason to celebrate - such external considerations are nowhere factored into that formal and organized process which We The People have established, for determining the results of our presidential elections.

Those are legitimate concerns.

Your desire for it to be over with, is not!

Those who are ignoring the electoral process, those who are loudly and publicly congratulating a fictional 'President Elect' and congratulating them for that fiction, those who are demanding that we all behave as if the election is over, are actively serving to disenfranchise their fellow citizens, and to overthrow the will of We The People as a sacrifice to their premature and immature feelings.

Depriving anyone of the civil right to vote which is derived from the nature of being a citizen - whether by preventing their voting, or by discarding their vote, or simply by declaring a 'conclusion' without bothering to count all legitimate votes - those are all actions which effectively serve to disenfranchise We The People of our civil rights as citizens of this nation.

That's should be a big deal. Shouldn't it?

In every presidential election, the entire electoral process is formally carried out and followed through to the end, every time. Even in those elections where the initial numbers seem so obvious to all involved that one candidate has won, and their chief rival calls the winner to concede the election and congratulate the winner, that is but a polite formality which allows all involved to either mope or celebrate and quickly get on with the rest of their daily lives. But even during those niceties, the formal process of carefully counting and certifying the votes, of processing any challenges to the election, from the local level on up to the state level, is all methodically carried out, and only once it has all been determined to have been properly concluded, does the electoral process come to an end - months later - with an official recording of the fact of who won the election.

All of our comfortable TV News elections, from 1960 to 1996, which we sometimes stayed up late to watch, or maybe woke up the next day to find out which candidate had called the other candidate to concede and congratulate his former opponent on winning & promised his support - every single one of those elections, still ran on outside the media, to complete the full electoral process.

Because there were little or no disputes in those elections, many complacent Americans were at some point surprised to discover that those elections were not actually decided on their evening news after they'd voted, but by the electoral college in mid December, and even then were still not officially called and recorded until the incoming congress did so in the coming January. Most people had no clue about that process until things didn't go so smoothly, and a candidate had not conceded (or had conceded, and then reneged on their concession, ala algore in 2000), and only then did so many of us begin to realize how not only inappropriate, but improper, and divisive it was, for someone to have declared one candidate to be the winner, when in fact that had not yet been determined. Doing so would publicly be dismissing the legitimate questions and complaints - not proven, mind you, only legitimately lodged - and inflame still more hostile passions across and throughout the nation.

That was, and is, a bad, and even a dangerous thing to do, doesn't it?

The process of lodging complaints is an important part of the electoral process, to ignore or dismiss them, is playing with the power of political fire.

Our formal and organized process of voting, allows for those citizens involved to monitor the process and if they detect misbehavior, they can and should, call a halt - by law - and have the process investigated. When that happens, it is not only technically wrong to behave as if a winner has been agreed upon and declared, it is an insult and an affront to ALL of the citizenry, both those whose vote has been counted, and those who're being told that their concerns and votes are of no concern to anyone else. To deliberately ignore or inflame the concerns of people who have a legitimate interest in the legitimacy of an election for major political power over their lives, and to refuse to address those legal options that are formally established and organized for the remedying of such issues, is an insanely dangerous tactic to take, and especially so when cities are still in flames over widespread social unrest.

Insane, at best, and something more akin to criminal negligence, is more like it, endangering the peace, property, and lives of all Americans, by sowing the poisonous seeds of discord, leading both the unwary and unwise to believe that all is over and their guy won (a result which is still very possible, and perhaps even probable, but only by adhering to the formal and organized processes of the election), and offering the cruelest of insults to the valid concerns of those who can only see themselves as being disenfranchised by the 'other side', bad blood, and very possibly violence, even rioting, might follow.

And finally, I hope you'll notice that I have not once raised the specific concerns or candidates in this election - these concerns are true and apply across every presidential election.

Those of you - Left, Right & Center - who persist in ignoring our electoral process, who are shouting 'Congratulations!' as if the formal and organized process of our election had run its course, you are not behaving 'in line with a desire to unify and restore trust in the election process', you are not being magnanimous, you aren't even being clever, or 'getting what's yours!' (though you soon may), by celebrating what has not yet been determined. What you are being, is short sighted, rude, negligent fools, foolishly playing with political fires which actively threaten your fellow citizens and communities and ensure that your nation, your people, and very possibly yourselves, will experience extended turmoil, unrest, and very probably even violence.

Shame on you. And in the year of 2020, I feel fairly confident in saying that your presumptuousness and thoughtlessness is going to lead to disastrous consequences for you, and for us all.