Anti-Asian Violence and the Evolving Algorithm of Wokeness

Though I quibble with its emphasis, this is an otherwise spot on response against the latest Woke fad of expressing concern for 'anti-Asian violence':

"...You use our victimhood, turning it into your political gains—whether to infringe on the 2A or keep portraying Trump as that boogeyman. You sided with the rich NBA players over the freedom fighters of Hong Kong. You sided with Disney and NIKE over the lives and the dignity of the Uighurs in western China. You praised Antifa while they harassed and doxxed a gay Asian journalist. You sided with the rioters and looters that stole, robbed, and burned down our shops and businesses all last summer.

Yesterday, we found out the killer in the Georgia shooting rampage is a disturbed young man who is an Asian fetishist. Not exactly the perp that my brother’s friend wished for. I find it twisted and sick that there are a lot of white folks who get a ‘hard on’ for minorities’ victimhood. It’s as reprehensible as someone who has an Asian sexual fetish. Which is confusing—because one moment we are categorized with the ‘Whites’ when we are applying for colleges and universities and we don’t get the same affirmative action benefits of other POC when applying for a job— yet we are marginalized victims again, to serve your political purpose.

So we are just pawns.

My brother told his ‘friend,’ or his ‘ally,’ to snap out of trying to be the white savior...." 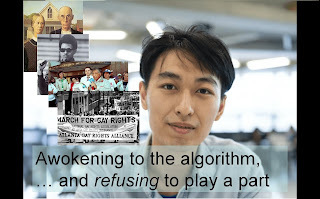 Do not lose sight of the fact that Pro-Regressives - without regard for race, creed, gender, ethnicity, or personal proclivities - will be extremely pleased to put anyone up on a pedestal, and once having put them up there, they'll be equally delighted to praise them, or chain them, or whip them, or engage in any other action, that best serves their purposes in securing more political power by appealing to those other races, creeds, genders, ethnicities, or personal proclivities, whose numbers have the potential of making it worth their while to 'help' them in the very same way.

Pro-Regressives care about every possible grouping of humanity in exactly that degree to which they are useful in preserving and increasing their power. Wokeism is nothing more than the latest evolution of their algorithm for calculating which segments of race, creed, gender, ethnicity, or personal proclivities, are most useful to be curried to, or condemned, in order to secure more power for the Pro-Regressives to rule over individuals with.
Alert readers may have noticed that every race, creed, gender, ethnicity, or personal proclivity are so as individuals first, and if you let Pro-Regressives help you to forget that, then you will become just another useful number in their algorithms. And if you are foolish enough to want to play in their Woke games, you are exactly the fool that they are looking for.
K. Lee is refusing to play a part in the algorithm's Woke power-play. Be like K. Lee.
Posted by Van Harvey at 11:56 AM