It's that time again, to speak truth to the power of the woke folk who fail to give any thought to the discordant noise of their virtue signaling, in prattling on about wanting to change 'Columbus Day', to 'Indigenous Peoples Day' - time to update and re-post this from Columbus Day, 2015, yet again.

Why? For one thing, as the helpful graphic inset between my Columbus Day pictures below shows, to celebrate 'Indigenous Peoples Day' (as our clueless and reprehensibly woke White House does), over 'Columbus Day', necessarily means celebrating the mass slaughter of indigenous peoples, which some indigenous peoples regularly perpetrated upon other indigenous peoples, to further the customs of their own (literally) blood thirsty religions, such as the tens of thousands slaughtered in a single day (on a regular basis) to appease the 'indigenous' people's gods of the Aztecs. One thing that Columbus's discovery of The New World heralded, was the putting of an end to horrors such as that, and no, none of the atrocities typically attributed to 'The West', come even close to that level of savage barbarity. And no, such barbarity and slaughter wasn't limited to the Aztecs alone (or perhaps you were unaware of what Pocahontas's pop was up to prior to the English landing at Jamestown?).

Did some not so good things follow from Columbus's discovery of The New World? Yes. Welcome to human history - and do pay close attention please, because if you're looking for easy answers you came to the wrong world. And for those such as my troll, who try to pass off Christopher Columbus' importance as a creation of 20th Century propaganda, I look forward to your accounting for why it was that the history of America which Thomas Jefferson recommended to students, "The history of the discovery and settlement of America", which was written by William Robertson who died in 1793, devotes chapters to Columbus himself, not to mention his voyages? 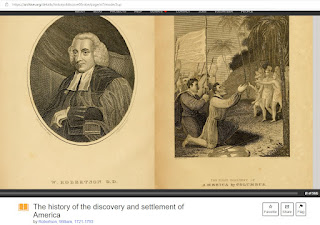 And after years of being bombarded with unsubstantiated charges and hysterical outrage from the most outrageous folks imaginable, I think it's time, even with as small a nod as this is, to explicitly disregard the rantings of the failed and the botched, and to lift a glass of cheer and celebrate the heroic adventures of those who actually dared to do what others feared; deeds which, even though tinged with a great deal of error, led to the greatest advances for mankind in all of our known histories. Celebrate this day, even moreso because everything it represents is loathed and feared today by those who oppose celebrating this day (as the 'Sultan of Knish' said so well) of commemorating the voyage that Christopher Columbus undertook to take in 1492.
In Other Words: To Indigenous Peoples Everywhere:

If what Christopher Columbus ventured and accomplished isn't laudable and self-evident bad-assery to you, begone and darken my door no more, but do so with my Happy Columbus Day! ringing in your ears.
Posted by Van Harvey at 9:53 AM