The 231st Birthday of our Bill of Rights is a weird thing to be divided over. Enjoy! 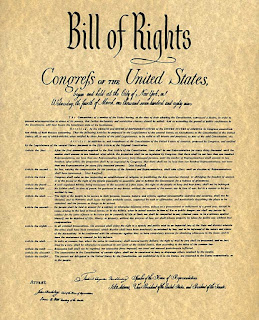 231 years ago today, December 15th, 1791, our states united in ratifying the first ten amendments to the Constitution of the United States of America! How weird is it that many of the individual rights protected by these amendments as being essential to living in liberty - freedom of speech, freedom of the press, freeing religion from government interference - are what We The People are most divided over, and by, today?


The Founders' Constitution
Volume 5, Bill of Rights, Document 12
http://press-pubs.uchicago.edu/founders/documents/bill_of_rightss12.html
The University of Chicago Press
Elliot, Jonathan, ed. The Debates in the Several State Conventions on the Adoption of the Federal Constitution as Recommended by the General Convention at Philadelphia in 1787. . . . 5 vols. 2d ed. 1888. Reprint. New York: Burt Franklin, n.d.
Posted by Van Harvey at 7:52 AM