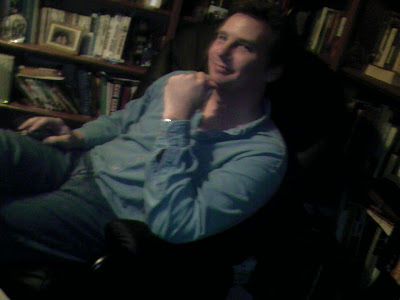 While juggling some heavier balls at the moment, it makes me wonder whether or not lessons of lasting value can only be gleaned from 'deep' material? Is education something that can only happen through approved text books, or time tested classics of literature?

I think Very much - No. Though there is a danger in not ensuring some familiarity with the works of the ages, we'll leave that for later; for the moment, just know that Education - that process of leading you out of bondage, perhaps bondage to constricting beliefs you were either unaware you had, or liberating beliefs you weren't aware existed, is a process that can be encouraged and experienced through any material, event, happening and/or relationship. If you are open to looking for it.

A case in point:

Recently, Deep Thought took to task the story of Star Wars. He thoroughly skins the series of their media hero gloss. Most, if not all, that he notes, is very true. Yoda, Obi Wan, the Rebellion, were all far from perfect, and in many cases thoroughly wrong headed. And the Empire, apart from being more than ok with the thought of wiping out an entire planet to make a point, was far from the evil tyrannical totalitarian dictatorship that we might find in say, Sadam's Iraq, or Hitlers Germany. Next to them, Palpatines Empire could even be seen as a real preferred realpolitik option; I mean, how much different is it than Putin's Russia?

But what educational value if any, can be found in the Star Wars movies? Quite a lot, I think. But where would that educational value be found? Certainly not in the dialog, nor the carefully crafted plot structure. No, its value isn't in its details, and many of its explicit messages I would say are even downright harmful - "Luke, trust in the force Luke, Let go!" all this while he's piloting a super sophisticated, expensive fighter with the lives of millions riding on his judgment and skill. Turn off your mind, relax and float downstream is not a terribly valuable message, either a long time ago, or now.

And no, the value of Star Wars doesn't lay in its mythic-poetic structure - though it is there to be sure, that is just the delivery system to transmit its lessons into your awareness whether you (or the writer/director) are aware of it or not. Joseph Campbell has thoroughly fleshed out the hero cycle which he thinks is critical to the development of each of our own psyche's, so I won't attempt to summarize them here.

No, when you shear off all the Fx, the real core of the story has nothing to do with the Empire or the Rebellion, or even of droids, aliens or lightsabre battles. What it really conveys, is the need for individual character and self mastery, as shown through the primary characters of Anakin/Darth Vader and Luke Skywalker. The evolution of their characters show in negative and positive lessons, the importance of looking at a situation, ultimately, through your own eyes, and of making your own choices because you see them as being correct. Listen to those you respect, sure, but don't slavishly obey them. Star Wars accomplishes this through its core negative illustrations of:

The Star Wars story illustrates the pull of these unbalanced passions upon the soul, and the ways in which they are most easily and seductively encountered. One way is in which those passions are explicitly acknowledged and pursued for their own calculating and lustful sake (Palpatine), those passions which are repressed yet pursued still through 'higher' ulterior motives of 'the ends justify the means' (Jedi), and those passions which if not consciously mastered, will enslave you with their intoxicating heat, and though you might revel in them for awhile, you will ultimately be left dissipated, cold and hollow from their deadening misuse (Anakin/Vader).

Each results in a tyrannical character, either out of calculated greed and power lust to impose your will on others and have them serve you, or through puritanically seeking to impose 'right' behavior on others while denying (to yourself) your own desire to impose your will on them, or through the reckless pursuit of passion for passions sake, which ultimately enslaves you to an outside Master in an attempt to escape responsibility for your own free will.

(By the way, the novelizations of the movies provide some more detail and make clearer what is barely glimpsed or misread in the movies, all at the low cost of reading mostly shallow but fun adventure stories. The novelization of Episode III by Matthew Stover is a cut above the rest (hey, I'm a sucker for anyone that can work quotes from Aeschylus into a story that takes place a long time ago in a galaxy far, far away). He does a nice job of illustrating how the isolated decisions that the emperor maneuvers Anakin into making, positions them in such a way as to ensure they are shorn of any wider context of Good and Truth and Beauty, so that step by step you see him making 'reasonable' decisions along the path of good intentions straight into the open arms of Hell. A fine example of the need for a thorough understanding of your own values, and not just the rules you might otherwise mistake for them.)

Finally, it is in the resolution of these conflicts through the development, actions and decisions of Luke Skywalker, where the positive lessons are to be found.

Luke is the first of any of them to come face to face with the responsibilities of his own Free Will and the necessity of it being exercised over your own passions. Yoda tries to tell him to deny his passions, to abandon his friends, to do what he knows to be wrong, for a 'higher' purpose. Luke, rejects that - and though he perhaps acts rashly charging into Vaders trap, his reasons for doing so are proper. He is responsible for their being in danger, and he won't evade it.

Luke sees his 'Dark Side' in both its masks of Vice and pretended Virtue, faces up to their existence within himself and finally doesn't attempt to evade their existence, but to choose well in the face of them. It points up the ultimate danger of a little knowledge, in that by seeing the failings of both the Sith and the Jedi and unreflectively thinking those to be the only choices, it will leave the naive jaded, and slowly lead them around to the dark side.

The tale also illustrates that being in-touch with your inner 'force' is not enough in itself to save you. It still requires that you be aware of the choices arrayed before you, to choose wisely from among them, and maintain control of your own passions and calculations in order to do what is right and true, because it is right and true and not for some purportedly higher (and ultimately undermining) purpose.

Luke saw both the errors and failings of both sides, as well as his own failings, and so chose not to deny them, but to recognize them for what they were - and to look for alternatives. In the end, he chose Rightly and triumphed. He saw in his Father (and there is much that your own inner myth maker reads into that one) that “there is good in him, I feel it" and pursued rescuing that goodness because it was good and true. Through sober choice and character (though a whiner at the start, he was raised to work - and the old agricultural ethos carries him through), he eventually manages to harness his passions to his Reason, and in so doing brings balance, back to the force, his family (living and dead), and we assume to the Galaxy as well (Plato’s city-state writ large).

And silly Sci-fi or not, those are lessons worth learning.

(Why the picture? Trying to get the darned Blogger profile to work!)
Posted by Van Harvey at 8:16 AM