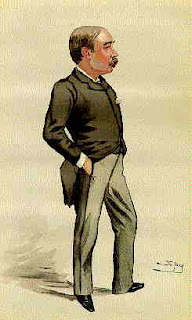 An interesting note, from a fellow named W.H. Mallock, an englishmen and favorite of American Conservative, Russell Kirk (HT: Mytheos Holt via Facebook), who wrote a number of books at the turn of the 19th-20th centuries, one of which was called "A Critical Examination of Socialism (1908)"
I thought it interesting that in this examination written in 1908, he notes at the outset in Chp. 1 that socialism was having its best success at taking root in - which do you suppose American city? Ring your bell if you guessed Chicago,


"... Socialism, on the other hand, has risen and spread thus far, not as a system which is threatening to supersede capitalism by its actual success as an alternative system of production, but merely as a theory or belief that such an alternative is possible. Let us take any country or any city we please—for example, let us say Chicago, in which socialism is said to be achieving its most hopeful or most formidable triumphs—and we shall look in vain for a sign that the general productive process has been modified by socialistic principles in any particular whatsoever. Socialism has produced resolutions at endless public meetings; it has produced discontent and strikes; it has hampered production constantly. But socialism has never inaugurated an improved chemical process; it has never bridged an estuary or built an ocean liner; it has never produced or cheapened so much as a lamp or a frying-pan. It is a theory that such things could be accomplished by the practical application of its principles; but, except for the abortive experiments to which I have referred already, it is thus far a theory only, and it is as a theory only that we can examine it..."

Over one hundred years ago it was already obvious that Socialism was a system of passions bereft of results and in fact fueled by it's failures, and that Chicago was a city primed for embracing it anyway.

America, if we embrace Chicago politics we risk catching a virulent STD from it - Socialistically Transmitted Destruction.

Inoculate yourself now with the only known antidote: Understanding the U.S. Constitution.
Posted by Van Harvey at 11:25 AM

Do you find any irony in the fact that the link you supply to help us understand the Constitution is from a website hosted by the University of Chicago?

I was tempted to get into that, and the Chicago School of Economics which Milton Friedman and others came out of... but I didn't trust myself to be able to keep it short - glad you caught it!


(Catawissa Gazetteer... I swiped your globe... too cool)

Just when I swear off embarrassing blog post titles!

The legalization of pot must be just around the next political corner.