Occupy Yourself In Giving Thanks!

Not to be forgotten, that even the best of men, sincerely seeking to do good, can mistake what they want to be good, for what actually is good. 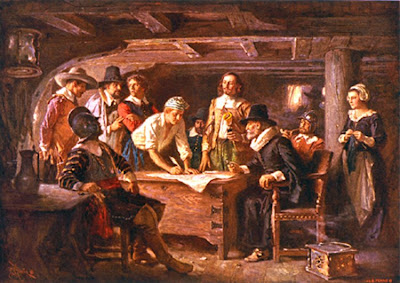 From Gov. Bradford's recollections on the Pilgrims experiment with communism:

"...The experience that was had in this common course and condition, tried sundry years and that amongst godly and sober men, may well evince the vanity of that conceit of Plato's and other ancients applauded by some of later times; that the taking away of property and bringing in community into a commonwealth would make them happy and flourishing; as if they were wiser than God. For this community (so far as it was) was found to breed much confusion and discontent and retard much employment that would have been to their benefit and comfort. For the young men, that were most able and fit for labour and service, did repine that they should spend their time and strength to work for other men's wives and children without any recompense. The strong, or man of parts, had no more in division of victuals and clothes than he that was weak and not able to do a quarter the other could; this was thought injustice. The aged and graver men to be ranked and equalized in labours and victuals, clothes, etc., with the meaner and younger sort, thought it some indignity and disrespect unto them. And for men's wives to be commanded to do service for other men, as dressing their meat, washing their clothes, etc., they deemed it a kind of slavery, neither could many husbands well brook it. Upon the point all being to have alike, and all to do alike, they thought themselves in the like condition, and one as good as another; and so, if it did not cut off those relations that God hath set amongst men, yet it did at least much diminish and take off the mutual respects that should be preserved amongst them. And would have been worse if they had been men of another condition. Let none object this is men's corruption, and nothing to the course itself. I answer, seeing all men have this corruption in them, God in His wisdom saw another course fitter for them."

No matter the zeal and good intentions with which it is entered into, collectivism fails, yet those same moral people, can with liberty, quickly prosper.

There's one heck of a lesson in there for us.... Occupy yourself in giving thanks this Thanksgiving, for living in a nation where you have the liberty to learn this the easy way, rather than the hard way... so far.

Email ThisBlogThis!Share to TwitterShare to FacebookShare to Pinterest
Labels: Thanksgiving

That's a painting of US!