That is what has been happening in Wisconsin, as the will of the people, electing Scott Walker to Governor, and Rebecca Kleefisch to Lieutenant Governor, has been challenged with recall elections. Not because of any wrong doing on their parts, but precisely because they set about doing what they campaigned on doing, and were elected by We The People to do! 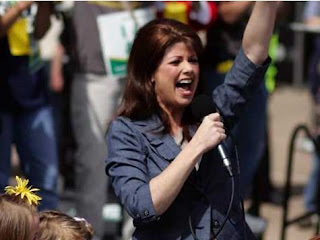 Rebecca Kleefisch is someone who entered politics not for political party reasons, but to put political practices right. That put her at odds not only with the left, but with the GOP establishment as well, which she bucked, and won against, defeating the party favorite in her primary - while also battling and winning against cancer at the same time.

The article linked below details what she's helped to accomplish, and the the money saved, and the red tape cut, and it is well worth reading - and not only by the people of Wisconsin.

The importance of this recall election applies nationwide, the reasons why she is having to battle this trumped up recall election, is something that applies far beyond the Wisconsin electoral map. The proregressive leftists are throwing every dollar and dirty trick and outrageous insult (and no, no call from President Obama over the obscene insults hurled her way) in order to prevent the will of the people from interferring in their power to do what they want, over the clear voice of the people spoken in their original election.

As Dana Loesch put it in her article on Breitbart.com,


"Does any race better embody the struggle between the future of liberty and the iron fist of oppression and tyranny than that of a Wisconsin mom verses the machine?

Make no mistake: a loss in Wisconsin will derail the first generation of reform governors. It will affect every other state, and give the President a singular victory from which to campaign as he slides his failed policies off the table.

Not only that, but a loss for Kleefisch could discourage other women from running for office. Conservative women have been met with a barrage of abuse simply for being conservatives, and Kleefisch is no exception. If other potential female conservative candidates see what the left is capable of doing to one currently in office, don't expect to see them take on the heat of a campaign in the future.

Kleefisch isn't a victim, though; her focus isn't on the "war on women" as much as it is the "war by women," the war the conservative women will wage on big government. Help her."

This election is less about recalling Rebecca Kleefisch, than it is about recalling the voice of the people for real reform. If you want to see the nation put right again, you've got to stand up for those who are trying to do what you know is necessary and right. Your help is needed, if We The People want to see things change for the better, We The People had better stand up and support those who are trying to accomplish the true will of the people - defending the Rights of all of the people.

Real progress and real reform, requires standing with those who stand for your ideals, it requires putting your money where your mouse is - click & help!
Posted by Van Harvey at 8:09 AM