It will be remembered, and realized... no matter how much you'd like to forget

It will be remembered, and realized... no matter how much you'd like to forget

September 11, 2001 will not be forgotten - the lives lost, the destruction, the changes wrought in our lives - they have indelibly marked our lives and our futures. 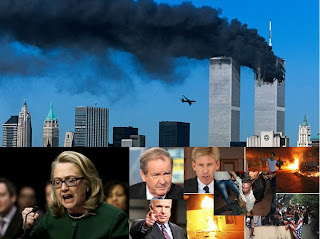 But, the lessons that could have been learned... that's another matter. Even as we successfully recast the event as the tragedy, the loss as the lesson, then the seeds of even deeper tragedy are unavoidably sown.

The lessons that could have been learned have not just been forgotten, but swept aside in hopes that they will be forgotten. Hillary Clinton, in response to questioning before the senate about the administration & her response to events of September 11, 2011, I think sum them up best:


"What difference can it make."

Which is not to say that Pat Buchanan praising President Putin's peaceful offer, or Sen.'s McCain & Graham & Rep. King's pressing for faux-war to 'Send a message!' are no less illustrative of the same eternal refrain. That, that desire, that urge, to ignore what is and what has been happening all around you, what is affecting and even taking lives, all around you, in favor of what you wish were relevant, is a natural trait of mankind and has been for as long as we have been distinguishable as mankind.

The ability to face what we would rather not, is not a natural trait of man, it is an ability whose importance has only been realized on a few occasions in all of history, in only the highest of civilizations, and rarely for an appreciably extended period of time.

But asking 'what difference can it make', and deciding 'not enough', so that you can continue with your preferred concerns, and hoping that what you'd rather didn't make a difference could just be forgotten....

It will be remembered, and it will be realized in fact, probably right about the time you really have forgotten about it.

That's exactly the point which the future will read the history of our time, and cite it as what we were doomed to repeat.

The lives lost, the destruction, the changes wrought in our lives, are horrors that we can never forget, and never should - I only wish the same could be said for what we should have learned, and put into practice every day since then.

Instead we will probably simply continue to ask 'what difference can it make' about something we'd all rather was seen as being unimportant.
Posted by Van Harvey at 9:48 PM

Email ThisBlogThis!Share to TwitterShare to FacebookShare to Pinterest
Labels: 9/11, Benghazi