A moments musing: Spy vs. Spy, Zombie vs. Ghost, ISIS vs. Anonymous - all in all a new state of war?

Musing on - So here's an odd notion to think about - perhaps one of those moments when folks of the future will look back and say 'Wo, we didn't see that one coming!' 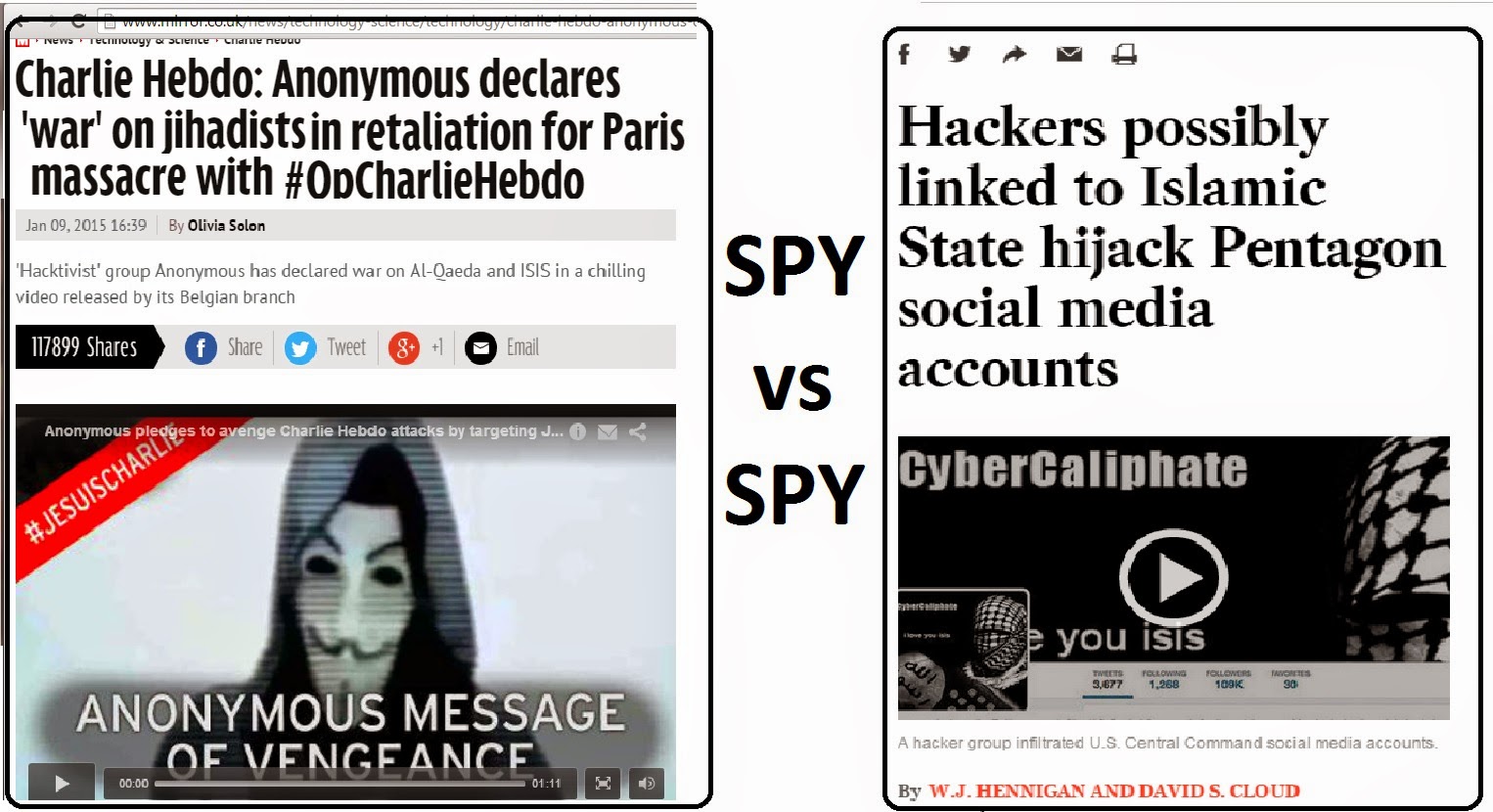 For those who didn't know, the ubiquitous, solid, non-porous structures called the "Nation State", which we all take for granted as being solid and permanent structures, are barely as old as our own youthful nation. Their power and presence following from the ability for government to establish clear borders, and extend its laws over its jurisdiction, without competition - or at least without competition from anything less than another Nation State vying for the same territory through War.

The means and ability of these nation states has rested upon their ability to say what was theirs, and to identify those who openly dispute them. The bugaboo of such states has been the guerilla bands, as Great Britain found out in the American Revolutionary War, as France and America found out in Vietnam, and as the USSR found out in Afghanistan. Etc.

But those guerrillas have always had a physical presence, sometimes tough to nail down, but as they did have actual physical locations, not impossible.

Here, today, we are perhaps seeing the coming irrelevance, or at least what will instigate a major mutation of, the Nation State as we know it, and we're seeing it in the clash of semi-guerrilla/semi-hactivist groups of ISIS/Al Queda, and the entirely amorphous group of hactivists, which call themselves Anonymous.

ISIS supporters having just slaughtered a particularly visible outpost of non-islamism in the French satirical organ of Charlie Hebdo. And feeling their oats, they've also been cyber-attacking American military and press outlets on Twitter and YouTube.


“ISIS is already here, we’re in your PCs, in each military base,” one of the messages read, using an acronym for the Sunni extremist group. “We wont stop! We know everything about you, your wives and children. U.S. soldiers! We’re watching you!”

Anonymous, becoming sensible to the utter lack of fun and hackery which will be available should the islambies manage to get a more sizable politically correct foothold, has issued a cyber-fatwa against the islambies.


"You will not impose your sharia law in our democracies, we will not let your stupidity kill our liberties and our freedom of expression. We have warned you; expect your destruction."

"We will track you everywhere on the planet, nowhere will you be safe. We are Anonymous. We are legion.

"We do not forget. We do not forgive. Be afraid of us, Islamic State and Al Qaeda - you will get our vengeance."

What we are perhaps about to see, is a clash of Spy vs. Spy, of Zombie vs. Ghost, and no doubt it will be played out across the 'territory' which existing Nation States are currently claiming as their own.What, I'm wondering, will happen, if this potential battle happens in real time and real space, while all the while the Nation State finds its ponderous self having no ability to take part in or interact in the battle, little or no ability to control the territory, or even find itself able to identify the combatants whose battlefields and bodies may nonetheless be strewn across their 'jurisdiction'?

That just might pose a problem to the substance of their substance.

Note: I'm not at all being wistful here, for all its flaws, I'm rather attached to the the idea of solid jurisdictions for the Rule of Law.

Here's a question that our current slew of politicians just might want to take a moment and ponder:


"What happens if We The People begin to think that they not only do not listen to us, yet still burden our lives and liberties with their endlessly stupid contests for power over us, and find themselves unable to even secure our lives, liberty, property and ability to pursue happiness?"


Hmmm? Even the seemingly impregnable Nation State requires foundations... if it begins to seem as if those are built upon sand... well... who knows?

Perhaps this will little musing of mine will amount to little more than a moment of Cyber-Poli-Punk speculation. I hope so.

On the other hand... perhaps it's just as possible that we're about to see the next stage in Poly-Sci evolution... or maybe a new instance of webbernetic political regression to a cyber-war of all against all.

Well that was cheery.

Yeah, this is an interesting turn of events. Potentially a black swan?

It occurs to me that one of the things that keeps most decent but increasingly frustrated people from acting in response to a lot of what's happening in the world is that a) we have lives with responsibilities, and so our time is limited, and b) we have something to lose. So tea Partiers really aren't going to throw a Ferguson-style protest when we see the world sinking, and most of us aren't really in a position to have much if any effect on politics or on terrorism.

However, if it starts to seem as though Anonymous is serious and effective against terrorists, for instance, how many people might decide to join in the fray from their computer screens, especially if they think they can't be found? And if they get a taste of that sense of power, what's to stop them from taking action against the government, and anything they see as government malfeasance and ineffectiveness? And then of course, every player is going to have his own agenda...

This could be a very interesting year.

" tea Partiers really aren't going to throw a Ferguson-style protest when we see the world sinking,"

Which is why we're letting the world sink, have have nowhere near the balls of ferguson protesters, which I've been lamenting since the tea party lost relevance.

Also, from the Anons I've seen, they do what they do as a full time job in the 70-80 hours a week range, working globally, often violating draconian laws where they could face centuries of jail time, all to improve our world and often fight liberal authoritarian fascists, so I don't get the lack of responsibility/nothing to lose argument.

I mean, if you do nothing, and things continue on as they are, you think your job, mortgage, or children will mean anything at that point? I'd rather stop things before then if possible.

Julie said "...And if they get a taste of that sense of power, what's to stop them from taking action against the government, and anything they see as government malfeasance and ineffectiveness?..."

Yep. That taste of power has already been ladled out by the media, blessed by academia, and given a stamp of approval by Obama, Holder, MO Gov. Nixon & N.Y. Mayor Deblasio via #Ferguson & the #Ican'tbreath protests/riots, along with the rejection of Justice in favor of Mob Satisfaction.

Add to that the libertarians who support the modern (non-Madisonian/Jeffersonian) sense of Nullification where one state can outlaw the laws of the parent state, and the anarcho-capitalists... and we already have in place all the fixings for turning the mountain of Western Civilization and its secular summit of The Rule of Law, into a most meager molehill.

People have had the bizarre impression that any and all of what we have exists in the printed laws and impressive seeming buildings of Govt. It doesn't, never has, never will. If its ideas don't exist and Live in the hearts and minds of We The People... they will not exist anywhere else either.

All it has been running on for the last several decades, has been habit and the fear of being singled out for not conforming. That's nearly gone now. Remove the fear of retribution too , and you might as well email out a virtual Ring of Gyges (and Sauron) to whoever wants to log on with their grievance.

Hobbits might do well to head for the hills.

An interesting year it will likely be.

Robert,
Fair enough; I claim perfect ignorance of how much time people spend in their activities as "Anonymous."

For clarification, what I meant was that some people may consider it a "safer" and/ or more accessible method of taking action. Going out in public and protesting takes time, usually during normal business hours, and if your face or name ends up splashed across the internet it may have real, direct and personal consequences. Acting from home also carries those issues, but people may find the matter of time to be easier to manage, and the lure of anonymity (even though potentially false) may give some people the added courage they would otherwise lack.

Robert said "...all to improve our world and often fight liberal authoritarian fascists..."

Sorry, you don't get far fighting authoritarian fascists by becoming fascists, you merely hasten the abyss.

And yeah, I have to agree with Van there. Anonymous pretty much seems to be a mob so far. Sometimes they do things that are decent, but just as often they are awful, and occasionally they are awful while claiming decency.