I haven't spent so much time pointing to the uncertainties involved in a contested presidential election (see here, here, here, and here) in hopes of changing the result we've been told should be accepted, but because those uncertainties are there in our laws while most of the American people are either unaware of them, or were denying them, and in some cases people have even been deliberately misleading people about them. As I said before the mayhem began,

"...I raised it because the Electoral Count Act is poorly written, unclear law, which has never been tested in court, and has been left waiting like a roadside bomb for the right circumstances to set it off..."

Well that roadside bomb went off yesterday, and it did so with a blast that left one woman dead inside in our Capitol Building, and the building itself surrounded and overrun, even though the 'oh so wise' amongst us preferred to pretend that that bomb wasn't there and couldn't go off.
So yeah, I absolutely question the wisdom of those who've deemed themselves to be the 'oh so wise' amongst us. 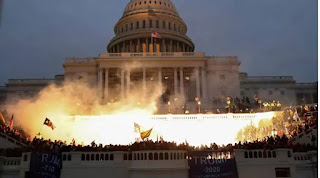 I also question what it is that people think The Law is there for, especially those who consider themselves to be so expert in it. The law is not there, IMHO, so that experts can tell people with grievances to "Stow it, I've read the law and I know that there are several rules and judgements which mean that you haven't a hope of winning, so go away!" One of the primary maxims of the law is to 'Hear the other side', and not only is it not enough to say 'You can't win, go away', but saying so is detrimental to the fundamental nature and purpose of having the Rule of Law in the first place - to provide Justice - and justice cannot be enjoyed if the grievances and defenses of the parties involved are not properly heard.

'There oughta be a law' - because why?
One of the first blockbuster trilogies in the Western world is Aeschylus's The Orestia, which gives a dramatic presentation of the chaos that the passionate and unbounded powers that violent vengeance will devastate a society through. More importantly, it shows how the 'first' Athenian court of law was established so as to contain and direct those dangerously passionate powers, through a rational means of airing grievances by the Rule of Law, which can then safely contain and manage those elemental powers in a society, and enjoy a state of justice.

That's at the core of what our laws do, and why we have them. But for our laws to be able to even attempt to achieve justice, it is important and necessary that the parties to a dispute be provided a means to be heard in a reasonable and methodical manner, by rules of evidence and argument, so that each can feel that they've presented their case as best it could be, so that a reasonable judgement can be rendered. Only then is it possible for both parties to feel - even when losing - that the issue has been resolved in a fair manner.

For that sense of resolution to be achieved and to enable We The People to live comfortably within them, it's necessary that those laws be clear. Whether a law operates at the level of the courtroom, or extends into providing for government to establish and maintain those courts, or involves the larger system of laws for legislating and upholding all of our laws, and/or providing for the security and defense of the land within which those laws apply, the laws must be clear and understandable.

In those cases when our laws are written ambiguously and unclearly, it is one of the purposes of the courts is to identify them as being poorly written laws by rendering opinions on them, so that legislatures can rewrite or repeal those laws. But too often, poorly written laws are not dealt with and they remain 'on the books', and are negligently left there. And too few of us see the problem with that. Such laws pose a danger to us all because their unclear directions and confused purposes, fail to provide an orderly means of containing that power, which is the entire reason for those laws existing in the first place.
That sense of resolution and ease with our laws is essential to our system of government and to the rule of law.
When those on one side of an issue  - especially one which involves the apex of our laws (such as electing its chief executive)  - are told that their grievances will not be heard, even though reasonable person can find a means through those laws they must live with, that they not only should be heard, but that they can 'see a path' to winning the dispute if they were to be heard... well, then your laws (or those telling you to endure them) are not geared to resolving disputes, but to inflaming them.
Unclear laws provide a means for people to imagine 'legally' taking actions which cannot be taken without also abusing the laws and rights of those they were written to protect. Such laws bring about injustice instead of justice, as both parties are given reasons for feeling justified in their positions. Such laws and the confused justifications they encourage, threaten to burst open and release those dangerous societal powers which The Rule of Law was originally intended to contain, and it's likely that they will do so with unpredictable and chaotic results upon all of We The People.
That's where we've found ourselves, courtesy of the recent contested election for the President of the United States of America, courtesy of a set of laws governing those elections which are themselves unclear, confusing, and do nothing but add to the lack of resolution which so many people feel over the election(s) itself.
President Trump didn't just dream up his expectations for wanting Vice President Pence to choose which counts he'd count, he was told by legal scholars that that was a realistic option! Other scholars will say that isn't possible, and still others will give still other conflicting opinions upon the same matter. The Electoral Count Laws were written to resolve a particular set of disputes in counting competing slates of electoral votes. Whatever those law's original intentions may have been, they are unclear and confused in their directions and purposes, so much so that their infamous lack of clarity (legal disputes exist over what they even mean by the words 'count' and 'fail', and worse) have encouraged numerous legal experts to 'find' in them any number of interpretations and justifications for competing and contradictory challenges and actions to be taken in that most dangerous moment of all, the peaceful transfer of power at the very top of our national government.
That my fellow Americans, is a recipe for the very disaster we find ourselves in today, and not only should no one be surprised by it, but our discussions of the last month should have ensured that no one would be surprised by it, but because so many chose to dismiss or ignore it, here we are. Surprise.
I haven't been urging this discussion in order to enable one goal or another to be realized, but so that active discussion and debate would make people aware of the potential confusion and chaos inherent in them, and so provide a means to clarify what could happen, and what would be best to happen, and for our political representatives to be made aware of our awareness and expectations of them, and vice versa.

We did not do that. Many among us refused to even consider ("...it's not a cult! har har...") doing that. Some ignored that, some ridiculed the possibility that anything could 'go wrong' on their merry way to inauguration day and saying 'buh by' to the big bad Orange Man.
But that legal roadside bomb was there, and it was triggered, and it went off in our nation's capitol yesterday with a loss of life and impact on the operations of our nation's government in one of its most critical moments. And that won't be the end of it. One of the many downsides of bad laws is that they provide a means for people feeling justified in unreasonable expectations, which is a veritable nursery for further resentment and turmoil, and if not dealt with, it will soon burst open upon us all once again.

This particular legislative bomb has been present in our laws for over a century, and it's still there actively waiting to explode upon us again in the future, and my advice is that maybe this time we shouldn't behave as if it'll just go away if we ignore it.

There's much more to be said on this, but at the moment I'm out of time. Back later.
Posted by Van Harvey at 12:18 PM

I think any legal expert - if they're really an expert, and not an educated imbecile - will agree any law that is ambiguous, irrelevant, easily abused, or fails to accomplish a specific, necessary task, is useless and dangerous. That, and failing to understand the importance, or necessity of law is equally dangerous. My experience tells me that such laws are never for all people, and only those willing to abuse power find them useful.

Jess said "My experience tells me that such laws are never for all people, and only those willing to abuse power find them useful"

And if not meant so at the start, they are immediately turned to those uses. Sad.

Perhaps people will begin to take notice, I mean, I've heard that a 2x4 to the forehead is supposed to be attention getting, but... we'll see.

Those who willfully abuse their power are the ones who intentionally write the ambiguous laws!