Here's something you don't hear every day: An Economy is not the result of Economic Thinking, and Economic Thinking is not the first, but the last stage in a long train of philosophic thinking (about what is, how you know it, what you should do about it, and how to resolve disputes over that, and why), which, if done well, will result in an economy worth applying economic thinking to. Whether from the Left, Right, Libertarian or Populists today, most are united in ignoring, if not actively evading the truth of this, probably because they sense that confronting it threatens all of their favorite ideologies and assumptions about how the world 'really works'. Yet putting Economics first in our thoughts, as deTracy, Marx, Keynes, Rothbard and others have led us to do, is a folly which has severed us from what we should have been seeking guidance from. To make societal decisions based upon narrow economic expectations, in ignorance of and often in contradiction to that wisdom which Western Civilization has spent thousands of years developing, is a folly which has left our society's back door open to ideologies ranging from Populism to Fascism, and to the chaotic perspectives of those Post-Modern & Critical '[whatever]' Studies which have followed in their wake, and which are now dis-integrating the very nature of life in our society today. 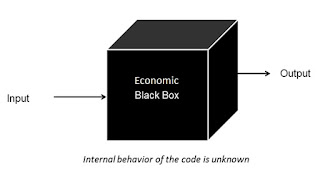 Why we don't want to think about what it is that Economic Thinking enables us to evade thinking of, becomes easy enough to understand when you consider two things: Thinking only in Economic terms about what are philosophic issues, in everything from the minimum wage to foreign aid, provides a Black Box of unlimited power to 'do something!', without the uncomfortable technicalities and ideas of what you should do getting in the way of getting 'something' done. This system is not only desirable to those 'great' folks pursuing control of that black box in seats of power, but is also welcomed by the 'little people' who are pleased to pretend that they have no such power, and so are not responsible for how it is used in their name by the people, parties and issues which they give their support to. To accept the Economic Black Box, the sides of which are constructed out of notions of 'relative truths' and the flattery of seeing ourselves as pragmatic thinkers standing for 'economic principles!', turns a willfully blind eye to the nature of the black box itself, and to the nature of Pragmatism which was designed to escape the 'burden' of thinking either in principles, or beyond the range of the moment. Climbing into that box, naturally curves its sides back in upon itself, enclosing and absorbing the thinker within them, who's then both unable to climb back out and unaware that they should. We don't think outside of the box today because we've become the box, it's become invisible to us, even as its power tempts us everywhere we look to 'do something!' about this, and about that, and about everything else. Truly, unlimited power.

This is, to be sure, a bi-partisan and even tri-partisan enthusiasm, and the results of its inversion are felt no matter how any particular economic coin toss might be called through an election - whether it's 'Heads!' for the utopian Leftists, or 'Tails!' for the 'practical policies' of the Conservative/Libertarian Right, or even landing on that (4th?) Populist edge of policies cherry picked from both traditionalists & utopians - whichever one wins will use the Economic Black Box to transform their own opinions into what '...the meaning of 'is', is', for them, which will then be enforced upon us all.

The Administrative State's unifying partisan divide
If you're in the habit of criticizing those 'other' parties who are harming America, here's something to consider: If our bi, tri, & quad partisan factions were as bitterly divided as it's claimed they are, wouldn't their collisions produce something more than headline noise in the news? After all, when truly divided people of opposing principles and the worldviews do collide in the real world, they have room for little more than open battle - think Hamas & Israel - and those collisions leave very visible marks. Back in the day of the epic clashes between Hamiltonians vs Jeffersonians, even though the broader principles they shared in enabled them to reasonably resolve their differences, the battles they had over which particular steps should be taken down the road they'd mutually agreed upon... they left significant changes in for our judiciary & systems of finance, and more. But in the '*collisions*' of our bi, tri & quad partisan factions today, the agencies of the Administrative State have steadily grown through every administration since FDR - Republican or Democrat - and none of them, not even Reagan, significantly challenged, or even successfully questioned, the wisdom and morality of the Administrative State.

Because while their positions outwardly disagree over 'what should be done', they are all unified in using the Economic Black Box for doing them, and so they have no underlying philosophy for real conflicts to develop out of, they have no principles or convictions to clash over. Doing something, is more important for them than what is being done, which in the end all tends to look very much the same - a sameness which, incidentally, helps their partisan positions to contrast ever more sharply in their next electoral 'clash', where each side will make statements for or against philosophic principles of 'Free Trade!' and 'Liberty!' - whenever a crowd is near enough to hear.

For those 'Libertarians' who'd like to pose as blameless while blaming the other two parties for 'losing their liberty', to do that they've got to ignore the fact that many if not most libertarians are just fine with undermining liberty themselves, so long as they get some personal ju$tification out of it, as with: ... et-friggin'-cettera. A sizable portion of 'libertarians' who shout their 'Principles!', form them from their raw adolescent desire to be 'free from restraint', which they've been equating with 'liberty' since (the Utilitarian, Positivist, Socialist) J.S. Mill, at the expense of what actual Liberty (a society which systematically upholds and defends the individual rights and property of all) is, and requires.

For those who think themselves above the party system because they look outside of the political parties for an 'outsider' to rescue them from its effects, pointing perhaps to President Trump rolling back sizable numbers of regulations (and yes, that was good), I'm sorry to point out that he did so not by persuading the nation to a clearer understanding of what is Right and Wrong, but by using that same Economic Black Box through the power of an Executive Order to 'do something!' because 'it works' - for the moment, a moment which was always unlikely to last longer than the next POTUS to come after him, which, sadly, came sooner, rather than later.

And then there's the erstwhile Populists who congratulate themselves for being more protective of 'the little guy', than the political parties, as they turn their grass-roots public spiritedness into demands that govt power be used to 'do something!' to make life 'more fair' for all, by reforming you (but only the bad 'yous' out there, of course) into what they think that you should do and be. Populists call on govt to use and abuse the very same powers as those they verbally tar & feather as 'socialists!' & 'globalists!', and justify it the same way, with their good intentions for the 'greater good'. Few need the Economic Black Box and the knowledge it helps them evade, more than populists do.

Believe it or not, I'm not being cynical here - I despise cynicism - I'm simply pointing out the reality that most everyone else is so intent upon ignoring. All parties that are party to utilizing the powers of the Economic Black Box, become assimilated into the Administrative State, as it was tailor made for (and made out of) that box, and when its power to 'do something!' is placed in the hands of those at the top - Left or Right, or Libertarian, or Populist or other - they can't help but think, from that perspective, about how those poor dears below them can best be saved from themselves by those they are lucky enough to have in power above them.
The success of this system requires nothing more than that the philosophy of America's Founding be absent from We The People's minds, which, coincidentally, is precisely what our system of education has, largely at the direction of the economically minded, produced: Americans unaware of what America is and means. Nothing has, or will, move beyond or think outside of that black box, so long as the exceptional ideas of America's founding, remain foreign to the Americans living in America.

It should be no surprise that every affiliation that is a party to using the power of the Administrative State's Economic Black Box, will put their faith in the pious use and abuse of its power, to fix the 'other sides' by devoting their time, energy, and passions, to criticizing 'them' for doing the flipside of the very same things that they're seeking to do themselves, and doing so while religiously avoiding looking into the reasons behind what it is that they propose doing.
That was the case in this bit from Tucker Carlson's attention getting monologue from early 2019, where he assured people that 'they can prevail', but:

"...first, Republican leaders will have to acknowledge that market capitalism is not a religion."

True enough, Tucker, true enough. But to do that will also require that you, they, and all of the other 'leaders' in politics and media, and those they are leading, to look inside their precious Economic Black Box, and examine what it is that they've been using it to conceal from themselves, and from everyone else as well.
We'll look into that, and what came before the box, tomorrow.
Posted by Van Harvey at 11:05 PM