MO Gov. Parson gave a speech to MO education administrators recently, which has me feeling a tad ranty. In it, he spoke glowingly of his friend 'Margie', director of DESE (MO Dept of Elementary and Secondary Education), and encouraged MO's poor public school administrators to buck up against the tide of parents who're outraged over their kids being exposed to those ideas that flow out of the sewage of Critical Race Theory, and to 'Stay the course!'. The question to ask, of course, is what course is it that Gov. Parson wants us to stay upon - the American, or the anti-American, course?

We can answer that by looking at the course he's knowingly asking MO's educational system to stay upon, not only what he 'has their back' over, but who he's defending their backs against. He made it very clear that 'stay the course' was the theme of his speech, repeating it over, and over, and over again. And he also made it clear who it is that he's defending their backs against, at the 19:53 mark, telling MO's school administrators that they needn't concern themselves with the concerns of Missouri's parents, whose kids are still (inexplicably) attending public schools in Missouri:

"...Ya stand up, ya do your job, you do what's best for your kids, and you do what you signed up to do, and you're gonna be just fine, people will respect ya - whether they agree with you sometimes or not, but stay the course, stay the course, and the main deal you should be thinking of is what's best for that kid out there, because that's your job, your job's not to make all the parents happy, you're jobs not to get another contract, your job is to take care of those kids in the environment you're in, I think that's the important thing you do..." 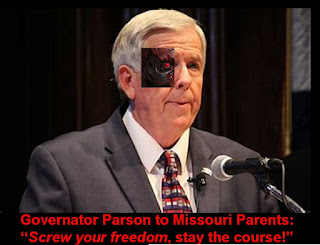 Gov. Parson's message to his administration to 'Stay the course!', almost seems to have anticipated the words of the former Governator of California, in saying to parents 'Screw your freedom', because for DESE & the school administrators, '...your job is to take care of those kids in the environment you're in...', and that environment that those kids are in, is one which 'Margie', and DESE, and the various BOE's, have set up so as to advance their woke concerns of Diversity, Equity & Inclusion, antiracism, SJW, SEL, CRT, Trauma-Informed Schools, etc, for the kids - of course - and if parents don't like it - screw them - stay the course.


To make this clearer, and without my fingers marathoning out a 10,000 word blast, I'll try and let Christopher Rufo do the talking, from his speech to Hillsdale College which ably, and briefly, summarized what's involved in just a few of those concepts:

"...In contrast to equality, equity as defined and promoted by critical race theorists is little more than reformulated Marxism. In the name of equity, UCLA Law Professor and critical race theorist Cheryl Harris has proposed suspending private property rights, seizing land and wealth and redistributing them along racial lines..."

Rufo notes that Ibram X. Kendi, who directs the Center for Antiracist Research at Boston University, says of 'Antiracism', that:

, and Kendi has advocated for a new federal department, that:

"...would have the power to nullify, veto, or abolish any law at any level of government and curtail the speech of political leaders and others who are deemed insufficiently “antiracist.”..."

I've gotta jump back in here for just a second, and suggest that Gov. Parson answer the pop-quiz I sprang the other day:

Gov. Parson: Do you understand that these two statements are saying the same thing?:

"Property must be secured, or liberty cannot exist."
John Adams, 'Discourses on Davila', following his 'A Defense of the Constitutions of the Governments of the United States of America'

"In this sense, the theory of the Communists may be summed up in the single sentence: Abolition of private property."
Karl Marx, 'Communist Manifesto'

To the parents of MO: Do you understand that that is the course that your Governor is telling his school administrators to stay the course upon?!

But of course, there's more - back to Christopher Rufo, who notes

"...Diversity trainers will make an outrageous claim—such as “all whites are intrinsically oppressors” or “white teachers are guilty of spirit murdering black children”—and then when confronted with disagreement, they adopt a patronizing tone and explain that participants who feel “defensiveness” or “anger” are reacting out of guilt and shame. Dissenters are instructed to remain silent, “lean into the discomfort,” and accept their “complicity in white supremacy.” "

"Conservatives in both the federal government and public school systems have told me that their “equity and inclusion” departments serve as political offices, searching for and stamping out any dissent from the official orthodoxy."

Sorry, I can't stay out of it, it needs to be pointed out that there is no common course that can exist between the course of "All men are created equal" and "all [insert scapegoat here] are intrinsically oppressors".

There is no common course to stay upon between the course of "equal rights before the law", and "...An equity-based form of government would mean the end not only of private property, but also of individual rights, equality under the law, federalism, and freedom of speech...".

There is no common course that is conceivable between educating for the purpose of freeing minds from ignorance and preparing them for the responsibility of living in liberty, and believing that teachers should utilize students to be activists for hate-filled partisan ideological propaganda, which those in power believe to be winning propositions for them to 'stay the course' upon.

The governor, who as the head of Missouri's 'Ship of State', does have to choose a course, and rather than choosing one that is reconcilable with a constitutionally American course, he is instead supportive of staying the course of the left turn into radical Pro-Regressivism, socialism, communism, and an unavoidable barbarism, that Missouri has been sailing upon for so very many years now.

Gov. Parson seems like a guy who can count to twenty twice in a row, so the 'too stupid to understand' excuse is off the table for him. Neither is ignorance an option - these policies that are being implemented in his authority are his job to understand, and it's also his job to investigate when his constituents, Missouri's parents, let him know that they have serious concerns over those policies that he is 'staying the course' on. Gov. Parson has told Missouri's parents, that their satisfaction with his policies aren't his concern, and they're not 'Margie's concern, and they're not the administrator's concern. Gov. Parson has instead told his administration that they need only stay the course of the Critical Insurrection being waged upon America, and that it need not be any concern of theirs that doing their job entails pushing100% anti-American and anti-human ideas into the minds of 'their kids' (not the parent's kids, 'their kids').

At the end of his speech, Gov. Parson ramped up his folksy banter by reaching back to the opening of the 20th Century for a presidential quote, appropriately grabbing one from a speech that squares well with the anti-American course that he has determined to stay upon, 'The man in the arena' speech, given by Republican President Teddy Roosevelt. If all you know of T.R. is what you learned from your 'educators', then you should probably educate yourself, yourself, on him, and an excellent place to start is the the speech of his which President Obama celebrated the 100th Anniversary of, T.R.'s "New Nationalism" speech, which made very clear how little he thought of our Constitution, and of our Bill of Rights, and how highly he thought of the socialist-progressive-communist course which is the very same dream of the Pro-Regressive Right that Gov. Parson still wants us to stay the course on today.

Perhaps you think I'm being too harsh. Hardly. Those concepts noted above, such as 'Equity', are bald-faced Marxist obscenities which cannot be implemented without unleashing untold death and destruction, and would in America entail more corruption than a Stalin could ever dream of - and those are but a few of what DESE is busily rolling out and over you and your children today. And to that, Gov. Parson says "Stay the course!".

Perhaps even more telling than the speech he chose to quote from, is the speech of another turn-of-the-century American Republican President that he did not turn to for inspiration from, Calvin Coolidge (perhaps the last president to whom that (R) had real meaning to), and one very good reason why he did not, is because his speeches, such as the 'Inspiration of the Declaration of Independence', are 100% incompatible with the course that Gov. Parson has chosen to stay the course of.

The course that Calvin Coolidge hoped that America would stay upon, was one which understood that:

"...About the Declaration there is a finality that is exceedingly restful. It is often asserted that the world has made a great deal of progress since 1776, that we have had new thoughts and new experiences which have given us a great advance over the people of that day, and that we may therefore very well discard their conclusions for something more modern. But that reasoning can not be applied to this great charter. If all men are created equal, that is final. If they are endowed with inalienable rights, that is final. If governments derive their just powers from the consent of the governed, that is final. No advance, no progress can be made beyond these propositions. If anyone wishes to deny their truth or their soundness, the only direction in which he can proceed historically is not forward, but backward toward the time when there was no equality, no rights of the individual, no rule of the people. Those who wish to proceed in that direction can not lay claim to progress. They are reactionary. Their ideas are not more modern, but more ancient, than those of the Revolutionary fathers..."

That is most definitely not a course that Gov. Parson, or 'Margie', or most of Missouri's school administrators, or a great many of its teachers, want to school you and your kids on.

Parents - why would you not get your kids out - do you really want them to 'stay the course'?!
/rant
Posted by Van Harvey at 10:35 PM