Infrastructure... indeed. Have you wondered about the bizarre contents of the 'Free!' multi-trillion dollar Infrastructure Bill moving through congress, and wondered how the hell studying racial & gender inequities, and green lunches, fit into an infrastructure bill? If so, you were probably lucky enough not to have gone to college, that, or you didn't pay attention in economics or literature classes, when you did. Good for you, that was wise. 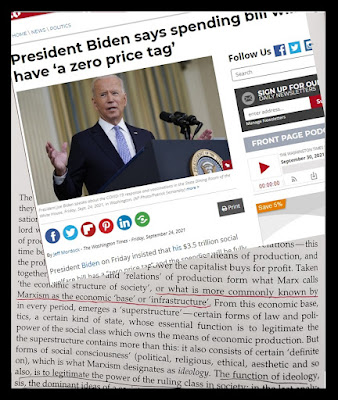 While reading through my daily dosage of bilge (AKA: the stuff our educational system is made of), this passage from an essay written in 1979 jumped out at me, for the way it echoes several excuses I've heard made for how an 'Infrastructure Bill', can cover so much more than roads & bridges. The essay is a very unremarkable one, called 'Marxism and literary criticism', by Terry Eagleton, which for some reason was thought to be worth being compiled into a typical textbook of 'Criticism', of the kind sold for very not-free prices, and used in colleges and high school AP literature courses across the country, published in the year 2000.

The editor introduces the essay with a haughty wink of:

"... Marxism, which in some quarters remains a pejorative term, is in fact an indispensable concern..."

, blah, blah, blah. The essay makes numerous soul corroding observations before coming to the part that jumped out at me, which is underlined in red in the picture above,

"...Taken together, these 'forces' and 'relations' of production form what Marx calls 'the economic structure of society', or what is more commonly known by Marxism as the economic 'base' or 'infrastructure'..."

Yep, to a materialist, a Marxist, a Socialist, a 'Progressive', everything is a thing, from 2x4's, to rebar, to social relations and the doings of bakers, artists, and their fans; even the ones who're confused about their gender or color. All such things are commonly known in Marxist thought, as bits and pieces in the machinery of the economic 'base' or 'infrastructure', to be tweaked and regulated so as to perform as needed by those who know best.

And that's how you, human capital that you are, are viewed by those seeking power over you. And you can rest confident that everything about you is seen as being as dispensable as lightbulbs and coffee grounds, and the earnings of several generations to come. Having a view like that makes it exceedingly easy to view $3.5 Trillion dollar$ as being free. Hey, if our lives aren't any more valuable than things... how could money be? Of course it's as disposable as we are.

How did we manage to become a society that largely hates everything about America, and human life in general? Why, by telling our kids to pay attention in school, and go to college to get a good job!, of course.

How else did you think we got here?
Posted by Van Harvey at 10:38 PM

Email ThisBlogThis!Share to TwitterShare to FacebookShare to Pinterest
Labels: Infrastructure; Value of life