School Board Elections: Brushing off the disinformation of CRT

A pause from the current series of posts, for a short post on our School Board elections. I went 'Nextdoor' to talk with the neighbors about our school board elections, and... that went well. 😎 I endorsed 2 candidates & noted 9 of the most common CRT'rs assertions that I'd seen being made there (and the points below apply in any district), and got my acct temporarily disabled. Some people are touchy. At any rate, our school board elections for Francis Howell School District are coming up on April 5th, and here's what I had to say in regards to the most common misleading comments and assertions of those aligning themselves with CRT, which I'll bet apply in your School Board elections as well - at the very least I hope it doesn't traumatize you: 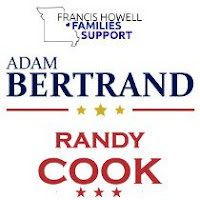 In the Francis Howell School Board election on April 5, I'll be voting for Adam Bertrand & Randy Cook, because their positions are more focused upon the content of our student's education, than on their ideological indoctrination (Randy Cook gave a very informative overview of the issues and his position on them, here).

In anticipation of several questionable statements, I've seen made in opposition to them in other comments here, I'll save some time by making and answering them first in the comments below:

1 - "CRT is a college level law school course, and not taught in K-12!" - CRT (Critical Race Theory) was first defined in legal studies by college professors (Bell, Crenshaw, Delgado...), then in 1995, Gloria Ladsen-Billings, one of the most widely assigned writers in Teachers Colleges for the last several decades, wrote an influential paper called "Toward a Critical Race Theory of Education", which she presented as being a means of injecting Critical Race Theory into the popular form of pedagogy (how teachers teach). Why would she do that? Because CRT is less a class to be taught, than a theory to be implemented in daily life by those who've learned it, and Ladsen-Billings created a pedagogy so that CRT's terms and ideas would guide not only what and how teachers would teach every subject they taught, but how administrative staff would administrate in their schools. To that end she soon followed that paper with her theory of 'Culturally Relevant Pedagogy', and that inspired 'Culturally Responsive Teaching', and several other variants that have since been taught to waves upon waves of future teachers & administrators, across our nation.

Through those and many other means, CRT's theories (such as Intersectionality, and its application through Diversity, Equity and Inclusion) have for decades been taught to those who've become the administrators and teachers in our schools, and who implement its ideals in all grade levels and classes, from math to management, and FHSD is no exception to that. Even the FHSD Board of Education parrots and promotes CRT's tenets of 'systemic racism', 'white privilege', 'antiracism', DEI, and more - see their resolution of the summer of 2020.

The claim that CRT is not in our schools, is either willfully ignorant, or deliberately deceptive.

2 - "They support banning books!" No books are 'banned' by removing inappropriate books from a school library, and unless you would support handing 6yr old's Hustler magazines, then you too support restricting or removing inappropriate materials from students in their school libraries. School Libraries are there to provide materials that support or expand upon the lessons being taught in a school, or to cater to interests deemed appropriate for students to pursue. The question to be asked is "what are the lessons that you want taught, which you think makes particular materials appropriate in a school library?" If you do want overly crude, violent, or pornographic material in school libraries, then you need to explain what those lessons are that you want students to learn or have be reinforced through them, and what you find to be of value in them.

3 - "They're on the wrong side of history, or want to hide from history" - Materials such as the 1619 project are neither history nor journalism, and have been debunked and denounced by actual historians and journalists. The 1619 Project is a narrative of 'lived experiences', written to push an ideological narrative into the minds of unsuspecting students, to turn them into activists (BTW, plain Social Studies has for at least a decade had grade level expectations for student activism that begin in elementary school). History, especially involving those aspects that are uncomfortable or deplorable, should be fully examined so as to learn from them and so avoid their being repeated. There is no excuse for not teaching about slavery, or the atrocities following it (such as the Tulsa slaughter with Black Wall Street), and all should wonder why the largely leftist controlled educational publishing system has mostly minimized or avoided their mention until recently.

History requires facing historical details openly and objectively, without ideological spin. Peddling deceitful rhetoric as history has historically been a dangerous practice and a mistake we should not repeat.

4 - "SEL is an integral part of education and human development" - SEL is a system for manipulating and conforming the emotional attitudes and responses of students to an ideological agenda, at the expense of teaching sound content for students to understand and judge matters for themselves. SEL's stated goal is to promote social justice activism, and if you as a parent or citizen aren't aware of that... you should ask yourself why (BTW, they've been intent on turning students into activists for over a decade, it's only the 'Social Justice' part that they've recently revealed).

5 - "That's racist, they're racist and you're racist!" - Unless you give clear examples of the issue being described as being racist, then your charge is baseless and irresponsible (Racist: One who believes that race determines a person's traits, abilities, and worth, and judging, condemning, or praising a person, based upon their race). Calling them racist, because of the organizations that support them, without giving clear examples of why they are being called racist, is equally invalid and irresponsible. Note: simply mentioning race, pointing out where descriptively relevant, or in questioning the claim that something is valid or invalid because of race, isn't itself racist... and behaving as if it is, is invalid and irresponsible.

6 - "I'm [insert race here] and you aren't, so you don't know ___ and shouldn't talk about it!" - In forums like this we use words to discuss consequential matters, amongst a diverse population; if [insert race here] are the only people who can 'know' what they are talking about on ___, then by that token it can have no meaning to anyone else, and so there's no point in your publicly referring to it any further. If you can't use words to make a case without invoking race to validate it, you've failed to make an argument, and more than likely it wasn't one that was worth making to begin with.

7 - "Equity means equality!" If it meant equality in its normal usage, they'd use the word equality - the reason they use a different word, is because it means something entirely different. Equity is used to demand equality of outcomes, which means and requires ignoring individual merit and hindering or preventing the honest effort that is reflected by individual merit. Good luck finding an example of 'Equity' in this context that doesn't begin by promoting unequal treatment and collective (likely by race, sexual orientating, etc.) behavior.

8 - "Diversity means fairness!" As used by the woke, Diversity in every instance involves dividing people based upon some collective characteristic or trait, at the expense of a targeted group, and subordinates every individual to those claiming to speak for the collective, on behalf of the favored group(s). Fairness is the first casualty of Diversity.

9 - "We should be more inclusive!" - by being inclusive, the woke don't mean being “Welcoming”, their idea of 'Inclusion' means and always requires imposing ‘authentic’ restrictions upon language & actions, based upon some favored collective characteristic or trait, at the expense of all others, which is the exact opposite of being inclusive towards all.

BTW: A couple hearty personal Thumbs Up! for a couple candidates that I know understand what they're up against in nearby school districts:
David Randelman - Lindbergh School District
Izzy Imig - Rockwood School Board
If those are your districts, I hope you'll support them and give them you vote!
Diversity, Equity and Inclusion are incompatible with, and opposed to America's national motto of 'e Pluribus Unum - Out of many, One', and are antithetical to America as such. DEI is the means of implementing CRT's Intersectionality, and as it is explicitly opposed to the concepts of individual rights expressed in our Declaration of Independence, and is fundamentally opposed to the objective Rule of Law, it is incompatible with that system that was adopted to implement justice in America, our Constitution (See their own words on that in: ‘Critical Race Theory: An Introduction, first edition (2001), by Richard Delgado and Jean Stefancic: "... critical race theory calls into question the very foundations of the liberal order, including equality theory, legal reasoning, Enlightenment rationalism, and the neutral principles of constitutional law.”). DEI, CRT, and SEL, are explicitly anti-American concepts, and have no place in the political process in America, let alone in the education of American youth.