Without wasting more time on the yet to be 'decided' races, the nature of the candidates, or their supporters, the fact that these supposedly deeply divided elections are coming down to mere percentage points of differences, indicates that the real battle is less at the ballot (or mail) box, than the classroom. 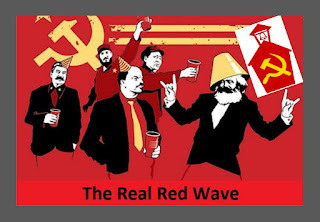 More to the point: Our political battles are rooted between the ears of every American, in the soil of what they understand that 'being an American' means. If the tree of liberty that should grow there is not healthy, then you can be sure that a very real red wave is coming, and in more ways than one.

And if you think that battle can be won politically, you'd best be prepared to be swept away.

If you really want to 'do something!' to help, spend some time considering what 'We hold these truths to be self-evident' actually means, and how 'We The People' are to live under a Rule of Law that respects and reflects that - and most importantly, find others to consider and discuss that with.

Our Foundational Documents aren't magic talismans folks, they are the expression of a particular set of ideas, and if we forget their meaning, nothing built upon them can possibly remain standing.