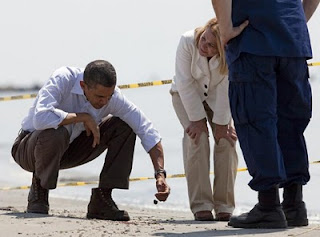 In case you're wondering, while the white sand beaches of the gulf are stained black from an oil spill, and Obamao truly becomes our first Black President (hey, it was such a cheap shot, I couldn't afford not to take it), my position on BP's Oil Spill disaster in the gulf, is that if you have to even ask that question of who is responsible, then you’ve admitted the actual problem - though in today's environment, likely you've done so unknowingly.

First off, in a free market rooted in property rights, the inviolability of contract and individual rights, the responsibility for property and damage done to it, is exceedingly clear.

Once you move away from a free market by introducing the abomination of Govt. partnership with corporations through the process of regulatory agencies and associations, agreements and laws... then although actual responsibility is still clear (if you look for it), the amount of plausible deniability explodes and runs rampant in all areas of operation - day to day functioning and planning, and responses to accidents and disasters, growing in direct correlation to the size of government and it's bureaucracies.

BTW - for those of you out there with your heads in their economic nether regions who actually think that corporations are proponents of the Free Market - philosophically (really... have you ever seen a Corp. H.R. Dept. up close?)- pull your head out and slap it.

Businessmen are in business to produce a product at a profit, and though competition is vital to the market, it is anathema to most businessmen. When they have no other option than to perform and compete under the watchful eye of the market as well as under unobscured and unbeholden legal oversight - they will do so, or perish, according to their ability.

In a Free Market:


Note: a Free Market means one where political favors cannot provide an edge in the market. When it can, it is no longer a free market. We haven't had one here in well over 100 years. If you want to blame our current economic woes on Capitalism... first you've got to find yourself a time machine and go back to the future we abandoned to the Proregressive Era.

If you provide businessmen with escape hatches, via the favors of politicians and Govt. agencies willing to use their political power to provide some businessmen an edge in the market which their own skills aren't able to provide them... the vast majority of those businessmen (not having the benefit of an education which focused upon history, philosophy and constitutional law - especially if they got their 'education' in a university) will take that loophole and perceived edge in a New York Minute.

In fact the speed with which the businessman will pay for political favoritism to provide them an edge in the market is exceeded only by the bureaucrat's and politician's (those two are pretty well equally matched) willingness to propose they be paid for it.

If through the growth of numerous regulatory agencies, their contradictory regulations, various partnerships between corporations and government, and corporations assessment that it benefits their profits to contribute to the political campaigns of candidates from both parties, in all levels of local, state and federal elections… then you will inevitably reach the point where you have to ask what would otherwise be very stupid questions.

The stupid questions at hand being:“…Is it BP's fault? Is it Obama's fault? Should BP be let off…”

Why do I say that?

Well… look at the headline level of facts available to us, which is all we have to go on until a further investigation is completed.

Barring later disclosure of further negligence or even conspiracy on the part of other parties, it starts and ends there.

At least it would under a system of justice centered upon property rights, where contracts (express and implied) were inviolable and operating under a government which adhered to the original understanding of our Federal Constitution, and those of the several States.

However… once you bring in the anti-constitutional developments of rulings, orders and directives issued by various and numerous agencies such as DOE, EPA, SEC, campaign finance (oh yeah… that’s involved too – watch the headlines), as well as congress’s various and numerous laws passed favoring or excusing one party, business, industry, pressure group or another, and extend that over the course of several decades, and then toss into the pot an administration that doesn’t want to bring in additional resources because it might be embarrassing politically… then you will reap the full blown fruits of Big Govt in a mixed economy, which inevitably culminates in finger pointing, obfuscation and even more importantly (and far more predictably) what is likely to come from President Obamao's speech tonight: A move to seize even more power, over the problem it has created, in order to create more loopholes which will enable even more power to be sold and traded.

Think of it as a proregressive agricultural plan for the planting and harvesting of Power.

Watch Obamao's speech tonight, and see if that isn't so.

And as for the people who, in addition to the 11 men killed, are the real victims of BP's disaster, the people and businesses of the Gulf (and we who depend upon them)... if they are looking to the Corporate/Government partnership for relief and Justice... well... a quote from Velociman (TW Joan of Arghhh!) seems very appropriate:


“There ain't nothing we can do as individuals that the government can't do more poorly, more insensitively, and more inefficiently."

PSST! If you are still wondering what my position is:

I doubt that we will have much of an investigation. The elites will substitute "Congressional hearings" for any investigation. They will say horrible things to BP in public while figuring a way to skim off money to fund further expansion of their power.

You're absolutely right about the absence of a free market.

As an aside, every time I think about Obama's "whose ass to kick" statement, I think of Balaam's donkey.

BP is the single oiler who can match it's deep water drilling with the deepest brown-nosing of lefty causes and politicians. Not paying dividends at the moment.