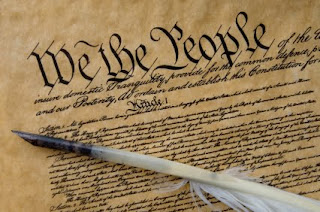 For the Constitution's 224th Birthday, I'm going to repost an old post that seems well suited for today; what with our President reminding us again how much he wished the Constitution wasn't there to keep him from using his power as he'd like,


“"As I mentioned when I was at La Raza a few weeks back, I wish I had a magic wand and could make this all happen on my own," Obama told a meeting of the Congressional Hispanic Caucus. "There are times where -- until Nancy Pelosi is speaker again -- I'd like to work my way around Congress.”

When I asked what the matter was, there was the ‘Oh… you’re not really going to ask me about this are you?’ look, as if I was forcing them to embarrass me… and with a sort of “Yes, the world really is round” patronizing look, he said ,


“Well… it’s just… the whole ‘Constitution’ thing… I mean… we don’t wear wigs and leg hose anymore either, why should we be bound by something written centuries ago by people who know nothing of us?”

Ah. Well… in that case… do you mean we should just ignore the Constitution?


“Well… we can’t ignore it, it’s just that it means today what we need it to, not what they meant it to mean back then... kinda like the Queen of England... quaint but not especially relevant... we shouldn't let ourselves be bound by what guys in wigs said two centuries ago.”

"We shouldn't be bound by it" that's an interesting way of putting it... it certainly goes well with the world upside down nature of the news these days. Does that same sort of bigotry of The Now apply to other things too? Math for instance?"

"Ok... how about resisting tyranny? Is that old fashioned too?"

"Was 'Freedom of speech a bad idea too... or is it that it was useful then, but is just outdated today?"

All I got with that was a sigh. Of course, being a flogger, I didn't let that slow me down, and while I couldn't remember the full quote, I tried the gist of this one from Jefferson,,"


""It would be a dangerous delusion were a confidence in the men of our choice to silence our fears for the safety of our rights... Confidence is everywhere the parent of despotism. Free government is founded in jealousy, and not in confidence. It is jealousy and not confidence which prescribes limited constitutions, to bind down those whom we are obliged to trust with power... Our Constitution has accordingly fixed the limits to which, and no further, our confidence may go... In questions of power, then, let no more be heard of confidence in man, but bind him down from mischief by the chains of the Constitution." --Thomas Jefferson: Draft Kentucky Resolutions, 1798. ME 17:388 "

Got the blank stare for that. "Just not too big on Jefferson, eh?"

Only got an impatient 'Nope'. Just disagree with him and the other wig wearer's?

"So you've read them and disagree with them?" I think he was about to answer 'Yep', but worried that I'd quiz him further (and I would've), but he just said "It's just not as relevant to our world today." I answered that this 'oh so modern' notion of his, is well over a hundred years old now, as many years old as the Constitution was when Woodrow Wilson first mouthed his 'new idea' against it, but that didn't help either, he knocked it down with another eye-roll - apparently some centuries old stuff is 'modern'... and some is 'outmoded'... depending on what the speaker want's it to mean, I suppose - I mean, it's not like words mean anything, right?

Well... I couldn't do much against magic incantations like those modern educated eye-rolls and mutterings, spells which have the power to banish the accumulated wisdom of ages with a simple set of shamanic motions and mutterings. So after a moment I thought maybe I'd try out the meaning of Jefferson's quote on him...rather than just the words,

"Well in that case, it might as well be irrelevant, but if so, then what is the use of the Constitution?

If you're left leaning like yourself, I can see that you probably might be mostly happy with how things are proregressing at the moment... but if you know even only a smattering of political history, even just recent history, you know that following a President Carter, there was a President Reagan, right?; and from the other side of the aisle, the conservatives should know that following such a conservative even as that, there will likely be a President Clinton soon afterwards, or maybe just a mixed message like President Bush (I or II), who might lead into someone like an Obamao.

What that should bring to mind, is that while you may very well be happy with the current bunch in the White house, you may not like the next one, or maybe the one following that, right?

So to prevent a future ‘bad’ administration from doing more to you than you’d like, and vice versa for the other sides point of view, don't you think that there should be limits on those in power to limit whatever it is that they want to do?

Well... handily enough, we do have just such a set of restrictions on the limits of power. Not only do we have such a set, but it is what our representatives and our judges - and even a President such as Obamao - all solemnly swear, pledge and affirm to uphold and preserve it - and in the case of our military personnel, it is what they pledge their very lives to defending against all enemies, foreign and domestic – it is what they are sworn to die for, if need be.

Given that... got any friends or relatives in the military? 'Yep' Given that they, and others, like my son, have their lives sworn to uphold it, doesn't that seem like something they - and we - should take at least a little bit seriously?

At the very least that should give someone pause who might otherwise be tempted to snicker at the mere mention of our constitution, shouldn't it? Nothing else in this land receives such official recognition and is held in such importance and given such legal protection,
...not the President,
...not the Judges,
...not the Flag,
...nor anything else, only this short piece of paper – why?

This Constitution which our government, from its inception in 1787, to now in 2010, finds within this scrap of paper written by old dead white guys, not only every source of every one of its powers to act, but also lays out the key Rights of our fellow citizens that are to be protected, and far more importantly, there are to be found within it those restraints upon what the government can do to We The People and to the country.

If you don’t trust politicians, or you don’t trust the other side’s politicians, then you should want to know, protect and promote this short outmoded piece of paper, because if you don’t, if you allow your politicians, while they are in power, to act beyond what is constitutional – and the ONLY thing which prevents them is the public’s awareness of their going too far (and believe me, it isn’t the Judges or Congress, it is YOU - if the Law ceases to live in We The People, it will cease to live - and cease to protect you) – then you can be assured that there will be even less restraint upon the other guys when They come to power, and they will be even more able to do whatever they want to do because they Too will feel that what they want to do will be the Right thing to do! And your feeble yelps of ‘not fair’ or even funnier (by that time) ‘that’s not constitutional!’ will fall on deaf ears.

And in that time you will find yourself at the mercy of the political power of the other side of the aisle... so ask yourself now, how will you feel then, and what you wouldn’t then give if you could just go back in time to our time, to today, and say – (or in other words vote) - Stop!

If you don’t do that today, then when some seemingly distant tomorrow becomes today – and in the blink of an eye it will - the opportunity may very well be gone.

The Constitution – use it – or lose it!

And that was of course the end of the argument. He couldn't answer... but with another magic incantation of eye-rolls, and muttered '... just can't talk to you people...like luddites', his spell was cast, absolving him from all need to think any further on this uncomfortable topic, and from the need of making his thoughts conform to reality... with the magic spell weaved... his contradictions were safe and secure, locked up within his super smart and cool leftist brain.

It is baffling... the contradictions the leftist requires that they live by. And while it's good to see that it's not just baffling to me, it isn't only Obama that's always contradicting himself, you simply cannot be a leftist, without blatantly contradicting yourself. Leftist thought requires arbitrary, contradictory positions - it fundamentally means opposition to reality.

And your only defense against it, is a piece of paper completed by a bunch of guys in Philadelphia, 224 years ago today.

Happy Birthday to the U.S. Constitution... take a deep breath America, it's a lot of candles... be sure to make a good wish!
Posted by Van Harvey at 10:03 PM

Email ThisBlogThis!Share to TwitterShare to FacebookShare to Pinterest
Labels: Constitution